How Can We Cope with the Dirty Water from Fracking? The nation's oil and gas wells produce at least nine billion liters of contaminated water per day, according to an Argonne National Laboratory report. 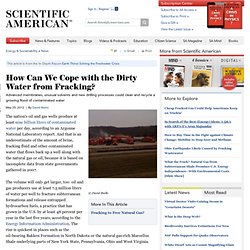 And that is an underestimate of the amount of brine, fracking fluid and other contaminated water that flows back up a well along with the natural gas or oil, because it is based on incomplete data from state governments gathered in 2007. The volume will only get larger, too: oil and gas producers use at least 7.5 million liters of water per well to fracture subterranean formations and release entrapped hydrocarbon fuels, a practice that has grown in the U.S. by at least 48 percent per year in the last five years, according to the Energy Information Administration. The rise is quickest in places such as the oil-bearing Bakken Formation in North Dakota or the natural gas-rich Marcellus Shale underlying parts of New York State, Pennsylvania, Ohio and West Virginia. But this injected water is lost forever. Fracking With Bad Water. 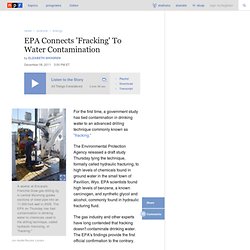 Obama EPA Shut Down Study on Fracking Water Contamination in Texas. Cross-Posted from DeSmogBlog The Associated Press has a breaking investigative story out today revealing that the Obama Administration’s Environmental Protection Agency (EPA) censored a smoking gun scientific report in March 2012 that it had contracted out to a scientist who conducted field data on 32 water samples in Weatherford, TX. 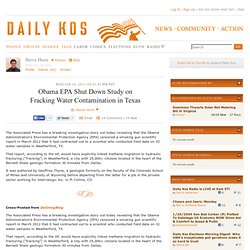 That report, according to the AP, would have explicitly linked methane migration to hydraulic fracturing (“fracking”) in Weatherford, a city with 25,000+ citizens located in the heart of the Barnett Shale geologic formation 30 minutes from Dallas. It was authored by Geoffrey Thyne, a geologist formerly on the faculty of the Colorado School of Mines and University of Wyoming before departing from the latter for a job in the private sector working for Interralogic Inc. in Ft Collins, CO. This isn’t the first time Thyne’s scientific research has been shoved aside, either. US delays finalizing report linking fracking to water pollution. Hydraulic Fracturing of Oil & Gas Wells Drilled in Shale.

What is Hydraulic Fracturing? 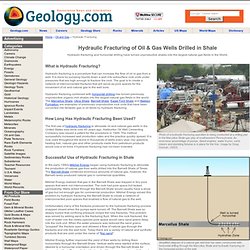 Chemicals and Toxic Materials in Hydrofracking - Interactive Graphic. Wastewater Injection Wells: The Trillion-Gallon Loophole. From ProPublica's Abrahm Lustgarten: On a cold, overcast afternoon in January 2003, two tanker trucks backed up to an injection well site in a pasture outside Rosharon, Texas. 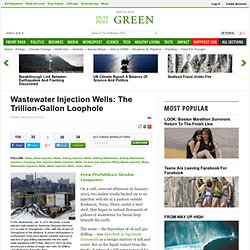 There, under a steel shed, they began to unload thousands of gallons of wastewater for burial deep beneath the earth. The waste – the byproduct of oil and gas drilling – was described in regulatory documents as a benign mixture of salt and water. But as the liquid rushed from the trucks, it released a billowing vapor of far more volatile materials, including benzene and other flammable hydrocarbons. The truck engines, left to idle by their drivers, sucked the fumes from the air, revving into a high-pitched whine. 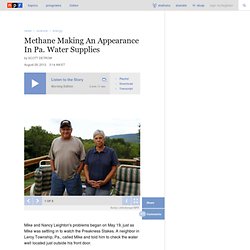 Becky Lettenberger/NPR Hide caption A local well pad in Bradford County has been leaking gas since mid-May, according to state regulators. Gas has been bubbling into this nearby creek since about the same time. Confirmed: Fracking can pollute. One of the key arguments in the case for fracking rests on an appeal to common sense. 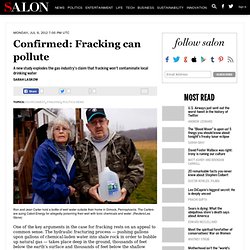 The hydraulic fracturing process — pushing gallons upon gallons of chemical-laden water into shale rock in order to bubble up natural gas — takes place deep in the ground, thousands of feet below the earth’s surface and thousands of feet below the shallow aquifers that provide drinking water. Given the distance between the water and the fracking fluid, there’s just no way fracking could contaminate aquifers, the gas industry and its allies argue.

So many layers of rock lie between noxious fracking fluid and water that the risks of chemical-laced drinking water don’t compute. “Any way you look at it,” one natural gas executive told Fox News, “it is hard to imagine that anything we can do at 6,500 feet would ever approach the surface.” Can fracking contaminate drinking water? - environment - 11 July 2012. The salt of the Earth may hint at trouble for the fracking industry's safety claims, according to a new geological study – although other researchers disagree. 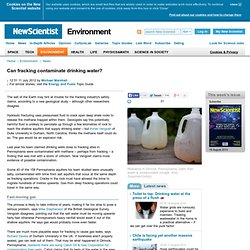 Hydraulic fracturing uses pressurised fluid to crack open deep shale rocks to release the methane trapped within them. Geologists say this potentially harmful fluid is unlikely to percolate up through a few kilometres of rock to reach the shallow aquifers that supply drinking water – but Avner Vengosh of Duke University in Durham, North Carolina, thinks the methane itself could do so. The gas would be an explosion risk. Last year his team claimed drinking wells close to fracking sites in Pennsylvania were contaminated with methane – perhaps from fracking – a finding that was met with a storm of criticism. Now Vengosh claims more evidence of possible contamination. Wastewater Injection Spurred Biggest Earthquake Yet, Says Study.