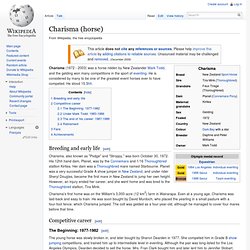 His 12hh hand dam, Planet, was by the Connemara and 1/16 Thoroughbred stallion Kiritea. Her dam was a Thoroughbred mare named Starbourne. Planet was a very successful Grade A show jumper in New Zealand, and under rider Sheryl Douglas, became the first mare in New Zealand to jump her own height. However, an injury ended her career, and she went home and was bred to the Thoroughbred stallion, Tira Mink. Charisma's first home was on the William's 3,000-acre (12 km2) farm in Wairarapa. The young horse was slowly broken in, and later bought by Sharon Dearden in 1977. Mark Todd.

Mark Todd is a famous New Zealand horseman, who has won two Olympic gold medals and received many other honours. 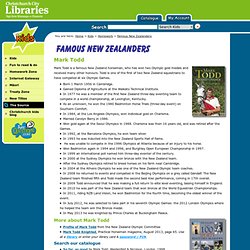 Todd is one of the first of two New Zealand equestrians to have competed at six Olympic Games. Born 1 March 1956 in Cambridge. Gained Diploma of Agriculture at the Waikato Technical Institute. In 1977 he was a member of the first New Zealand three-day eventing team to compete in a world championship, at Lexington, Kentucky. As an unknown, he won the 1980 Badminton Horse Trials (three-day event) on Southern Comfort. More about Mark Todd Profile of Mark Todd from the New Zealand Olympic Committee Mark Todd Knighted, Practical Horseman magazine, August 2013, page 65. Search our catalogue Equestrian links Equestrian sports Our list of equestrian websites on the Internet Gateway. Horsetalk.co.nz A gateway to everything equestrian in New Zealand.

Welcome to Mark Todd Eventing. Mark Todd produces some of his. Last updated 07:49 30/07/2012 Fairfax NZ New Zealand equestrian Andrew Nicholson is scathing of organisers for imposing a controversial weather delay that has cost him a shot at an individual Olympic medal. 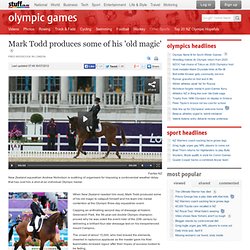 When New Zealand needed him most, Mark Todd produced some of his old magic to catapult himself and his team into medal contention at the Olympic three-day equestrian event. Capping an enthralling second day of dressage at historic Greenwich Park, the 56-year-old double Olympic champion proved why he was voted the event rider of the 20th century by delivering a brilliant four-star dressage test on his inexperienced mount Campino. The crowd of about 15,000, who had braved the elements, cheered in rapturous applause as the master gave his Kiwi teammates renewed vigour after their hopes of success looked to be fading.

Todd is 0.6 points behind Italian Stefano Brecciaroli and only one point behind the leader, Japan's Yoshiaki Oiwa, who scored 38.1 on Noonday De Conde. "Anything can happen. Mark Todd. Mark Todd, born in Cambridge in 1956, is among the most celebrated New Zealand sportsmen, with two Olympic gold medals and three bronzes, and every other major three-day title available to him. 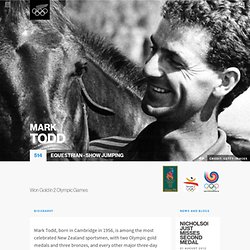 His Olympic career is fabulous. He was first chosen for the Olympics in 1980, but the Americans boycotted those Moscow Olympics, and New Zealand followed suite, so Todd never got to compete. Mark Todd (equestrian) Mark Todd salutes the crowd, having completed his dressage test on Gandalf during the CIC*** event at Barbury International Horse Trials. 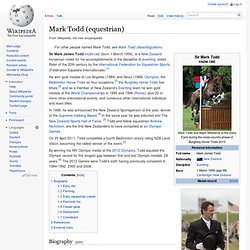 Sir Mark James Todd KNZM CBE (born 1 March 1956), is a New Zealand horseman noted for his accomplishments in the discipline of eventing, voted Rider of the 20th century by the International Federation for Equestrian Sports, (Fédération Equestre Internationale).[1] He won gold medals at Los Angeles (1984) and Seoul (1988) Olympics, the Badminton Horse Trials on four occasions,[2] the Burghley Horse Trials five times,[3] and as a member of New Zealand’s Eventing team he won gold medals at the World Championships in 1990 and 1998 (Rome), plus 20 or more other international events, and numerous other international individual and team titles.

On 25 April 2011, Todd completed a fourth Badminton victory riding NZB Land Vision, becoming the oldest winner of the event.[2] Todd is recognized as a pioneer of three-day eventing in New Zealand.