RECYCLE SUBCULTURE. JOURNAL KX5. France Requires All New Public Buildings to Contain 50% Wood. What you need to know about the Australia bushfires. Australia faced a devastating start to it’s fire season in late 2019, and things swiftly got worse before rains helped contain many of the worst fires in February 2020. 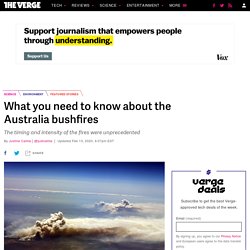 The Verge will update this page with news and analyses. What’s happened so far? Dozens of fires erupted in New South Wales, Australia, prompting the government to declare a state of emergency in November 2019. Fires rapidly spread across all states to become some of the most devastating on record. An area about the size of South Korea, roughly 25.5 million acres, has burned. Summer extends from December to February in Australia, with fire season typically peaking in late January or early February. The fires in New South Wales, the state most affected, were finally declared “contained” on February 13th.

The smoke became another disaster. The smoke reached New Zealand, 1,000 miles away, where it has created eerie scenes atop glacier-covered peaks. IO (2019) Innovative Technology To Combat Climate Change: 7 Exciting Solutions. As an electrical engineer, I’m used to identifying problems and finding technological solutions, and there’s no question climate change is a problem — maybe the biggest problem we’ve faced in generations. 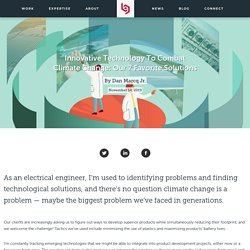 Our clients are increasingly asking us to figure out ways to develop superior products while simultaneously reducing their footprint, and we welcome the challenge! Tactics we’ve used include minimizing the use of plastics and maximizing products’ battery lives. I’m constantly tracking emerging technologies that we might be able to integrate into product development projects, either now or a few years from now. The creative solutions in this post are just entering the pipeline so they’re more on the “a few years from now” end. Each innovative technology is clustered inside one of three categories: Carbon Reduction Technologies, Geoengineering the Larger Environment, and Improved Battery Efficiency and Cooling Tech.

Direct Air Capture by ClimeWorks. The 18 Best Advertisements of All Time. NPR Choice page. Choose Used! In Honor of Earth Day, 8 Fashion Insiders Model Their Oldest, Most-Treasured Clothes. How a Copenhagen Vintage Shop Is Repurposing Old Hotel and Hospital Bedding Into Coats and Bags. In 2016, Rebecca Vera Stahnke left her position as a project manager for Copenhagen Fashion Week in hopes of finding a home for the city’s discarded clothes. 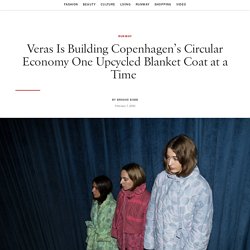 She opened her own resale outpost on a shopping street in the capital’s center known for vintage. Kristen Stewart Trades In Her Clutch for a Cooler Accessory. Choose Used! In Honor of Earth Day, 8 Fashion Insiders Model Their Oldest, Most-Treasured Clothes. The Rise Of Upcycling: Five Brands Leading The Way At London Men’s Fashion Week 2020. Sustainable fashion has gone mainstream with big and small brands alike announcing collections using recycled plastics or other synthetic materials. 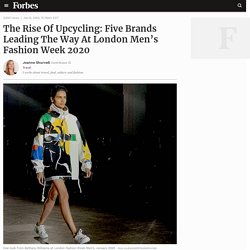 And some brands are going further by implementing upcycling in their annual collections. The main difference between upcycling and recycling is that upcycled clothes have been repurposed from existing clothes whereas recycled clothes are made from materials that have been broken down first. Upcycling is good news for the environment as clothing has the fourth largest environmental impact (after housing, transport and food), according to not for profit UK organisation, WRAP (Waste and Resources Action Plan). 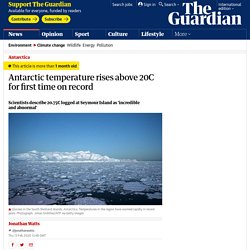 The 20.75C logged by Brazilian scientists at Seymour Island on 9 February was almost a full degree higher than the previous record of 19.8C, taken on Signy Island in January 1982. It follows another recent temperature record: on 6 February an Argentinian research station at Esperanza measured 18.3C, which was the highest reading on the continental Antarctic peninsula. These records will need to be confirmed by the World Meteorological Organization, but they are consistent with a broader trend on the peninsula and nearby islands, which have warmed by almost 3C since the pre-industrial era – one of the fastest rates on the planet.

Brut - Cette architecte transforme les vêtements en matériaux innovants. Would you wear clothes made from rubbish? What will the fashion industry look like in a decade? 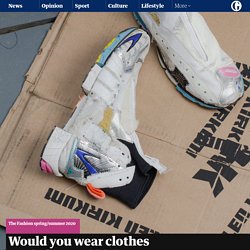 If I had my way, it would have reinvented its approach to ‘waste’, mass-produced fashion would no longer exist and we would value clothes for how they are made, not by whom. I believe this is possible: last year, I launched TRASHMag - a magazine focusing on designers and artists producing ethical work. The nine young innovators here are part of that cohort. From the milliner growing plant-based biomaterials to the designer collaging old trainers, their ideas are blueprints for a fashion future that doesn’t cost the earth. Amelie Gaydoul Fashioning menswear from table linen For her final show at the University of Westminster, the recent fashion graduate produced a visual memoir of history based on her grandmother’s restaurant in southern Germany. Choose vintage, avoid stretch: how to wear jeans sustainably. Konbini news - Vieux rideaux, nouvelles fringues : pour une mode responsable avec les Récupérables.