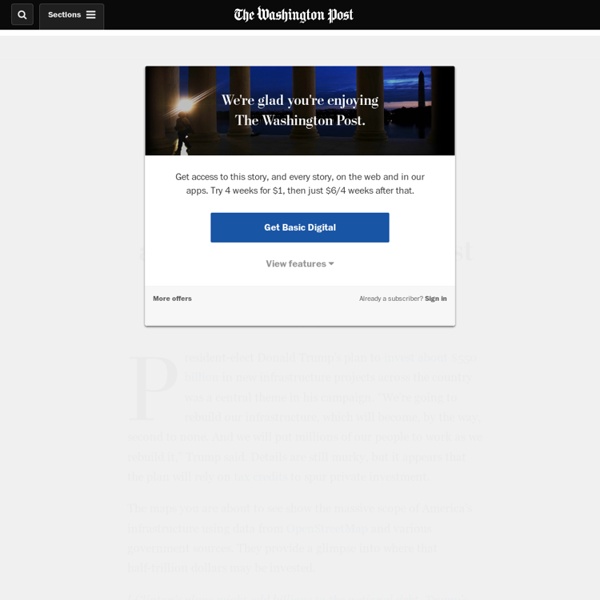 Commute Maps Reveal a US Divided by Megaregions Even if you don’t hate your commute—even on the days free of gridlock, packed buses, and sweaty uphill bike rides—it’s probably tinged by a least a little drudgery. Not your favorite part of day, perhaps? Maybe, though, you'll feel better knowing you're taking part in a powerful economic movement. China's big push for its global trade narrative Image copyright Youtube/Chinadaily China's President Xi Jinping intends to tell you a story. But first he's going to try it out on the world's political leaders. Not those of the United States, Japan, India or much of the European Union. They've declined the invitation.

The Netherlands Sets Up Abortion Fund in Challenge to Trump Policy The Dutch government is already making steps to fill the gap that will be left by US President Donald Trump’s “Global Gag Rule,” a federal ban on all funding to international health organizations that administer or discuss abortion. In response, the Netherlands’ development minister Lilianne Ploumen has announced a plan for a new international fund to finance access to birth control and abortion. “Banning abortion doesn’t lead to fewer abortions,” she said in a statement. “It leads to more irresponsible backstreet practices and a higher death rate among mothers.” “We need to compensate for this financial blow as much as possible, with a broad-based fund which governments, businesses and civil society organizations can donate to — so that women can remain in control of their own bodies.”

*****Shifting Incomes for Young People 1966-2016 Millennials’ income and baby boomers’ income. The story goes like so: The Millennial generation makes less now than the baby boomers did back when they were the same age as the Millennials, based on median personal income. I keep seeing the comparison pop up, but median says so little about the earnings of both generations. 10 Investigative Reporting Outlets to Follow 10 Investigative Reporting Outlets to [...] Dustin Hoffman and Robert Redford as The Washington Post's Carl Bernstein and Bob Woodward in the 1976 film All the President's Men. (Photo by Warner Bros. Inc./Getty Images) Here's Everyone Who's Immigrated to the U.S. Since 1820 From 1820 to 2013, 79 million people obtained lawful permanent resident status in the United States. The interactive map below visualizes all of them based on their prior country of residence. The brightness of a country corresponds to its total migration to the U.S. at the given time.

The average millennial worker makes less than the average baby boomer did in 1975 Demonstrators gather in front of a McDonald's to call for a minimum-wage increase in Chicago on April 15, 2015. (Scott Olson/Getty Images) The United States has enjoyed extraordinary economic progress over the past four decades, but average incomes for today's young workers are lower than they were in 1975. Over the past four decades, young American workers saw their average incomes decline by 5.5 percent after adjusting for inflation, according to new figures published Wednesday by the U.S. Census Bureau. In 1975, workers aged 25 to 34 had a median personal income of $37,000 in modern dollar terms.

Mr. President, We Don’t Support Your Policy on Refugees Dear President Trump, Around the world, 8 million Global Citizens are proudly citizens of both their nations and the whole world. Four million of us are in the United States of America, and today, we want to convey our deep disappointment and disagreement in your Executive Order on “extreme vetting of refugees." As Global Citizens, we know that opposing viewpoints are a vital part of any robust political discussion.