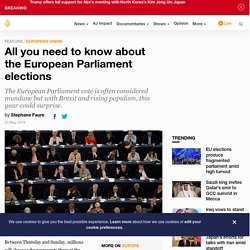 The EU is often considered an obscure and technocratic body - somewhere between a nation-state and an international organisation such as the United Nations. Many have lost faith in its ability to improve their lives. But with Brexit looming and nationalist populism on the rise, this year's election - a political event held every five years - is seen by many as decisive for its future. Britain and the Netherlands kick off voting on Thursday. Here is what you need to know: American Soft Power in the Age of Trump by Joseph S. Nye. The summit of decline: In defence of an Arab league. What is the point of Arab summitry? 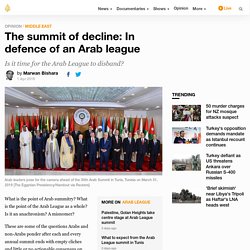 What is the point of the Arab League as a whole? Is it an anachronism? A misnomer? These are some of the questions Arabs and non-Arabs ponder after each and every annual summit ends with empty cliches and little or no actionable consensus on any of the urgent challenges facing the Arab world. Tunisia, like other host states, hoped the Tunis Summit would leave its mark on history for something, anything. The 1967 Khartoum Summit gave us the three no's: no to recognition, no to negotiations, and no to peace with Israel. Are Multinationals Eclipsing Nation-States? by Stefano Marcuzzi & Alessio Terzi. See How Much You Know About the European Union. The UK’s withdrawal from Unesco is historical and cultural vandalism. International NGOs play various roles in global politics; their scope for influence varies as do their legitimacy problems.

The Soft Power 30 Report 2018. Is US monopoly on the use of soft power at an end? Image copyright Getty Images The term soft power was coined by Harvard professor Joseph Nye in 1990. 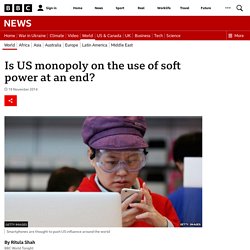 He wanted to dispute "the then prevalent view that America was in decline". Instead, Prof Nye saw a US that "was the strongest nation not only in military and economic power, but also in a third dimension, I called soft power". Eric Liu: How to understand power. State of Power 2016. Introduction Hilary Wainwright Building a real democracy in the face of corporate and financial power will require a rethinking of power and agency, unleashing the creative, experimental, knowledge-sharing and emancipatory approaches of social movements > Read online > Download the pdf Democracy, power and sovereignty in today’s Europe Yanis Varoufakis In a wide-ranging interview, former Greek Finance Minister Yanis Varoufakis, argues that the nation-state is dead and democracy in the EU has been replaced by a toxic algorithmic depoliticisation that, if it is not confronted, will lead to depression, disintegration and possibly war in Europe. 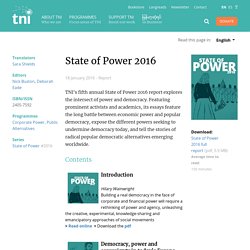 He calls for a launch of a pan-European movement to democratise Europe, to save it before it is too late. > Read online > Download the pdf A global post-democratic order Economics as ideology: challenging expert political power. ASIA POWER INDEX. Joseph Nye: Global power shifts. How China Infiltrated U.S. Classrooms. Last year, the University of North Carolina at Charlotte made an announcement to great fanfare: The university would soon open a branch of the Confucius Institute, the Chinese government-funded educational institutions that teach Chinese language, culture and history. 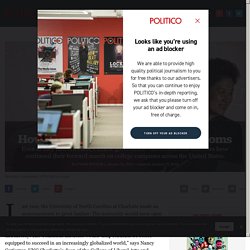 Podcast: "Qatar and the FIFA World Cup 2022: An Attempt to Gain Soft Power" with Danyel Reiche. An audio recording from Danyel Reiche, Associate Professor for Comparative Politics, American University of Beirut and Visiting Scholar at Harvard. 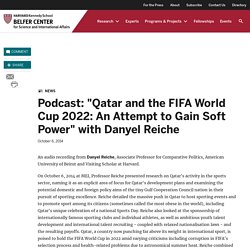 On October 6, 2014 at MEI, Professor Reiche presented research on Qatar's activity in the sports sector, naming it as an explicit area of focus for Qatar's development plans and examining the potential domestic and foreign policy aims of the tiny Gulf Cooperation Council nation in their pursuit of sporting excellence. Reiche detailed the massive push in Qatar to host sporting events and to promote sport among its citizens (sometimes called the most obese in the world), including Qatar's unique celebration of a national Sports Day.

2017 in Sports and Politics: The Return of the Backlash. For over a decade, I’ve written a column in December looking back at the year in sports and politics. 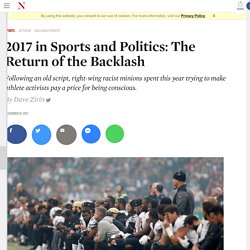 From most of these annual assessments, the stories were comprised of nuggets overlooked by the mainstream sports media, things that generally did not make a blip outside a small circle of those interested in this intersection of sports and politics. The number of people interested that NBA bust Adam Morrison was a Ralph Nader supporter or whether an Egyptian soccer player was asking people to “sympathize with Gaza ”on the pitch, was not exactly large.

Even athletes who made statements against war during the Bush years or spoke out for those left behind after Hurricane Katrina were not discussed with breathless analysis. They were an afterthought. Then, over the last several years, the dream deferred of athletes’ being denied the ability to speak their minds exploded. Here’s what I wrote a year ago: Now, in 2017, we have reached another place. But 2017 saw a different kind of rhyming.