Gerrymandering is basically the perversion of what's known as redistricting, which in turn is supposed to be about the reapportionment of all of our 435 congressional districts. The objective here constitutionally is that all of us are entitled to an equal vote.

And so every 10 years, a U.S. census takes place to figure out how many Americans there are and where they are. And congressional maps are then redrawn to reflect those changes in population with the aim of us all being able to have as equal a vote, say, if I'm in a particular district in Wisconsin as I would if I'm in midtown Manhattan. That's the concept for the redistricting that takes place every 10 years.

Gerrymandering is basically the concept of using redistricting to shape these districts in a way that will advantage whatever ruling party there is. And it is a concept that is as old as - it actually predates Congress, since before the first Congress. Patrick Henry prevailed upon the Virginia legislature to shape his own districts so that it would be to his advantage and that he could win. And the term itself comes from Elbridge Gerry who had been the governor of Massachusetts and in 1812 presided over a reshaping of the maps in the state of Massachusetts that were so warped that one of them looked like a salamander's tail, hence gerrymandering. So that's what gerrymandering is. 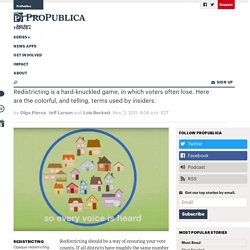 If all districts have roughly the same number of people in them and are drawn to respect natural communities — neighborhoods where people share a heritage, work in the same industry, or just generally feel tied to their neighbors — voters have a chance to be represented by politicians who represent their areas' collective interests. To that end, states are required to redraw lines for districts, all the way from Congress to county boards of supervisors, every 10 years to reflect demographic changes. But that's where theory meets the harsh reality. Instead of voters choosing politicians, redistricting at its worst lets politicians choose voters. Communities can have their influence diluted or overly concentrated by line-drawers interested in partisan gain, limiting minorities' influence, or pleasing powerful interests. Such shenanigans persist, despite the 1965 Voting Rights Act and subsequent legal decisions meant to limit them. The Gerrymanderers Are Coming! Legislative Redistricting Won't Affect Competition or Polarization Much, No Matter Who Does It. 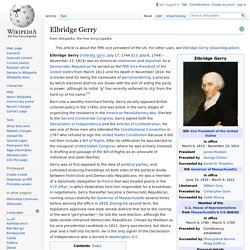 July 6, 1744) – November 23, 1814) was an American statesman and diplomat. As a Democratic-Republican he served as the fifth Vice President of the United States from March 1813 until his death in November 1814. Voters Not Politicians. This computer programmer solved gerrymandering in his spare time. Competitive Congressional Districts. This is a proof-of-concept of an idea from Dr. 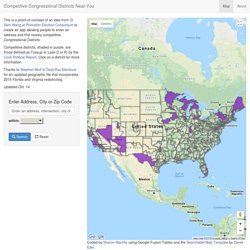 Sam Wang at Princeton Election Consortium to create an app allowing people to enter an address and find nearby competitive Congressional Districts. Competitive districts, shaded in purple, are those defined as Tossup or Lean D or R, by the Cook Political Report. Click on a district for more information. Thanks to Stephen Wolf at Daily Kos Elections for an updated geographic file that incorporates 2015 Florida and Virginia redistricting. Updated Oct. 14. THE LOOMING REDISTRICTING STORM How will the Republican Party Fare? Thomas B. Hofeller, PhD [PDF] The League of Dangerous Mapmakers. Every 10 years, after U.S. census workers have fanned out across the nation, a snowy-haired gentle­man by the name of Tom Hofeller takes up anew his quest to destroy Democrats. 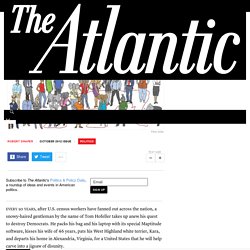 He packs his bag and his laptop with its special Maptitude software, kisses his wife of 46 years, pats his West Highland white terrier, Kara, and departs his home in Alexandria, Virginia, for a United States that he will help carve into a jigsaw of disunity. Where Hofeller travels depends to some degree on the migratory patterns of his fellow Americans over the previous decade. As the census shows, some states will have swelled in population, while others will have dwindled. Newrepublic. 10/27/15: How the Colorado GOP changed the nomination game. Colorado's Republican Party recently changed the rules governing its presidential caucus, expected to occur next March 1. 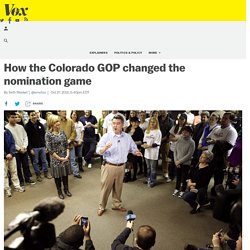 Basically, the caucus will still go on, but there will be no presidential preference vote. These 3 maps show just how dominant Republicans are in America after Tuesday. The Democratic Party is basically on life support in these 10 states. Gerrymandering. Different ways to apportion electoral districts Gerrymandering ( JERR-ee-mand-ər-ing or GERR-ee-mand-ər-ing,[1][2]) is a practice intended to establish an unfair political advantage for a particular party or group by manipulating district boundaries, which is most commonly used in first-past-the-post electoral systems. 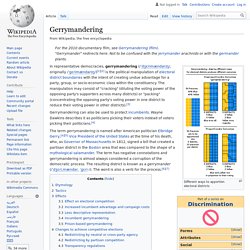 Two principal tactics are used in gerrymandering: "cracking" (i.e. diluting the voting power of the opposing party's supporters across many districts) and "packing" (concentrating the opposing party's voting power in one district to reduce their voting power in other districts).[3] A third tactic, shown in the top-left diagram in the graphic, is homogenization of all districts (essentially a form of cracking where the majority party uses its superior numbers to guarantee the minority party never attains a majority in any district). 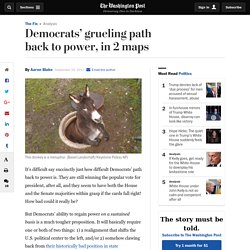 (Basel Landschaft/Keystone Police/AP) It's difficult say succinctly just how difficult Democrats' path back to power is. They are still winning the popular vote for president, after all, and they seem to have both the House and the Senate majorities within grasp if the cards fall right! With Closed-Circuit TV, Satellites And Phones, Millions Of Cameras Are Watching. This is FRESH AIR. 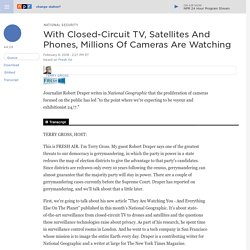 Only you can stamp out gerrymandering (UPDATED 7/30/13) Gerrymandered 4th District Frustrated by a closed process that results in gerrymandered districts, Michael McDonald (George Mason Univ. turnout expert) and Micah Altman (Harvard) together with thinkers like Norm Ornstein have initiated the quite interesting Public Mapping Project to enable citizens’ input on district boundaries for political seats. 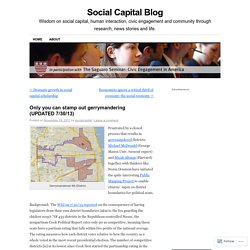 Background: The WSJ on 7/30/13 reported on the consequences of having legislators draw their own district boundaries (akin to the fox guarding the chicken coop): “Of 435 districts in the Republican-controlled House, the nonpartisan Cook Political Report rates only 90 as competitive, meaning those seats have a partisan rating that falls within five points of the national average. The rating measures how each district votes relative to how the country as a whole voted in the most recent presidential election. The number of competitive districts [is] at its lowest since Cook first started the partisanship rating in the 1998 election cycle.”