Bombshell Report from Common Cause: Privatizers Flood New York Politicians with Cash. Please read this report and send it to everyone who cares about the future of public education in the United States. 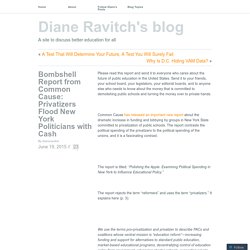 Send it to your friends, your school board, your legislators, your editorial boards, and to anyone else who needs to know about the money that is committed to demolishing public schools and turning the money over to private hands. Common Cause has released an important new report about the dramatic increase in funding and lobbying by groups in New York State committed to privatization of public schools. The report contrasts the political spending of the privatizers to the political spending of the unions, and it is a fascinating contrast. The report is titled: “Polishing the Apple: Examining Political Spending in New York to Influence Educational Policy.” Polishing-the-apple-examing. 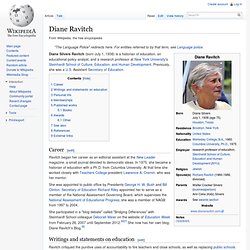 Previously, she was a U.S. Assistant Secretary of Education. Career[edit] Ravitch began her career as an editorial assistant at the New Leader magazine, a small journal devoted to democratic ideas. In 1975, she became a historian of education with a Ph.D. from Columbia University. How Does Rhee Sleep at Night? NYbooks: The Two Faces of American Education by Andrew Delbanco. 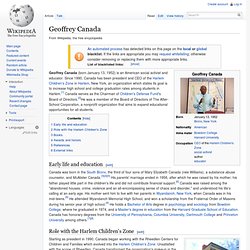 Since 1990, Canada has been president and CEO of the Harlem Children's Zone in Harlem, New York, an organization which states its goal is to increase high school and college graduation rates among students in Harlem.[1] Canada serves as the Chairman of Children's Defense Fund's Board of Directors.[2]He was a member of the Board of Directors of The After-School Corporation, a nonprofit organization that aims to expand educational opportunities for all students.

Early life and education[edit] CNN: U.S. public education: A race to the bottom? Analyzing President Obama’s Education Interview with NBC. Yesterday I posted an interview in which President Obama expressed his views about education. 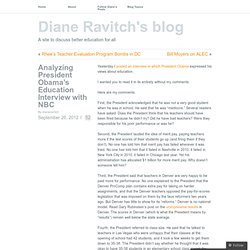 Chicago Teachers Union Vs. Astroturf Billionaires. “Poverty Is the Problem”: Efforts to Cut Education Funding, Expand Standardized Testing Assailed. JUAN GONZALEZ: As children across the nation head back to school, we turn now to a number of recent developments in education news. 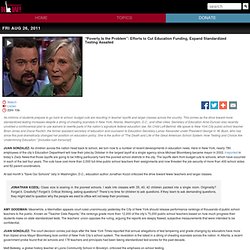 Here in New York, nearly 780 employees of the city’s Education Department will lose their jobs by October in the largest layoff at a single agency since Michael Bloomberg became mayor in 2002. I reported in today’s Daily News that those layoffs are going to be hitting particularly hard the poorest school districts in the city. The layoffs stem from budget cuts to schools, which have occurred in each of the last four years. The cuts have cost more than 2,000 full-time public school teachers their assignments and now threaten the job security of more than 400 school aides and 82 parent coordinators.

At last month’s "Save Our Schools" rally in Washington, D.C., education author Jonathan Kozol criticized the drive toward fewer teachers and larger classes. List of all the Educational Chats on Twitter. Charters get $55 million for upkeep, other schools get zero. Traditional public schools in Florida will get no money from the state this year for additions or needed repairs to thousands of aging buildings, but charter schools will score big. 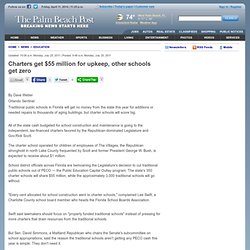 All of the state cash budgeted for school construction and maintenance is going to the independent, tax-financed charters favored by the Republican-dominated Legislature and Gov.Rick Scott. The charter school operated for children of employees of The Villages, the Republican stronghold in north Lake County frequented by Scott and former President George W. Bush, is expected to receive about $1 million. School district officials across Florida are bemoaning the Legislature's decision to cut traditional public schools out of PECO — the Public Education Capital Outlay program. Msnbc: Matt Damon rewrites attack on teachers. President Obama’s unusual education roundtable - The Answer Sheet.

President Obama hosted an education roundtable at the White House on Monday and I’ll give you one chance to guess who wasn’t high on the guest list. 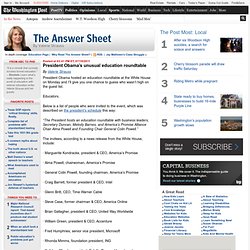 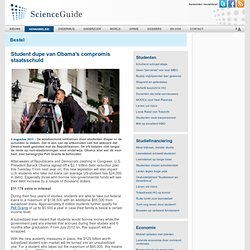 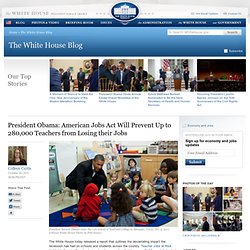 (Official White House Photo by Pete Souza) The White House today released a report that outlines the devastating impact the recession has had on schools and students across the country. Teacher Jobs at Risk highlights the significant cuts in education spending that have resulted from state budget shortfalls since 2008, including the loss of nearly 300,000 teaching jobs across the country (see chart below). University World News - US: Mixed victory for students under Obama loan plan. Marching along the shaded valley beneath skyscrapers housing major bank headquarters in midtown Manhattan, some students in the Occupy Wall Street movement said United States President Barack Obama's new loan plan was too little too late, with real savings totaling no more than $10 a month per low-income borrower. 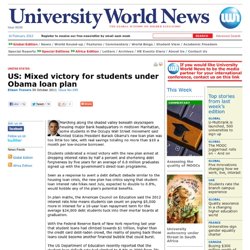 Students celebrated a mixed victory with the new plan aimed at dropping interest rates by half a percent and shortening debt forgiveness by five years for an average of 6.8 million graduates signed up with the government's direct-loan programme. Seen as a response to avert a debt default debacle similar to the housing loan crisis, the new plan has critics saying that student loan interest rate hikes next July, expected to double to 6.8%, would hobble any of the plan's potential benefits. The US Department of Education recently reported that the student loan default rate had climbed to 8.8% in 2009 from 7% the previous year, before the financial crisis.

"Who does debt benefit? "

For more than a decade now we have heard that the high-stakes testing obsession in K-12 education that began with the enactment of No Child Left Behind 11 years ago has resulted in high school graduates who don’t think as analytically or as broadly as they should because so much emphasis has been placed on passing standardized tests. Here, an award-winning high school teacher who just retired, Kenneth Bernstein, warns college professors what they are up against. Bernstein, who lives near Washington, D.C. serves as a peer reviewer for educational journals and publishers, and he is nationally known as the blogger “teacherken.” His e-mail address is kber@earthlink.net.