Catich.sau.edu/catichcollectiontips.pdf. Magazine: The music of words (1/2) By Laurie Lindquist His business card, written in Renaissance italic, reads “priest and calligrapher.” 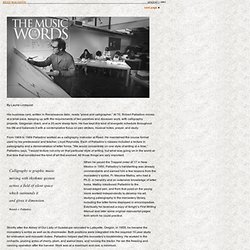 At 70, Robert Palladino moves at a brisk pace, keeping up with the requirements of two parishes and diocesan work, with calligraphy projects, Gregorian chant, and a 20-acre sheep farm. He has kept this kind of energetic schedule throughout his life and balances it with a contemplative focus on pen strokes, musical notes, prayer, and study. From 1969 to 1984 Palladino worked as a calligraphy instructor at Reed. He maintained the course format used by his predecessor and teacher, Lloyd Reynolds. Shortly after the Abbey of Our Lady of Guadalupe relocated to Lafayette, Oregon, in 1955, he became the monastery’s scribe as well as its choirmaster.

His calligraphic duties expanded from signage—extensive in a silent monastery—and graphic work for the choir to include projects for others, such as the Benedictine Press at Mount Angel Abbey. University of Portland. Next page. Paul Shaw Letter Design » Reviews. Wp-content/uploads/2012/10/ChronologicalHistoryLetteringPublications.pdf. Commercial lettering copybooks in Britain. *First published at Congreso Internacional de Tipografía de Valencia, Valencia, June 2010, as: “Lettering comercial en Inglaterra. 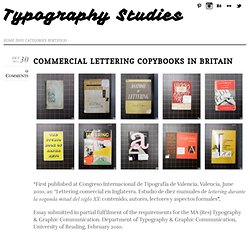 Estudio de diez manuales de lettering durante la segunda mitad del siglo XX: contenido, autores, lectores y aspectos formales“. Essay submitted in partial fulfilment of the requirements for the MA (Res) Typography & Graphic Communication. Department of Typography & Graphic Communication, University of Reading, February 2010. Introduction Since man’s need to undertake commercial transactions, publicising one’s wares with the aim of selling them has been essential. The purpose of this essay is to analyse the presentation of the art of commercial lettering through manuals written during the 1940s to the 1960s, with two exceptions from 1895 and 1932, which are useful as historical background. 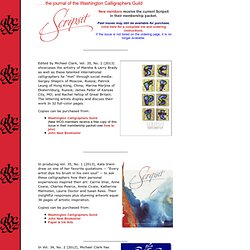 The lettering artists display and discuss their work In 32 full-color pages. Copies can be purchased from: In producing Vol. 35, No. 1 (2013), Kate Irwin drew on one of her favorite quotations -- "Every artist dips his brush in his own soul" -- to ask these calligraphers how their personal experiences inspired their art: Carrie Imai, Anne Cowie, Charles Pearce, Annie Cicale, Katherine Malmsten, Laurie Doctor and Iuean Rees. Their insightful responses plus stunning artwork equal 36 pages of artistic inspiration. The Fall 2009/Winter 2010 Scripsit (Vol. 31, No. 2&3) is a special double issue, running 48 pages plus covers. 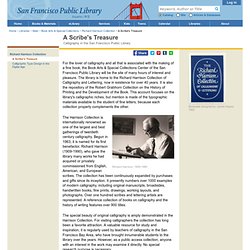 The library is home to the Richard Harrison Collection of Calligraphy and Lettering, now in existence for over 40 years. It is also the repository of the Robert Grabhorn Collection on the History of Printing and the Development of the Book. This account focuses on the library's calligraphic riches, but mention is made of the typographic materials available to the student of fine letters, because each collection properly complements the other. Richard Harrison, 1909-1990 The Harrison Collection is internationally renowned as one of the largest and best gatherings of twentieth century calligraphy. The special beauty of original calligraphy is amply demonstrated in the Harrison Collection. Stanley Morison - Font Designer of Times, Times New Roman, Times Ten … Category:American calligraphers. The Calligrapher. Calligraphy : Activity. Donald Jackson.