Tap, Tap, Tap: A Secret Love No Longer. As a young gay man, growing up in a small, conservative town in Montana wasn't easy. 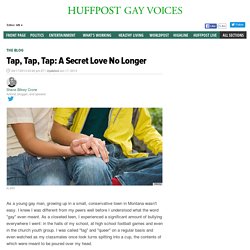 I knew I was different from my peers well before I understood what the word "gay" even meant. As a closeted teen, I experienced a significant amount of bullying everywhere I went: in the halls of my school, at high school football games and even in the church youth group. I was called "fag" and "queer" on a regular basis and even watched as my classmates once took turns spitting into a cup, the contents of which were meant to be poured over my head.

Once an outgoing, confident and happy child, I quickly became a depressed, hopeless and lost teenager who did not want to continue living in a world so full of hate. For too long I had been treated horribly, belittled and made to feel like less than I was, simply for being gay. Listen: 90 year old gay man talks of his long struggle with his sexuality. Ninety-year-old Hector Black talks of his long road to coming out as gay.

Hector Black has lived a long and interesting life, as a husband, friend, father – and closeted gay man. Following the brutal murder of his daughter, he opened up for the first time recently about his lifelong struggle with his sexuality – and why he didn’t come out until he was 70 years old. Black begins by telling interviewer Ari Shapiro that there wasn’t even a word for the feelings he felt when growing up. “No word for it at all. I had nothing. “The word gay was never even mentioned, or even homosexual. The first time Black realised there were other “people like him” was during his time at university in the 1940s. That was also where he had his first sexual experience – something he was initially horrified by. “I thought this is not me. “And then, you know, after a few months, I started thinking about it and then I realised that I’d wanted to experience this again. Why should gay rights depend on being ‘born this way... Last month, the US Supreme Court affirmed the rights of same-sex couples to marry. 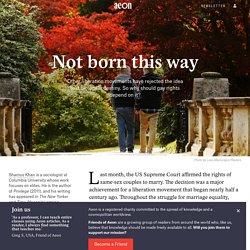 The decision was a major achievement for a liberation movement that began nearly half a century ago. Throughout the struggle for marriage equality, supporters drew parallels with the oppression of African Americans, be that anti-miscegenation laws or legalised segregation. Yet one stark difference between these civil rights movements has escaped notice. African-American activists aggressively called out arguments about genetic and biological differences as legacies of racist, Nazi science. By contrast, the marriage-equality movement has embraced biological determinism. The proffered perspective is that sexuality is not a choice, but a way we are born. Updates on everything new at Aeon. While this biological determinism of sexuality has been associated with a great triumph for the gay-rights movement, it’s been a great loss for our public discourse.

Alex Ross: Love on the March. The week after Barack Obama was first elected President, I attended a music festival at Arizona State University, in Tempe. 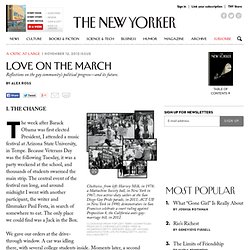 Because Veterans Day was the following Tuesday, it was a party weekend at the school, and thousands of students swarmed the main strip. The central event of the festival ran long, and around midnight I went with another participant, the writer and filmmaker Paul Festa, in search of somewhere to eat. The only place we could find was a Jack in the Box. We gave our orders at the drive-through window. A car was idling there, with several college students inside. “My parents raised me right,” the blond guy hollered at the students in the second car, who turned out to be his friends.

A beefy, sour-faced guy wearing a backward baseball cap came around the corner. Like most gay men, I have been called a faggot a few times. “How dare you?” The beefy guy wilted in the face of this semi-coherent invective. Gay men my age prided themselves on their generational difference. GFV on bullying. Bullying has been a much talked about topic these days and as a person who was bullied to an extreme, I am very glad to see this come about. 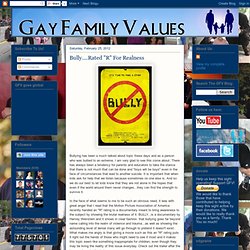 There has always been a tendency for parents and educators to take the stance that there is not much that can be done and "boys will be boys" even in the face of circumstances that lead to another suicide. It is important that when kids ask for help that we listen because sometimes no one else is. And so we do our best to let kids know that they are not alone in the hopes that even if the world around them never changes...they can find the strength to survive it. "8" - A Play about the Fight for Marriage Equality.