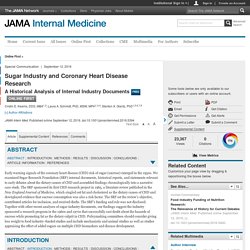 Symposium on atherosclerosis held under the auspices of the Division of Medical Sciences National Academy of Sciences–National Research Council at the request of the Human Factors Division Air Force Directorate of Research and Development. March 22-23, 1954. 1954; Accessed August 31, 2015. Taubes G. Editorial - Food Industry Funding of Nutrition Research:  The Relevance of History for Current Debates.

Industry-sponsored nutrition research, like that of research sponsored by the tobacco, chemical, and pharmaceutical industries, almost invariably produces results that confirm the benefits or lack of harm of the sponsor’s products, even when independently sponsored research comes to opposite conclusions.1 Although considerable evidence demonstrates that those industries deliberately influenced the design, results, and interpretation of the studies they paid for,2 much less is known about the influence of food-company sponsorship on nutrition research. 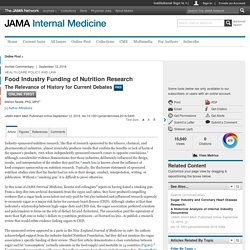 Typically, the disclosure statements of sponsored nutrition studies state that the funder had no role in their design, conduct, interpretation, writing, or publication. Without a “smoking gun” it is difficult to prove otherwise. Cristin Kearns. Cristinkearns (@sugarpolitics) Laura A. Schmidt (@LauraSchmidtPhD) Laura Schmidt. Schmidt LA, Jacobs LM, Spetz J. 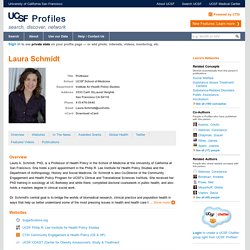 Young People's More Permissive Views About Marijuana: Local Impact of State Laws or National Trend? Am J Public Health. 2016 Aug; 106(8):1498-503. PMID: 27196657. Stanton Glantz. Children under ten being fed 14 spoons of sugar a day - research - Lifestyle. Parents are feeding under-tens an average of 14 teaspoons of sugar a day - despite years of warnings about the dangers. 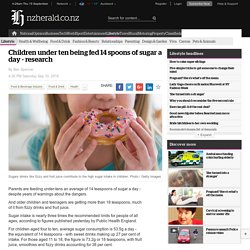 And older children and teenagers are getting more than 18 teaspoons, much of it from fizzy drinks and fruit juice. Sugar intake is nearly three times the recommended limits for people of all ages, according to figures published yesterday by Public Health England. For children aged four to ten, average sugar consumption is 53.5g a day - the equivalent of 14 teaspoons - with sweet drinks making up 27 per cent of intake.

For those aged 11 to 18, the figure is 73.2g or 18 teaspoons, with fruit juice, smoothies and fizzy drinks accounting for 38 per cent. The figures show that youngsters' consumption of sweet drinks has dropped very little in the six years health officials have been collecting data, despite dire warnings of the health dangers. NYT: How the Sugar Industry Shifted Blame to Fat. Photo The sugar industry paid scientists in the 1960s to downplay the link between sugar and heart disease and promote saturated fat as the culprit instead, newly released historical documents show.

The internal sugar industry documents, recently discovered by a researcher at the University of California, San Francisco, and published Monday in JAMA Internal Medicine, suggest that five decades of research into the role of nutrition and heart disease — including many of today’s dietary recommendations — may have been largely shaped by the sugar industry. “They were able to derail the discussion about sugar for decades,” said Stanton Glantz, a professor of medicine at U.C.S.F. and an author of the new JAMA paper. The documents show that a trade group called the Sugar Research Foundation, known today as the Sugar Association, paid three Harvard scientists the equivalent of about $50,000 in today’s dollars to publish a 1967 review of sugar, fat and heart research. Dr. CNN: How the sugar industry sweetened research in its favor.

A group then called the Sugar Research Foundation funded some of the early research on fat as the primary risk factor for heart disease, a "sophisticated" tactic to overshadow other research that placed blame on sweets as a risk factor, according to researchers. 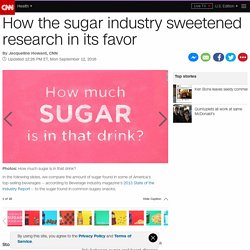 Researchers said the early heart disease research has implications for Americans' health today. "If we could rewind the script back to 1965 and we had said, 'You know what, we're not just going to worry about fat and heart disease, we're also going to look at carbohydrates and in particular sugar, because that's a concentrated form of carbohydrate,' things might be really different," said Laura Schmidt, a professor of health policy in the University of California, San Francisco's School of Medicine and a co-author of the new analysis. Sugar industry secretly paid for favorable Harvard research. S nutrition debates raged in the 1960s, prominent Harvard nutritionists published two reviews in a top medical journal downplaying the role of sugar in coronary heart disease. 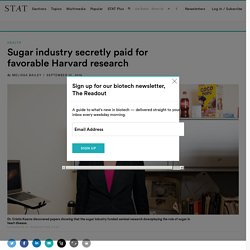 Newly unearthed documents reveal what they didn’t say: A sugar industry trade group initiated and paid for the studies, examined drafts, and laid out a clear objective to protect sugar’s reputation in the public eye. That revelation, published Monday in JAMA Internal Medicine, comes from Dr. Cristin Kearns at the University of California, San Francisco, a dentist-turned-researcher who found the sugar industry’s fingerprints while digging through boxes of letters in the basement of a Harvard library. Her paper recounts how two famous Harvard nutritionists, Dr.

What was 'Project 226'? How two esteemed #Harvard profs were paid off by #BigSugar tonight on @CBCTheNational. How Big Sugar Enlisted Harvard Scientists to Influence How We Eat—in 1965. The food industry has funded research in an effort to influence nutrition science and health policy for more than half a century, new research out Monday has found. 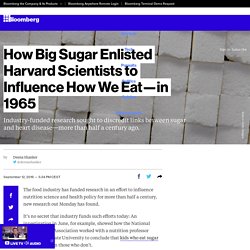 It's no secret that industry funds such efforts today: An investigation in June, for example, showed how the National Confectioners Association worked with a nutrition professor at Louisiana State University to conclude that kids who eat sugar are thinner than those who don't. An article by University of California-San Francisco researchers, published Monday in JAMA Internal Medicine, shows how far back such efforts go: In 1965, the Sugar Research Foundation, the precursor to today's Sugar Association, paid Harvard scientists to discredit a link now widely accepted among scientists—that consuming sugar can raise the risk of cardiovascular disease.

Instead, the industry and the Harvard scientists pinned the blame squarely, and only, on saturated fat. Big sugar bankrolled 1960s research pointing to fat as the biggest foe of heart health, study says. NEW YORK — The sugar industry began funding research that cast doubt on sugar’s role in heart disease — in part by pointing the finger at fat — as early as the 1960s, according to an analysis of newly uncovered documents. 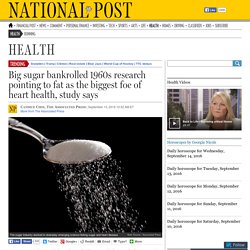 The analysis published Monday is based on correspondence between a sugar trade group and researchers at Harvard University, and is the latest example showing how food and beverage makers attempt to shape public understanding of nutrition. In 1964, the group now known as the Sugar Association internally discussed a campaign to address “negative attitudes toward sugar” after studies began emerging linking sugar with heart disease, according to documents dug up from public archives. The following year the group approved “Project 226,” which entailed paying Harvard researchers today’s equivalent of US$48,900 for an article reviewing the scientific literature, supplying materials they wanted reviewed, and receiving drafts of the article.

New report: How the sugar industry high-jacked the science of what causes heart disease - Healthy Food America. Researchers have unearthed long-buried documents that shed light on how, starting in the 1960s, the sugar industry co-opted nutrition science to shift blame for heart disease away from sugar to an exclusive focus on fat and cholesterol, according to a report published today in JAMA Internal Medicine. 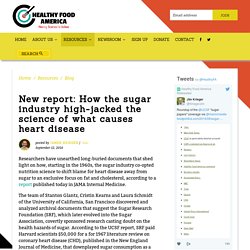 The team of Stanton Glantz, Cristin Kearns and Laura Schmidt of the University of California, San Francisco discovered and analyzed archival documents that suggest the Sugar Research Foundation (SRF), which later evolved into the Sugar Association, covertly sponsored research casting doubt on the health hazards of sugar. According to the UCSF report, SRF paid Harvard scientists $50,000 for a for 1967 literature review on coronary heart disease (CHD), published in the New England Journal of Medicine, that downplayed sugar consumption as a risk factor. Study details sugar industry attempt to shape science. Candice Choi, The Associated Press Published Monday, September 12, 2016 1:01PM EDT Last Updated Tuesday, September 13, 2016 9:53PM EDT NEW YORK -- The sugar industry began funding research that cast doubt on sugar's role in heart disease -- in part by pointing the finger at fat -- as early as the 1960s, according to an analysis of newly uncovered documents. The analysis published Monday is based on correspondence between a sugar trade group and researchers at Harvard University, and is the latest example showing how food and beverage makers attempt to shape public understanding of nutrition.

In 1964, the group now known as the Sugar Association internally discussed a campaign to address "negative attitudes toward sugar" after studies began emerging linking sugar with heart disease, according to documents dug up from public archives. The sugar industry's funding and role were not disclosed when the article was published by the New England Journal of Medicine. Sugar industry secretly paid for favorable Harvard research. Sugar Industry Tried to Bias Heart Research, Study Says.

The sugar industry may have attempted to bias heart disease research in self-serving ways, downplaying studies that implicated sugar consumption in heart disease, and instead placing the blame on fats, a new study said. In the study, researchers looked at correspondence that happened between the leaders of a sugar trade organization and heart disease researchers. The investigators also looked at internal sugar-industry documents and other materials. The study focused on the circumstances surrounding the publication of a 1967 review article about the influences of dietary sugar and fat on coronary heart disease (CHD), which is caused by the narrowing of the arteries supplying blood to the heart.

The Sugar Association, the trade organization in question, did not respond to requests for comment from Live Science. In 1964, John Hickson, who was then the vice president and director of research for the SRF, mentioned Yudkin's research in an internal memo. Both Saturated Fat and Sugar Promote Heart Disease, Despite Industry Lobbying. These findings by researchers at the University of California at San Francisco (UCSF) provide one more reason why scientific journals should disclose all potential conflicts of interest. In May, the Center for Science in the Public Interest, along with 62 scientists and six organizations, called for competing interests to be disclosed in abstracts on PubMed, the federal database of abstracts from medical and life science journals.

At the same time, the public should not misinterpret the UCSF findings. They do not undermine current advice from major health authorities to replace saturated fats with polyunsaturated fats. Those authorities—including the American Heart Association and American College of Cardiology, in partnership with the National Heart, Lung, and Blood Institute, along with the 2015 Dietary Guidelines Advisory Committee—based their advice on strong, consistent evidence published long after the mid-1960s. Sweet and sordid: How the sugar industry gamed vital research. For half a century, according to an expose published in JAMA Internal Medicine, research that would incriminate sugar as a major factor in coronary heart disease was “debunked” by researchers who were paid to ignore the science in the name of profit.

The sugar industry’s internal documents show how corporate influence-peddling led to the obesity epidemic of today. It began when the Sugar Research Foundation, now known as the Sugar Association, co-opted three Harvard scientists who, in turn, published a 1967 study in The New England Journal of Medicine that exonerated sugar but implicated saturated fat as the biggest offender in the standard American diet. It was such an influential study that a decade later, it was used by the U.S. Jouw dieet is mogelijk mede misleid door Harvard. NOS op 3 on Twitter: "Jouw dieet is mogelijk mede misleid door Harvard. NotPICNIC on Twitter: "example of @Harvard Inc. treat. Univ Inc. as overarching #maagdenhuis paradigm ? #BigSugar.