Magna Carta, Petition of Right, History of Civil Liberties : United for Human Rights. The Magna Carta (1215) Magna Carta, or “Great Charter,” signed by the King of England in 1215, was a turning point in human rights. 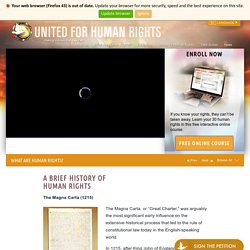 The Magna Carta, or “Great Charter,” was arguably the most significant early influence on the extensive historical process that led to the rule of constitutional law today in the English-speaking world. In 1215, after King John of England violated a number of ancient laws and customs by which England had been governed, his subjects forced him to sign the Magna Carta, which enumerates what later came to be thought of as human rights. Is man’s fate pre-destined or does he have freedom of will? - Islam Question & Answer.

Ways to Build Self-Esteem - ProductiveMuslim.com. Self-Esteem is the value that we give ourselves and the opinion we have of ourselves. 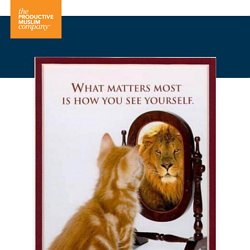 Allah (Subhanahu wa Ta’ala) blessed us with an all-encompassing way of life called Islam over 1400 years ago, and it advocates the rights of all creation (men, women, elderly, children, animals, and our own ‘self’). Levels of Self-Esteem Self-esteem issues arise on two levels. The Personal Level: On a personal level, low self-esteem could actually drive a Muslim over the edge and directly into the fire of Hell! The Social Level The social jungle has beastly menaces as well that intimidate a person and if he doesn’t bring his ‘spiritual defense’ with him, then he is bound to suffer feelings of worthlessness. Steps to Developing Self-Esteem Self-esteem does not just appear out of nowhere; it takes conscious determination, spiritual connection with Allah (Subhanahu wa Ta’ala), and emotional balance.

. #1 – Personal Evaluation Perform a personal ‘Strengths’ and ‘Weaknesses’ analysis. . #4 – Personal Grooming. Revelation 2:9 KJV - I know thy works, and tribulation, and. When is it permissible for a woman to uncover her face? Predestination in Islam. Definition[edit] In Islam, "predestination" is the usual English language rendering of a belief that Muslims call al-qaḍāʾ wa l-qadar ([ælqɑˈdˤɑːʔ wælˈqɑdɑr] القضاء والقدر). 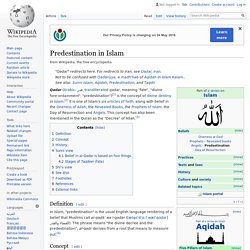 The phrase means "the divine decree and the predestination"; al-qadr derives from a root that means to measure out.[4] Concept[edit] "They will cry out to them: Were we not with you? They shall say: Yes! According to the Quran, certain people go to hell because they chose to do bad deeds, and others to heaven by doing good deeds; even if Allah had chosen to guide them to the truth, they themselves would choose to reject the faith: "And if Allah had known any good in them He would have made them hear, and if He makes them hear they would turn back while they withdraw "Nor would thy Lord be the One to destroy communities for a single wrong-doing, if its members were likely to mend.

A hadith reports that Muhammad said about Qadr: History[edit] Iman. Iman, Imaan, Eman, or Imman may refer to: Islam[edit] Places[edit] Iman, Iran, a village in Kalashi District, Kermanshah ProvinceThe Iman River, the former name of the Bolshaya Ussurka River, a tributary of the Ussuri River in Russia's Primorsky KraiIman, the former name of Dalnerechensk, a city in Russia's Primorsky Krai People[edit] Other uses[edit] 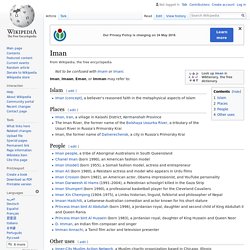 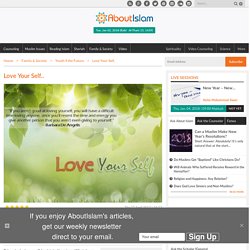 Look into the mirror. What do you see? What do you see on the outside? By the word ‘outside’, I do not mean your physical looks. Not your skin colour or the shape of your eyes. “We have certainly created man in the best of stature.” Rather, by this word, what I mean to ask you is, do you look like a happy person, full of energy and radiating a glow of happiness and love? What do you see when you look into your own eyes in that mirror? Observe yourself truthfully and carefully, and answer these questions to yourself.

Names of Men's Arabic Clothing. Updated February 27, 2017 Most people are familiar with the image of a Muslim woman and her distinctive dress. 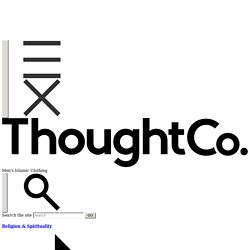 Fewer people know that Muslim men must also follow a modest dress code. Muslim men often wear traditional clothing which varies from country to country but fulfills the requirements of modesty in Islamic dress. Here is a glossary of the most common names of Islamic clothing for men, along with photos and descriptions. A long robe worn by Muslim men. A square or rectangular headscarf worn by men, along with a rope band (usually black) to fasten it in place. Love Your Self.. Samina farooq - IslamiCity. Welcome to the New IslamiCity We prepared this quick tour to help you get familiar with the new design so you find your way around the new site much quicker. 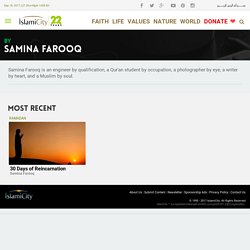 Let's begin. Topics Menu - Always one click away Topics menu will always be here, always within reach. Here, you will find quick shortcuts to major topics & hubs under IslamiCity. Site Search & Most Popular Site search is also one click away. About Us - altM. The Mind (part 1 of 2) - The Religion of Islam. Mind and reason are an essential part of Islamic thought and legislation. 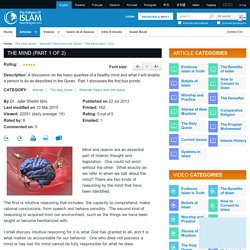 One could not exist without the other. What exactly do we refer to when we talk about the mind? There are two kinds of reasoning by the mind that have been identified. The first is intuitive reasoning that includes: the capacity to comprehend, make rational conclusions, form speech and behave sensibly. Men's Traditional Oversized Wool Blend Shawl me434 - Sincerity in quran. Sincerity in intention. Sincerity has been interpreted as being upright, sincere, truthful, pure, distant from show and ostentation in one's intention and conduct, and being closed to the things that cloud or foul one's heart. 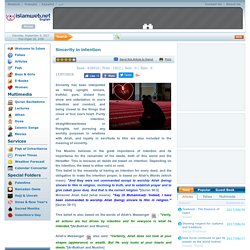