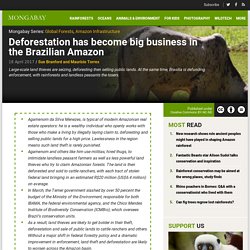 You can also read Mongabay’s series on the Tapajós Basin in Portuguese at The Intercept Brasil) The Tapajós River Basin lies at the heart of the Amazon, and at the heart of an exploding controversy: whether to build 40+ large dams, a railway, and highways, turning the Basin into a vast industrialized commodities export corridor; or to curb this development impulse and conserve one of the most biologically and culturally rich regions on the planet.

Those struggling to shape the Basin’s fate hold conflicting opinions, but because the Tapajós is an isolated region, few of these views get aired in the media. Journalist Sue Branford and social scientist Mauricio Torres travelled there recently for Mongabay, and over coming weeks hope to shed some light on the heated debate that will shape the future of the Amazon. This is the thirteenth of their reports. 6 façons de lutter contre la déforestation sans bouger de chez soi. The replanting of burned peatlands in the BAP concession has gone undetected by the BRG. L'Europe échoue à lutter contre le trafic illégal de bois - Page 2. Indonesia’s huge fires might be the worst climate change crisis on Earth right now. This story was originally published by Mother Jones and is reproduced here as part of the Climate Desk collaboration. 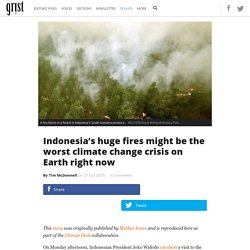 On Monday afternoon, Indonesian President Joko Widodo cut short a visit to the United States and headed home to oversee efforts to extinguish a rash of epic wildfires that have engulfed his country. Joko was in Washington, D.C., for a photo op with President Barack Obama, to talk about climate change, and to promote Indonesia as a choice venue for foreign investors. His trip was also supposed to include a stopover in San Francisco for meetings with tech industry executives. But Joko’s decision to return to Indonesia early underscores the challenges his country faces in stopping the worst deforestation on Earth — deforestation that is playing a critical role in global climate change. There’s more to global warming than pollution from cars and power plants. But on a global scale, land use is a source of greenhouse gas emissions, rather than a sink. Indonesia’s climate test. La sécheresse de Sao Paulo sonne l'alarme pour la planète - 28/11/2014 - ladepeche.fr. 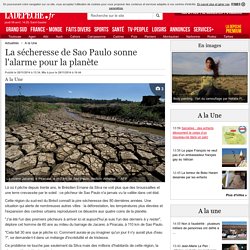 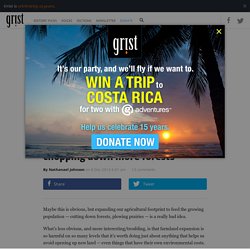 What’s less obvious, and more interesting/troubling, is that farmland expansion is so harmful on so many levels that it’s worth doing just about anything that helps us avoid opening up new land — even things that have their own environmental costs. I’ve been reading back through the papers of David Tilman, an ecologist at the University of Minnesota, from the last 15 years, exploring the effect of farming on the natural world. (I should mention that these are also the papers of his many deserving coauthors, who I can’t easily credit here.) 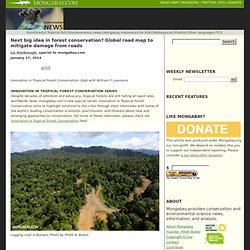 Laurance Logging road in Borneo. Photo by Rhett A. Butler. Drying Amazon threatens to increase carbon emissions. Drought in the Amazon increases the release of carbon into the atmosphere, according to research published today in Nature. 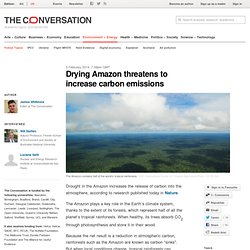 The Amazon plays a key role in the Earth’s climate system, thanks to the extent of its forests, which represent half of all the planet’s tropical rainforests. When healthy, its trees absorb CO2 through photosynthesis and store it in their wood. Because the net result is a reduction in atmospheric carbon, rainforests such as the Amazon are known as carbon “sinks”. But when local conditions change, tropical rainforests can become a source of carbon. The new study compared the carbon balance in the Amazon between 2010 and 2011. 2010 was an exceptionally dry year in the region, whereas 2011 was particularly wet. Send a message to Kelloggs' CEO. « On peut nourrir 10 milliards d’humains en bio sans défricher un hectare » Chaussures en cuir made in déforestation. Norway, UK, US allocate $280 million to stop deforestation. The governments of Norway, Britain and the United States on Wednesday said they will allocate $280 million of their multi-billion dollar climate change finances to a new initiative aimed at halting deforestation. 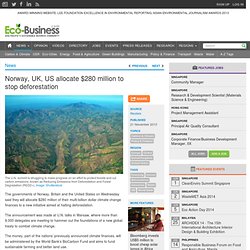 The announcement was made at U.N. talks in Warsaw, where more than 9,000 delegates are meeting to hammer out the foundations of a new global treaty to combat climate change. The money, part of the nations’ previously announced climate finances, will be administered by the World Bank’s BioCarbon Fund and aims to fund sustainable farming and better land use. Agriculture drives around 80 percent of the planet’s deforestation, causing nearly a fifth of global greenhouse gas emissions as forest roughly the size of Costa Rica is chopped down worldwide each year. 3.5 million ha of Indonesian and Malaysian forest converted for palm oil in 20 years.

Palm plantations expanding at 7% per year across Malaysia and Indonesia Oil palm plantation area and forested area (ha) in Peninsular Malaysia, 1975-2009 Some 3.5 million hectares (8.7 million acres) of forest in Indonesia, Malaysia, and Papua New Guinea was converted for oil palm plantations between 1990 and 2010, finds a comprehensive set of assessments released by the Roundtable on Sustainable Palm Oil (RSPO). 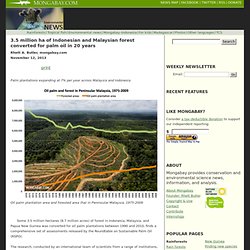 The research, conducted by an international team of scientists from a range of institutions, is presented in a series of seven academic papers that estimate change in land use and greenhouse gas emissions from oil palm expansion in the three countries, review the social and environmental impacts of palm oil production, forecast potential growth in the sector across the region, and detail methods for measuring emissions and carbon stocks of plantations establishing on peatlands.

Most of the forest area that was converted consisted of disturbed natural lowland forest. Why is Amazon deforestation climbing? The 28 percent increase in deforestation in the Brazilian Amazon over last year that was reported this week is bad news, but it is not surprising. 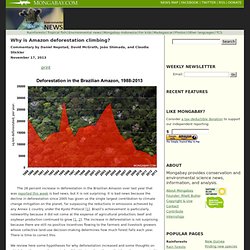 It is bad news because the decline in deforestation since 2005 has given us the single largest contribution to climate change mitigation on the planet, far surpassing the reductions in emissions achieved by any Annex 1 country under the Kyoto Protocol [1]. Brazil’s achievement is particularly noteworthy because it did not come at the expense of agricultural production; beef and soybean production continued to grow [1, 2].

The increase in deforestation is not surprising because there are still no positive incentives flowing to the farmers and livestock growers whose collective land-use decision-making determines how much forest falls each year. There is time to correct this. ALLONS-NOUS LAISSER DÉTRUIRE CES TRÉSORS D'AMAZONIE ? "Biocarburants": l'UE détruit 700.000 ha de forêt. Deforestation in the Brazilian Amazon pacing 88% higher than last year's rate. Satellite analysis by a Brazil-based NGO indicates that deforestation in the Brazilian Amazon continues to pace well ahead of last year, when the government passed a weakened version of its law governing use of forest lands. 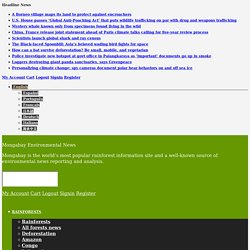 Imazon’s near-real-time deforestation tracking system — known as SAD — detected 1,570 square kilometers of accumulated forest loss between August 2012 and April 2013, an 88 percent increase over the 836 sq km cleared during the year earlier period. However accumulated forest degradation was down by nearly a quarter, according to the system. Brazil has the world’s weirdest carbon footprint - Quartz. Unlike just about every other developing country’s carbon print, Brazil’s greenhouse gas emissions are falling—fast.

That’s according to an independent study (link in Portuguese) carried out by over 30 non-government organizations focused on climate change, including the World Wildlife Fund and Greenpeace. Brazil’s emissions for 2012 dropped 5% from a year earlier, and registered as the country’s lowest in 20 years, according to Observatorio do Clima, the network of NGOs that carried out the study. The latest decline caps a steady decline since the country’s emissions hit a near peak in 2004. EcoInternet : Earth is dying... ESSAY: What Would John Muir Say... About the Sierra Club. About the Sierra Club being led by Michael Brune, Accountant-in-Chief, and old-growth forest logging apologist?

Une compagnie minière compte détruire 1,6 million d'hectares de forêts en Indonésie. Paper Giant Pledges to Leave the Poor Rainforest Alone. Finally. If you've ever bought toilet paper, a bucket of KFC chicken, or photocopy paper, there's a decent chance that it came from Asia Pulp & Paper, the third largest paper producer in the world. There's also a chance that that paper was made from the quickly disappearing Indonesian rainforest—which is why activists and environmental organizations have long labeled Asia Pulp & Paper a "forest criminal" for destroying this precious habitat.