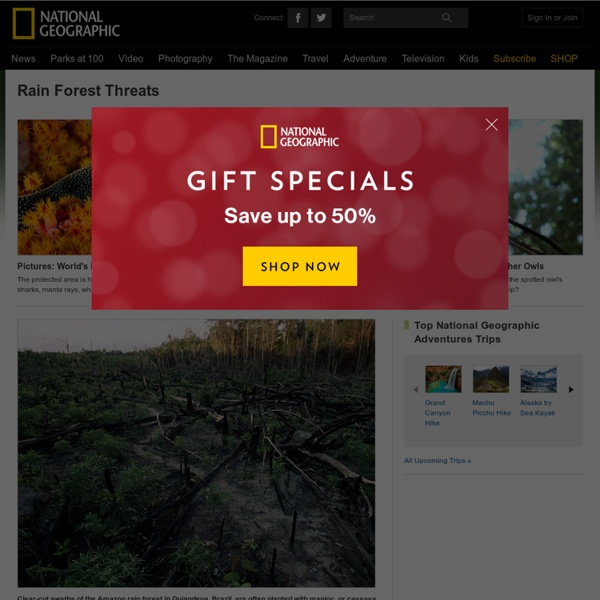 More than half of Earth’s rain forests have already been lost forever to the insatiable human demand for wood and arable land. Rain forests that once grew over 14 percent of the land on Earth now cover only about 6 percent. And if current deforestation rates continue, these critical habitats could disappear from the planet completely within the next hundred years. The reasons for plundering rain forests are mainly economic. Wealthy nations drive demand for tropical timber, and cash-strapped governments often grant logging concessions at a fraction of the land’s true value. Threats Solutions Related:  Deforestation 2017 • Rainforests

Deforestation - Wikipedia Conversion of forest to non-forest for human use Deforestation has many causes: trees can be cut down to be used for building or sold as fuel (sometimes in the form of charcoal or timber), while cleared land can be used as pasture for livestock and plantation. Disregard of ascribed value, lax forest management, and deficient environmental laws are some of the factors that lead to large-scale deforestation. In many countries, deforestation—both naturally occurring and human-induced—is an ongoing issue.[5] Between 2000 and 2012, 2.3 million square kilometres (890,000 sq mi) of forests around the world were cut down.[6] As of 2005, net deforestation rates had ceased to increase in countries with a per capita GDP of at least US$4,600.[7][8] The removal of trees without sufficient reforestation has resulted in habitat damage, biodiversity loss, and aridity. Deforestation is more extreme in tropical and subtropical forests in emerging economies. Causes Environmental effects Atmospheric Soil Notes

News: Rain Forest For centuries, humans have relied on rain forests for a variety of products. Foods such as tomatoes, peppers, corn, rice, coconuts, bananas, coffee, cocoa, tapioca, beans, and sweet potatoes all originally came from the rain forest. Many civilizations have exploited the timber in rain forests and cleared the land for farms. Some preliterate tribes have actually lived in the rain forests for thousands of years. Today people rely on tropical rain forests for a variety of everyday products: paper (7 percent of all paper pulp comes from the rain forest); rubber (used in tires and other products); wax (used in plastics); mahogany and teak (used in wood products such as furniture); and many other items. Destructive Activities Unfortunately, human activities have taken a toll on the rain forest. Farming. Cattle ranching also poses a danger to rain forests. Logging. Other activities. Destruction Aftermath Soil and erosion. Flora and fauna. Climate. Copyright © 2002 Grolier Incorporated.

BBC Nature - Rainforest videos, news and facts Deforestation: Facts, Causes & Effects Deforestation is the permanent destruction of forests in order to make the land available for other uses. An estimated 18 million acres (7.3 million hectares) of forest, which is roughly the size of the country of Panama, are lost each year, according to the United Nations' Food and Agriculture Organization (FAO). Some other statistics: About half of the world's tropical forests have been cleared (FAO) Forests currently cover about 30 percent of the world’s land mass (National Geographic) Forest loss contributes between 6 percent and 12 percent of annual global carbon dioxide emissions (Nature Geoscience) About 36 football fields worth of trees lost every minute (World Wildlife Fund (WWF)) Deforestation occurs around the world, though tropical rainforests are particularly targeted. NASA predicts that if current deforestation levels proceed, the world's rainforests may be completely in as little as 100 years. Error loading player: No playable sources found Weather vs.

Deforestation | Threats Forests cover 31% of the land area on our planet. They produce vital oxygen and provide homes for people and wildlife. Many of the world’s most threatened and endangered animals live in forests, and 1.6 billion people rely on benefits forests offer, including food, fresh water, clothing, traditional medicine and shelter. But forests around the world are under threat from deforestation, jeopardizing these benefits. Forests play a critical role in mitigating climate change because they act as a carbon sink—soaking up carbon dioxide that would otherwise be free in the atmosphere and contribute to ongoing changes in climate patterns. Deforestation is a particular concern in tropical rainforests because these forests are home to much of the world’s biodiversity. WWF has been working to protect forests for more than 50 years.

Rain Forest In Brazil, which houses 30 percent of the remaining tropical rain forest on Earth, more than 50,000 square miles of rain forest were lost to deforestation between 2000 and 2005. Biologists worry about the long-term consequences. Drought may be one. Some rain forests, including the Amazon, began experiencing drought in the 1990s, possibly due to deforestation and global warming. Efforts to discourage deforestation, mainly through sustainable-logging initiatives, are underway on a very limited basis but have had a negligible impact so far. The rain forest is nearly self-watering. Plants in the rain forest grow very close together and contend with the constant threat of insect predators. The National Cancer Institute (NCI) estimates that 70 percent of the anti-cancer plants identified so far are rain forest plants. Many trees and plants, like orchids, have been removed from the rain forest and cultivated.

CBBC Newsround: Amazon deforestation Some main reasons why areas of rainforests are cut down:Farming e.g. soya fields, cattle ranches Mining Flooding areas of land as part of hydro electric power stations Logging to sell the timber Once the trees go, the soil becomes infertile in one or two years, making it poor for farming. Hunting becomes more difficult for the people who live there as the habitat for wildlife is lost. Traditional people's cultures are also lost. The effects of deforestation: Trees are removed. Trees do not protect soil so nutrients are washed out by the rain. Soil is now less fertile and the unprotected surface becomes dry and compacted. It is hard for rain to soak into the soil, so flooding may occur. New trees grow more slowly and there are less species. Possible alternatives to deforestation: You may think that the obvious solution to the problems of deforestation is simply to stop people cutting the trees down. However, it's not always as straightforward as that. The global effects of deforestation:

Why people do slash and burn Deforestation Facts for Kids - The World Counts TheWorldCounts, 22 July, 2014 When you see paper and wood, what do you think of? Do you think of the tree that was felled to make the product? Before we started to build cities many centuries ago, they say that 60% of the Earth was covered in Forests. Now, there is less than 10% left. Deforestation is when forests are converted for other purposes by cutting down the trees to clear the land for other use. What you need to know about Deforestation Can you imagine Earth without forests? 13 million hectares of forest have been cleared for other uses or by natural disaster. More facts: Rainforests cover only 6% of the world’s surface… yet they are home to more than 50% of the plant and animal species on Earth.A patch of rainforest measuring 4 square miles can contain as many as 1,500 flowering plants, 400 species of birds, 750 species of trees and 150 species of butterflies. Why are Rainforests Important? Rainforests help regulate the Earth’s temperature and weather patterns. Reduce. References

Rainforest Coloring Pages and Activities for Kids Color in your favorite rainforest birds, mammals, reptiles and plants in our coloring book, or teach yourself about the rainforest with our fun experiments, crafts, and quizzes. Coloring Pages: Amphibians Birds Insects Mammals Plants Reptiles Hands-On Projects from The Remarkable Rainforest Teach yourself about the rainforest with experiments, crafts, and quizzes. These activities are reprinted from The Remarkable Rainforest by Toni Albert, © 1994 by Toni Albert. If you order this book directly from the publishers at 800-353-2791, mention the Rainforest Alliance.

Wildlife Trade Our work Display of illegal wildlife products used in Chinese medicine confiscated by customs officers at Heathrow Airport, UK. © WWF-Canon/Edward PARKERWildlife trade is any sale or exchange of wild animal and plant resources by people. This can involve live animals and plants or a diverse range of products needed or prized by humans—including skins, medicinal ingredients, tourist curios, timber, fish and other food products. Most wildlife trade is probably within national borders, but there is a large volume of wildlife in trade internationally. Why There are many reasons why wildlife is traded, including: food—fruits, mushrooms, nuts, leaves and tubers, are particular important resources in sustaining livelihoods in many rural areas. The primary motivating factor for wildlife traders is economic, ranging from small scale local income generation to major profit-oriented business, such as marine fisheries and logging companies. Over-exploitation is a major concern:

Deforestation | Threats Forests cover 31% of the land area on our planet. They produce vital oxygen and provide homes for people and wildlife. Many of the world’s most threatened and endangered animals live in forests, and 1.6 billion people rely on benefits forests offer, including food, fresh water, clothing, traditional medicine and shelter. But forests around the world are under threat from deforestation, jeopardizing these benefits. Deforestation comes in many forms, including fires, clear-cutting for agriculture, ranching and development, unsustainable logging for timber, and degradation due to climate change. Forests play a critical role in mitigating climate change because they act as a carbon sink—soaking up carbon dioxide that would otherwise be free in the atmosphere and contribute to ongoing changes in climate patterns. Deforestation is a particular concern in tropical rainforests because these forests are home to much of the world’s biodiversity.