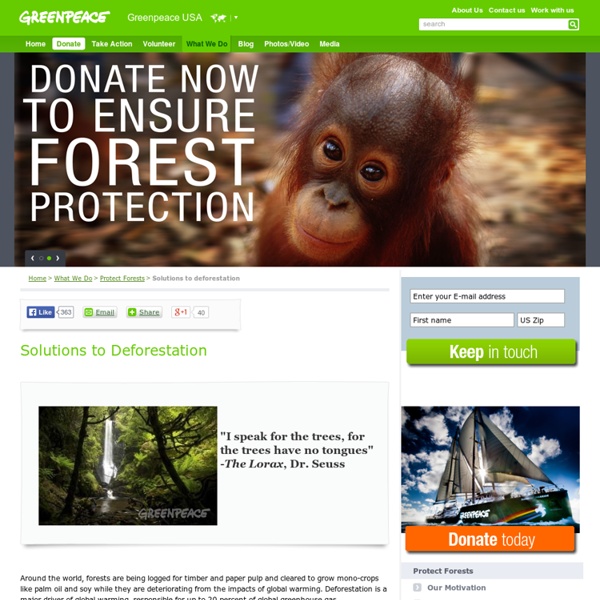 "I speak for the trees, for the trees have no tongues" -The Lorax, Dr. Seuss Around the world, forests are being logged for timber and paper pulp and cleared to grow mono-crops like palm oil and soy while they are deteriorating from the impacts of global warming. Deforestation is a major driver of global warming, responsible for up to 20 percent of global greenhouse gas emissions–more than all the cars, trucks, planes, boats and trains in the world combined. Deforestation doesn’t just threaten our climate, it threatens the livelihoods of 1.6 billion people that rely on forests for food and economic activity. Ending deforestation and protecting forests will not only preserve biodiversity and defend the rights of forest communities, it is also one of the quickest and cost effective ways of curbing global warming. Drivers of deforestation vary from region to region-below are examples of human activity driving the destruction of the world’s natural forests. 1. 2. 3. Wield your consumer power!

Our Sustainable Planet » Wildlife • The ocean is immense but not a reservoir of unlimited life, and it is concentrated in coastal zones teeming with diversity. These coastal zones are subject to commercial exploitation, the polluting refuse of our rivers and rising sea levels from melting glaciers due to global warming. • The coastal zones are the source of 80% of marine species and these wetlands and mangrove forests are being destroyed at an alarming rate through violent storms, erosion from human encroachment and agricultural expansion, pollution and global warming. • Coral reefs are reservoirs of biodiversity with 4,000 species of fish and they are rapidly disappearing. 70% of the coral on the earth is threatened by global warming, pollution and human activity. Most coral lies in shallow water that is easily warmed by rising temperatures from global warming. • The ocean floor is becoming littered with debris (plastic, non-biodegradable materials), which drowns birds, turtles and seals who ingest the material.

Ethiopia: Deforestation and monoculture plantations behind the fires Ethiopia: Deforestation and monoculture plantations behind the fires A mountainous tropical country with altitudes of over 4,000 metres, Ethiopia has many regions which were once rich in vegetation and are now rocky, desert areas. Desertification and erosion have further increased within the past decade. Almost all the forests in Ethiopia have been destroyed in the last 40 years, according to a study by the United Nations. Less than 3% of the entire country is now covered with trees, compared to the 40% of a century ago and 16% in the early 1950s, prompting fears of an impending environmental disaster in this country which is home to coffee and one of the biodiversity hotspots of the world, now with large areas exposed to heavy soil erosion. The most threatened vegetation zones of the country are not found in the wildlife designated areas; these are the moist evergreen forests and the dry evergreen forests, the most extensive and most widely used forest resources. top

The Health of the Earth & Its People The wholesale industrialized exploitation of nature for short-term gain cannot be sustained; it is a major component of what we have termed agricide. The crime of agricide is perpetrated on a variety of fronts, and it's far-reaching consequences show that the health of earth and its inhabitants cannot be separated. EROSION & DEPLETION OF RESOURCES Agricide includes escalating soil erosion; the impoverishment and poisoning of the soil; the pollution of lakes, rivers, and oceans from the runoff of topsoil contaminated with chemicals; the destruction of groundwater sources from pollution and overuse; the use of nitrogenous fertilizers that are also implicated in the destruction of the earth's ozone layer; and the development of fast growing, high yield hybrid strains of crops and animals that are more susceptible to disease. The USDA estimates that cropland erosion is occurring in the United States at a rate of two billion tons of soil a year. According to Dr. H.

Impact of Deforestation - Species Loss, Extinction and Disease By Rhett Butler | Last updated July 22, 2012 A fully functioning forest has a great capacity to regenerate. Loss of habitat in the tropics also affects the regeneration of temperate species. The emergence of tropical diseases and outbreaks of new diseases, including nasty hemorrhagic fevers like ebola and lassa fever, are a subtle but serious impact of deforestation. Many emergent and resurgent diseases are directly linked to land alterations which bring humans in closer contact with such pathogens. Malaria — which is estimated to infect 300 million people a year worldwide, killing 1-2 million — is a major threat to forest-dwelling indigenous peoples who have developed little or no (in the case of uncontacted tribes) resistance to the disease and lack access to antimalarial drugs. According to the Centers for Disease Control (CDC) in Atlanta, deaths from infectious disease are on the rise. Review questions: How is deforestation linked to the emergence of disease? Continued / Next:

Keeping Forests Standing Illegal logging. Over-harvesting. Agricultural conversion. What We’re Doing The Rainforest Alliance develops innovative and sustainable alternatives to forest destruction. Our solution? Evaluating Our Impact To make sure that we are as effective as possible, we routinely conduct and evaluate impact studies on our work and continually adjust our approach. Help us keep forests standing » Learn About How We Are Also... Haiti Soil By Joel K. Bourne, Jr. Rice makes up 20 percent of the typical Haitian’s diet, and that percentage is growing. In 1981 Haiti imported 18,000 tons of rice. Now the country imports close to 400,000 tons annually. Less than a quarter is homegrown. “Tè a fatige,” said 70 percent of Haitian farmers in a recent survey when asked about the major agricultural problems they faced. And no wonder. So what do you do if you live in the poorest nation in the Western Hemisphere, and the price of the primary carbohydrate—“Miami rice” from the U.S. But there is more at stake than simply the ability of Haitian soil to feed a starving nation. That’s as it should be, officials say. The problem, says ecologist and activist Sasha Kramer, is that these days Haitian farmers can’t sell enough mangoes to afford imported rice. Until then Haiti remains a poignant lesson in what soil scientists have preached for years: As a nation’s soil goes, so goes the nation.

Forests: Threats to our forests Deforestation Results of deforestation Forests are cleared all around the world for a number of reasons, including: Harvesting of timber to produce wood and paper products Clearing land for farms, cash-crop plantations, and cattle ranching Clearing land for urban development, including homes and roads. Forests are also being destroyed by acid rain resulting from our pollution-causing activities and through the introduction of disease and invasive species. What happens when forests are cleared? Floods and soil erosion Erosion The roots of a tree make gaps in the soil so that when it rains the water can sink in before being absorbed by the soil. Because the soil no longer can absorb the water, when it rains the water remains on the top of the soil and this can result in floods. What we lose: About 24 billion tons of agricultural topsoil (the top layer of soil) wash or blow away each year. Drought Forests help produce rainfall. Greenhouse gases and acid rain Species extinction