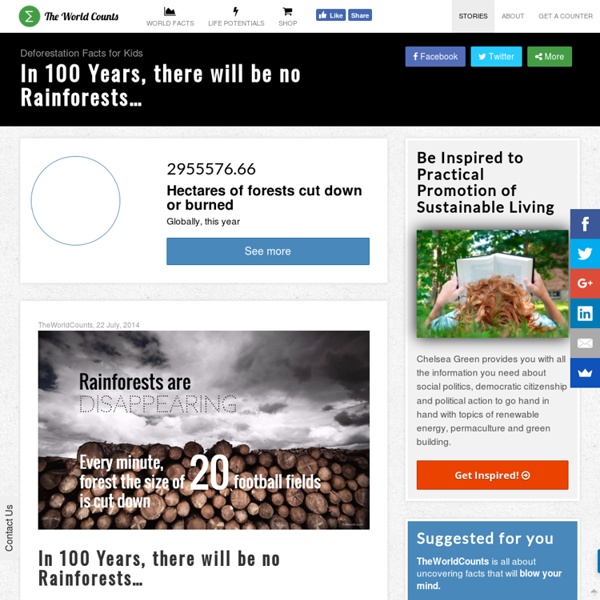 TheWorldCounts, 22 July, 2014 When you see paper and wood, what do you think of? Do you think of the tree that was felled to make the product? Before we started to build cities many centuries ago, they say that 60% of the Earth was covered in Forests. Deforestation is when forests are converted for other purposes by cutting down the trees to clear the land for other use. What you need to know about Deforestation Can you imagine Earth without forests? 13 million hectares of forest have been cleared for other uses or by natural disaster. More facts: Rainforests cover only 6% of the world’s surface… yet they are home to more than 50% of the plant and animal species on Earth.A patch of rainforest measuring 4 square miles can contain as many as 1,500 flowering plants, 400 species of birds, 750 species of trees and 150 species of butterflies. Why are Rainforests Important? Rainforests help regulate the Earth’s temperature and weather patterns. They are home to plants and animals. Reduce. Related:  Deforestation 2017 • Deforestation

Wildfires Article, Forest Fires Information, Wildland Fires Facts -- National Geographic - test Uncontrolled blazes fueled by weather, wind, and dry underbrush, wildfires can burn acres of land—and consume everything in their paths—in mere minutes. On average, more than 100,000 wildfires, also called wildland fires or forest fires, clear 4 million to 5 million acres (1.6 million to 2 million hectares) of land in the U.S. every year. In recent years, wildfires have burned up to 9 million acres (3.6 million hectares) of land. There are three conditions that need to be present in order for a wildfire to burn, which firefighters refer to as the fire triangle: fuel, oxygen, and a heat source. Although four out of five wildfires are started by people, nature is usually more than happy to help fan the flames. These violent infernos occur around the world and in most of the 50 states, but they are most common in the U.S. Firefighters fight wildfires by depriving them of one or more of the fire triangle fundamentals.

Deforestation: Where is the world losing the most trees?  The Devastating Effects of Wildlife Poaching Wildlife poaching has negative side-effects that affect local communities, wildlife populations, and the environment. It is a crime fueled by a lucrative black market trade of animal parts. The animal parts are sold as novelty items and are sold for their “medicinal” properties. Poachers kill for profit. Effects on Local Communities The United States is second to China in its desire for illegal wildlife parts. The extinction of a species can have a negative economic effect on a local community’s tourism industry. Effects on Animals Extinction is the greatest threat to animals that are victims of wildlife poaching. The Sumatran Tiger is a critically endangered species right now. Effects on the Environment Poaching is also dangerous to the environment. Our ecosystems are sensitive and must be preserved. Get Involved If you suspect poaching, use this list to contact the proper authorities. Also, arm yourself with additional information, like from the sources below, and share it wide and far!

Cheetos in crosshairs of deforestation controversy - Mar. 30, 2016 SumOfUs, an online consumer advocacy group, launched a campaign against Cheetos saying that its palm oil policy doesn't go far enough to ensure that it is deforestation-free. Palm oil has been a problematic ingredient, because it is often obtained by clearing rainforests, according to the World Wildlife Federation. That has threatened the habitats of many endangered species, including elephants, orangutans, rhinoceroses and tigers. Cheetos maker Frito-Lay, a subsidiary of PepsiCo (PEP), has committed to using sustainable palm oil that is grown on plantations -- not in rainforests. But that pledge doesn't take full effect until 2020. Yet SumOfUs has called PepsiCo's commitment "weak," criticizing Pepsi for its lack of enforcement. "PepsiCo's palm oil policy is a step in the right direction, but it doesn't really do enough to prevent deforestation," said Katherine Tu, campaign leader at SumOfUS. A spokeswoman for Pepsi denied that IndoFood was excluded from its palm oil pledge.

How to Fight Deforestation With Your Fork Can going meatless once a week change the course of our rainforests? Let’s look at what, why and how. Today, the raising of livestock uses 30 percent of the Earth’s total land surface. And every hour, rainforests the size of 4,000 football fields are being destroyed, most of it for beef production. We simply can’t afford to lose our rainforests. Simple truth: As the world population explodes and the demand for meat grows, more and more rainforest will be destroyed. Why? Peggy Neu, president of the Monday campaigns, reminds us that Meatless Monday has its roots in World War I and II, when Americans were asked to help conserve key staples to aid the war effort. Join with all of us on Meatless Monday and watch our food choices change the future. Activists Scale NYC Landmark, Drop Banner: Pepsi Cola, Cut Conflict Palm Oil Can Superfoods Help Boost the Planet’s Health, Too? The Role of the Worm in Recycling Wastewater Watch Racing Extinction: It Will Change the Way You View the World

Deforestation | Threats Forests cover 31% of the land area on our planet. They produce vital oxygen and provide homes for people and wildlife. Many of the world’s most threatened and endangered animals live in forests, and 1.6 billion people rely on benefits forests offer, including food, fresh water, clothing, traditional medicine and shelter. But forests around the world are under threat from deforestation, jeopardizing these benefits. Deforestation comes in many forms, including fires, clear-cutting for agriculture, ranching and development, unsustainable logging for timber, and degradation due to climate change. This impacts people’s livelihoods and threatens a wide range of plant and animal species. Forests play a critical role in mitigating climate change because they act as a carbon sink—soaking up carbon dioxide that would otherwise be free in the atmosphere and contribute to ongoing changes in climate patterns. WWF has been working to protect forests for more than 50 years.

Deforestation Facts, Deforestation Information, Effects of Deforestation Modern-Day Plague Deforestation is clearing Earth's forests on a massive scale, often resulting in damage to the quality of the land. Forests still cover about 30 percent of the world’s land area, but swaths the size of Panama are lost each and every year. The world’s rain forests could completely vanish in a hundred years at the current rate of deforestation. Forests are cut down for many reasons, but most of them are related to money or to people’s need to provide for their families.The biggest driver of deforestation is agriculture. Logging operations, which provide the world’s wood and paper products, also cut countless trees each year. Not all deforestation is intentional. Deforestation has many negative effects on the environment. Deforestation also drives climate change. Removing trees deprives the forest of portions of its canopy, which blocks the sun’s rays during the day and holds in heat at night.

Deforestation - Wikipedia Conversion of forest to non-forest for human use Deforestation has many causes: trees can be cut down to be used for building or sold as fuel (sometimes in the form of charcoal or timber), while cleared land can be used as pasture for livestock and plantation. Disregard of ascribed value, lax forest management, and deficient environmental laws are some of the factors that lead to large-scale deforestation. The removal of trees without sufficient reforestation has resulted in habitat damage, biodiversity loss, and aridity. Deforestation is more extreme in tropical and subtropical forests in emerging economies. Causes According to the United Nations Framework Convention on Climate Change (UNFCCC) secretariat, the overwhelming direct cause of deforestation is agriculture. Another cause of deforestation is climate change. 23% of tree cover losses result from wildfires and climate change increase their frequency and power[27]. Deforestation in the Maranhão state of Brazil, 2016 Atmospheric Soil

From Forest to Field: How Fire is Transforming the Amazon : Feature Articles They pored over satellite images from the Landsat satellite captured between 1993 and 1995 to see what happened to all the area that was “deforested” in 1992. They decided that cleared areas with nice, straight lines that had sprung up next to pre-existing forest edges were probably intentional clearings for pasture or farmland. But Cochrane and his colleagues also discovered that much of the area labeled as deforested in 1992 was far from forest edges, was irregular in shape, and was already beginning to regrow. These areas, it seemed clear, were probably not the result of intentional deforestation. Instead, the scientists concluded, these tracts of forest had been “impoverished” by accidental fire. This distinction between accidental and intentional is important, explains Nepstad, because “it suggests that much of the impoverishment of the Amazon may have nothing to do with people’s plans for the land.”

Solutions to Deforestation The causes of deforestation and degradation vary from region to region. In the tropics, agribusiness clears forests to make space for things like cattle ranching, palm oil and soy plantations for animal feed. Demand for wood products can threaten forests around the world, whether it is for throw-away paper products or hardwood flooring. In too many parts of the world, ineffective or corrupt governments make things worse by opening the door to illegal logging and other crimes. Read more about the drivers of deforestation. Solving Deforestation Deforestation and degradation are a complex problems. The Power of the Marketplace If corporations have the power to destroy the world’s forests, they also have the ability to help save them. Companies can make an impact by introducing “zero deforestation” policies that clean up their supply chains. Companies should set ambitious targets to maximize the use of recycled wood, pulp, paper and fiber in their products. Standing with Indigenous Peoples

Deforestation "Here goes lumber from the Maine woods ... pine, spruce, cedar, - first, second, third, and fourth qualities, so lately all of one quality, to wave over the bear, and moose, and caribou..." - Henry David Thoreau, 1845. 1. Introduction It is impossible to overstate the importance of humankind's clearing of the forests. Just think, originally, almost half of the United States, three-quarters of Canada, almost all of Europe, the plains of the Levant, and much of the rest of the world were forested. Rain Forest Threats, Rain Forest Species More than half of Earth’s rain forests have already been lost forever to the insatiable human demand for wood and arable land. Rain forests that once grew over 14 percent of the land on Earth now cover only about 6 percent. And if current deforestation rates continue, these critical habitats could disappear from the planet completely within the next hundred years. The reasons for plundering rain forests are mainly economic. Threats Solutions