Coronavirus: The seven types of people who start and spread viral misinformation. Media playback is unsupported on your device Conspiracy theories, misinformation and speculation about coronavirus have flooded social media. 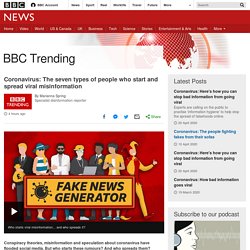 But who starts these rumours? And who spreads them? We've investigated hundreds of misleading stories during the pandemic. It's given us an an idea about who is behind misinformation - and what motivates them. You'd hope no-one was fooled by a WhatsApp voice note claiming the government was cooking a giant lasagne in Wembley stadium to feed Londoners. To take a slightly more serious example, a prankster created a screenshot of a fake government text that claimed the recipient had been fined for leaving the house too many times.

After encouraging his followers to share it on Instagram, it found its way to local Facebook groups, where it was posted by worried residents, some of whom took it seriously. "I don't really want to cause panic," says the prankster, who wouldn't give us his real name. Photos of the scam text were shared on Facebook. MediaWise. Fake news and critical thinking in information evaluation. Georgiadou, Elli, Rahanu, Harjinder, Siakas, Kerstin V., McGuinness, Claire, Edwards, J. 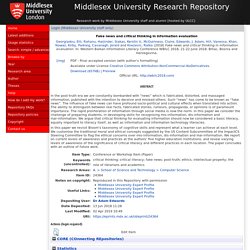 Adam, Hill, Vanessa, Khan, Nawaz, Kirby, Padraig, Cavanagh, Jerald and Knezevic, Ratko (2018) Fake news and critical thinking in information evaluation. In: Western Balkan Information Literacy Conference WBILC 2018, 21-22 June 2018, Bihac, Bosnia and Herzegovina. In the post-truth era we are constantly bombarded with “news” which is fabricated, distorted, and massaged information, published with the intention to deceive and mislead others. Such “news” has come to be known as “fake news”. The influence of fake news can have profound socio-political and cultural effects when translated into action.

In this paper we revisit Bloom’s taxonomy of cognitive skills and represent what a learner can achieve at each level. Fake news. Media Literacy versus Fake News: a Bournemouth University Workshop. Dr Jane Secker, Chair of the CILIP Information Literacy Group, has kindly provided an excellent report on a recent Bournemouth University workshop in relation to fake news and critical thinking. 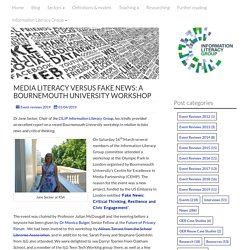 On Saturday 16th March several members of the Information Literacy Group committee attended a workshop at the Olympic Park in London organised by Bournemouth University’s Centre for Excellence in Media Partnership (CEMP). The reason for the event was a new project, funded by the US Embassy in London entitled ‘Fake News: Critical Thinking, Resilience and Civic Engagement’.

The event was chaired by Professor Julian McDougall and the evening before a keynote has been given by Dr Monica Bulger, Senior Fellow at the Future of Privacy Forum . We had been invited to this workshop by Allison Tarrant from the School Libraries Association, and in addition to me, Sarah Pavey and Stephane Goldstein from ILG also attended. Website Evaluation - Information Literacy - Homepage at NYC DOE Office of Library Services. The Fake News Generator. The Framley Examiner. Dog Island Free Forever. All About Explorers. The Legend of Jackalope – Jackalope. It’s an aggressive species, willing to use its antlers to fight. 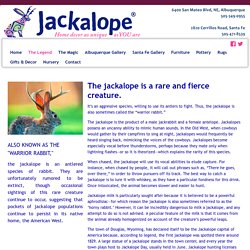 Thus, the jackalope is also sometimes called the “warrior rabbit.” The jackalope is the product of a male jackrabbit and a female antelope. Jackalopes possess an uncanny ability to mimic human sounds. In the Old West, when cowboys would gather by their campfires to sing at night, jackalopes would frequently be heard singing back, mimicking the voices of the cowboys. Jackalopes become especially vocal before thunderstorms, perhaps because they mate only when lightning flashes—or so it is theorized—which explains the rarity of this species. When chased, the jackalope will use its vocal abilities to elude capture. Jackalope milk is particularly sought after because it is believed to be a powerful aphrodisiac—for which reason the jackalope is also sometimes referred to as the ‘horny rabbit.’ Save The Pacific Northwest Tree Octopus. Help Save The ENDANGERED From EXTINCTION! 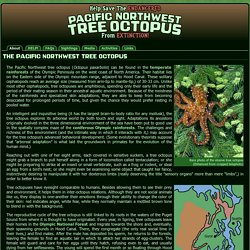 The Pacific Northwest Tree Octopus Rare photo of the elusive tree octopus (Enhanced from cropped telephoto) The Pacific Northwest tree octopus (Octopus paxarbolis) can be found in the temperate rainforests of the Olympic Peninsula on the west coast of North America. Their habitat lies on the Eastern side of the Olympic mountain range, adjacent to Hood Canal. An intelligent and inquisitive being (it has the largest brain-to-body ratio for any mollusk), the tree octopus explores its arboreal world by both touch and sight. Map of estimated tree octopus maximum range, including spawning waters Tree octopuses have eyesight comparable to humans. Aluminum Foil Deflector Beanie. Welcome to the AFDB Website This site is dedicated to spreading the word about the Aluminum* Foil Deflector Beanie and how it can help the average human. 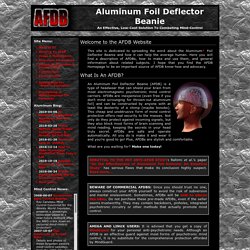 Here you will find a description of AFDBs, how to make and use them, and general information about related subjects. I hope that you find the AFDB Homepage to be an important source of AFDB know-how and advocacy. What Is An AFDB? An Aluminum Foil Deflector Beanie (AFDB) is a type of headwear that can shield your brain from most electromagnetic psychotronic mind control carriers. What are you waiting for? REBUTTAL TO THE MIT ANTI-AFDB STUDY: Rahimi et al.' BEWARE OF COMMERCIAL AFDBS: Since you should trust no one, always construct your AFDB yourself to avoid the risk of subversion and mental enslavement. AMIGA AND LINUX USERS: It is advised that you get a copy of MindGuard for your personal anti-psychotronic needs.