Aging population. The challenges of greening urban mobility in the post-pandemic era – Environment Focus. It’s time for an alternative approach to migration and asylum policy in Europe - Equal Times. The contrast could not be starker. 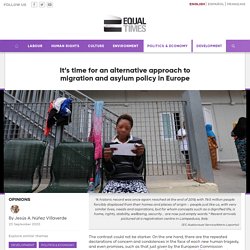 On the one hand, there are the repeated declarations of concern and condolences in the face of each new human tragedy, and even promises, such as that just given by the European Commission president, Ursula von der Leyen, that the European Union’s (EU) asylum and migration policy will be “humane” and based on “mutual support”. On the other, the fact that the Mediterranean has long been a huge cemetery and incidents such as the fire at the Moria refugee camp in Lesbos show how fundamentally unsupportive, securitarian and inhumane the EU’s approach actually is.

Consequently, as part of a desperate and suicidal “every man for himself” approach, many have chosen to make a show of pushing forward an eminently securitarian policy that is ultimately limited to managing the consequences of one mistake after the other. Fortress Europe can no longer afford to ignore what is happening outside its walls. Response: Syrian Refugee Crisis in Jordan and Lebanon (Arab States) The Syrian refugee crisis embodies one of the largest and most protracted and complex humanitarian emergencies of modern times. 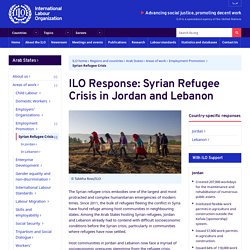 Since 2011, the bulk of refugees fleeing the conflict in Syria have found refuge among host communities in neighbouring states. Among the Arab States hosting Syrian refugees, Jordan and Lebanon already had to contend with difficult socioeconomic conditions before the Syrian crisis, particularly in communities where refugees have now settled. Crisis migration (Labour migration) Fragility, conflict and disaster are the main drivers of forced displacement. 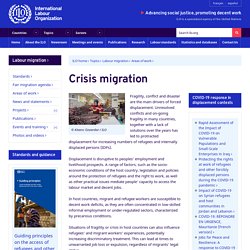 Unresolved conflicts and on-going fragility in many countries, together with a lack of solutions over the years has led to protracted displacement for increasing numbers of refugees and internally displaced persons (IDPs). Displacement is disruptive to peoples’ employment and livelihood prospects. A range of factors, such as the socio-economic conditions of the host country, legislation and policies around the protection of refugees and the right to work, as well as other practical issues mediate people’ capacity to access the labour market and decent jobs. In host countries, migrant and refugee workers are susceptible to decent work deficits, as they are often concentrated in low-skilled informal employment or under-regulated sectors, characterized by precarious conditions. Key Trends ILO Response. Resource guide on international labour migration (ILO Library) "Migration for employment is an important global issue, which now affects most countries in the world. 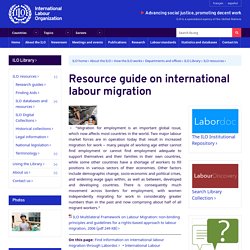 Two major labour market forces are in operation today that result in increased migration for work – many people of working age either cannot find employment or cannot find employment adequate to support themselves and their families in their own countries, while some other countries have a shortage of workers to fill positions in various sectors of their economies. Home - International labour migration - ILO Research Guides at International Labour Organization. Brochure: Guiding principles on the access of refugees and other forcibly displaced persons to the labour market.

Labour migration: The many faces of women and men migrant workers: How do we tackle the immediate crisis and build the future we want for labour migration in a post-COVID-19 world? Join the ILO for a global webinar to discuss key priorities for immediate and longer term actions and to exchange experiences that can help us to “build back better”, and ensure that post-COVID-19 labour migration governance systems are safer, fairer and more sustainable. 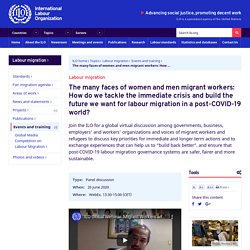 The webinar will be a ‘Davos style’ panel, where panellists will respond to questions from the moderator, before the floor is opened up to questions or interventions from participants.Moderator: Michelle Leighton, Chief Labour Migration, ILO GenevaPanellists: Hon. Czechia: Migration should be based on equal pay. In an effort to limit the entrance of refugees and third country nationals, a Czech Bill aimed at tightening conditions for foreigners and curbing economic migration was passed in April 2017. 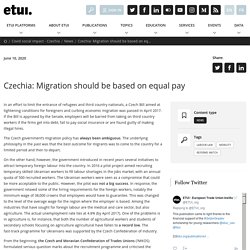 If the Bill is approved by the Senate, employers will be barred from taking on third country workers if the firms get into debt, fail to pay social insurance or are found guilty of making illegal hires. The Czech government’s migration policy has always been ambiguous. The underlying philosophy in the past was that the best outcome for migrants was to come to the country for a limited period and then to depart.

On the other hand, however, the government introduced in recent years several initiatives to attract temporary foreign labour into the country. In 2016 a pilot project aimed recruiting temporary skilled Ukrainian workers to fill labour shortages in the jobs market, with an annual quota of 500 recruited workers. Intra-EU labour migration after Eastern enlargement and during the crisis. This paper by senior ETUI researchers Béla Galgóczi and Janine Leschke looks at recent trends in labour migration from new EU member states to the EU15, with a focus on the impact of the crisis on intra-EU labour mobility. 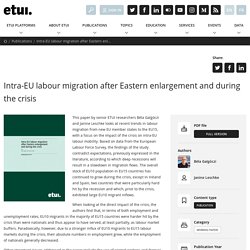 Based on data from the European Labour Force Survey, the findings of the study contradict expectations, previously expressed in the literature, according to which deep recessions will result in a slowdown in migration flows. Labour migration and trade unions. Global Trends to 2030 : The Future of Urbanization and Megacities. Study Session 5  Urbanisation: Trends, Causes and Effects: View as single page. Introduction More than half of the world’s population lives in urban areas. 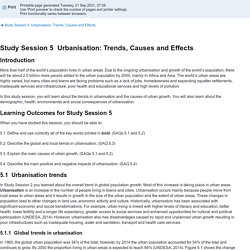 United Nations Population Division. SDGs: Municipalities, regions and their associations are game-changers! Municipalities Planning for a Post-COVID Future. Without question it has been a long spring for municipalities, coping with the shutdown caused by the COVID-19 pandemic, with cities and towns required to close most of their physical facilities and switch to virtual and online models. 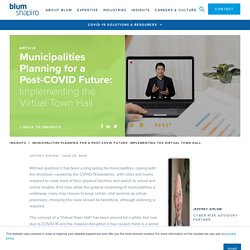 And now, while the gradual reopening of municipalities is underway, many may choose to keep certain vital services as virtual processes; choosing this route should be beneficial, although planning is required. The concept of a “Virtual Town Hall” has been around for a while, but now due to COVID-19 and the massive disruption it has caused, there is a sense of urgency to implement a number of new virtual processes. Creating virtual operations that support critical municipal services includes:

Cities final. Helsinki’s daring bid to rethink the future of urban heating. Yiping Feng and Ling Ouyang Despite having a population of just 5.4 million, the Nordic nation now boasts 10 per cent of the world’s startup exits, with the Finnish capital Helsinki at the epicentre of these flourishing ecosystems. 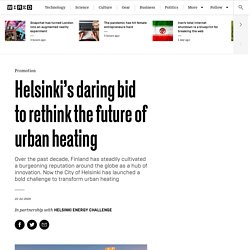 There are 500 startups in Helsinki alone, in industries ranging from gaming to clean tech, fintech, ITC and food services, many of which have attracted substantial interest from foreign venture capitalists. In 2018, foreign investments in Finnish startups exceeded £200 million. So when Jan Vapaavuori became Helsinki’s first elected mayor in June 2017, it was only natural for him to look to harness the city’s culture of innovation and technical expertise to position Helsinki as a global leader among cities in paving the way for a post-carbon economy. At the time, Helsinki had already made impressive progress with meeting global climate targets. Future helsinki. Future cities – finding future-proof architecture and urban planning in Amsterdam. Back in the past, the future looked a whole lot different from now. Mainly, we thought it would involve flying cars. And maybe a couple of jetpacks. These days, however, visions of our future cities don’t tend to feature all that many cars at all, be they airborne or not.

Homo Urbanus Instead, when we think about how our cities will cope with a continued influx of people – it’s expected that two-thirds of the global population will be living in an urban environment by 2050 – combined with a whole plethora of challenges and risks resulting from climate change, it’s other ideas that come to the foreground. Cities of Tomorrow. COVID-19 has already significantly altered urban life, both physically and socially. From temporarily widened sidewalks, replacing car parking spaces and roadway with cycleways, to allowing restaurants to expand into the street to enable social distancing, these changes are transforming the urban streetscape.

In parallel, citizens are demanding that cities are built back better to become liveable, sustainable and affordable, which requires action on climate and resilience, the provision of vital social infrastructure (health and housing) and the enabling digital infrastructure required for our new normal. This is set against record budget shortfalls, dwindling tax revenues and record unemployment, while health, sanitation and housing costs have accelerated, putting city budgets into deficit.

Urbanisation worldwide. Goal 11: Sustainable cities and communities. More than half of us live in cities. By 2050, two-thirds of all humanity—6.5 billion people—will be urban. Sustainable development cannot be achieved without significantly transforming the way we build and manage our urban spaces. How do we define cities, towns, and rural areas?

Because national definitions of urban and rural areas differ significantly from one country to another, it is difficult to compare these areas across national borders. If we can’t compare the performance of urban or rural areas across national borders, then we can’t learn from policies used in other countries. It also means we cannot meaningfully compare the United Nations (UN) Sustainable Development Goals' (SDGs) indicators for urban and rural areas across countries. 202009 managing migration eu financial support to greece en. New Pact on Migration and Asylum, setting out a fairer, more European approach. An official website of the European UnionAn official EU websiteHow do you know? All official European Union website addresses are in the europa.eu domain.

Global Compact for Save, Regular, and Orderly Migration) ist ein Meilenstein der internationalen Migrationspolitik. EPRS BRI(2020)652062 EN. Goal 11: Sustainable Cities and Communities. The upcoming New Pact on Migration and Asylum. A courageous and ambitious New Pact on Migration and Asylum is one that strengthens the right to asylum; sets the conditions for more equal relationships with third countries when it comes to managing migration; and puts forward a mechanism that can foster genuine solidarity between member states.

When the new Commission entered into office in December 2019, it promised a fresh start on migration, breaking the deadlock between member states on long-awaited reforms. Unfortunately, based on a range of leaked papers and official (draft) documents that have been circulating since late 2019, it seems that the Commission may opt to reduce the New Pact to a collection of watered-down compromises on responsibility-sharing. It also appears to be doubling down on control-oriented measures. put forward a mechanism for meaningful solidarity between member states. Read the full paper here. The posting of workers saga: a potted version of the challenges engulfing social Europe.

Asylum-seekers, refugees and labour market integration in Europe. Transfer stimulates dialogue between the European trade union movement and the academic and research community. It contributes research findings on issues of strategic relevance for trade unions, in particular with regard to developments at the European level. Migrant workers in Fortress Europe. Second-generation EU migrants outperform natives on the labour market. Why Are America’s Three Biggest Metros Shrinking? Age of golden workers: Many seniors working into 80s and 90s to stay active, Lifestyle News. Don’t be fooled – workers’ rights will suffer outside the EU – by Nicola Countouris and K D Ewing – UK Labour Law.