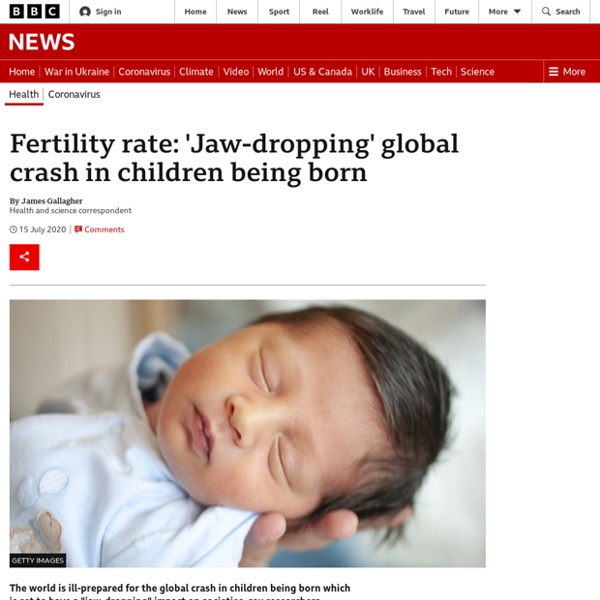 Image copyright Getty Images The world is ill-prepared for the global crash in children being born which is set to have a "jaw-dropping" impact on societies, say researchers. Falling fertility rates mean nearly every country could have shrinking populations by the end of the century. And 23 nations - including Spain and Japan - are expected to see their populations halve by 2100. Countries will also age dramatically, with as many people turning 80 as there are being born. What is going on? The fertility rate - the average number of children a woman gives birth to - is falling. If the number falls below approximately 2.1, then the size of the population starts to fall. In 1950, women were having an average of 4.7 children in their lifetime. As a result, the researchers expect the number of people on the planet to peak at 9.7 billion around 2064, before falling down to 8.8 billion by the end of the century. Why are fertility rates falling? In many ways, falling fertility rates are a success story.

Driveways Barnet [ezcol_1third] 5 Reasons to choose Stonecraft Landscapes Ltd: No deposit or payment until completion of workFully insured and guaranteedFull project planning and management from start to finishRecommended and approved by Trust Mark, Federation of Master Builders (FMB), Local Authority Building Control (LABC)Free home consultation and advice Here’s another video showing how we lay all our natural lawn. IHME: World population likely to shrink after mid-century, forecasting major shifts in global population and economic power - By 2100, projected fertility rates in 183 of 195 countries will not be high enough to maintain current populations without liberal immigration policies. - World population forecasted to peak in 2064 at around 9.7 billion people and fall to 8.8 billion by century's end, with 23 countries seeing populations shrink by more than 50%, including Japan, Thailand, Italy, and Spain. - Dramatic declines in working age-populations are predicted in countries such as India and China, which will hamper economic growth and lead to shifts in global powers.

Spain's population set to drop 11% by 2050 Spain by 2050 will be a depopulated nation dominated by elderly and single people, according to a report that predicts the country will have lost 5.3 million inhabitants, or 11% of the current population, by the middle of the century. Spain’s low birth rate and high life expectancy are seen as a demographic problem that the report, released by the national statistics office on Thursday, expects to become more entrenched. If the trends continue, by 2050 the over-65s will make up 34.6% of the population, while close to a quarter of a million Spaniards will be over 100 years old. By that date there will be 1.7 million fewer children under 10 than there are today. A country also once famed for large families seems destined to become a nation of singletons, with single-person households rising by about a fifth over the next 15 years, to make up 28% of the total.

Apple Daily: Hong Kong newspaper defiant after crackdown Image copyright Reuters Hong Kong's Apple Daily newspaper has vowed to "fight on" after the arrest of owner Jimmy Lai under a controversial security law imposed by Beijing. In extraordinary scenes streamed by the paper on Monday a handcuffed Mr Lai was led through his newsroom as nearly 200 police officers raided the building. The pro-democracy activist was among 10 people arrested on charges including colluding with foreign forces. The move sparked global condemnation of the escalating crackdown on dissent. US Secretary of State Mike Pompeo said China had "eviscerated Hong Kong’s freedoms".

Age of golden workers: Many seniors working into 80s and 90s to stay active, Lifestyle News Mr Henry Lim, 81, hangs out by the swimming pool and tennis courts four to five days a week, but instead of lounging around, he is working. A facilities assistant at Mandarin Gardens condominium in Siglap, he registers residents who want to use facilities such as the gym, swimming pool and tennis and squash courts. “I like my job because it lets me meet people. I treat my colleagues and the residents like my friends and I like to make friends,” he says. In the past, he was a transportation and taxi coordinator as well as an operations assistant at a local sports club. The grandfather of three and father of two daughters started his current job in November.

Demographics of Spain - Wikipedia Population density by municipality in Spain, 2008 As of January 1, 2014, Spain had a total population of 46,507,760, which represents a 0.5% decrease since 2013.[1] The CIA Factbook (2011) gives a racial description of "composite of Mediterranean and Nordic types" under "ethnic groups" instead of the usual breakdown of ethnic composition. This reflects the formation of the modern Kingdom of Spain by the accretion of several independent Iberian realms, i.e., León, Castile, Navarre, the Crown of Aragon, Granada, etc. Spain's population peaked in 2012, at 46,818,216 people. Spain's official population fell by 206,000 to 47.1 million, mostly because of immigrants returning home due to the effects of the European economic and fiscal crisis.[2] Its population density, at 91.4 inhabitants per square kilometre (237/sq mi), is lower than that of most Western European countries.

Coronavirus: World's biggest gambling hub reopens for business Image copyright Getty Images Macau has taken its first steps on the road to recovery as the casino capital starts issuing tourist visas again. Asia's gambling hub became a ghost town after coronavirus lockdowns saw a severe downturn in visitors. Macau authorities said they will slowly start handing out tourist visas from Wednesday to bring gamblers back. Casino operators have been losing $15m (£11.5m) daily in expenses, according to estimates. Visas for both individuals and group tours from mainland China will be restored in phases.

Italian village celebrates first birth in eight years People living in Italy’s smallest village are celebrating the arrival of a new inhabitant – the first baby born there in eight years. The population in Morterone, a mountainous community in Lombardy, rose to 29 after the birth of a baby boy, named Denis, on Sunday. “It truly is a celebration for the whole community,” Antonella Invernizzi, the mayor of Morterone, told Corriere della Sera. Denis’s parents, Matteo and Sara, followed the Italian tradition of announcing the birth by placing a ribbon – blue for a boy and pink for a girl – on the door of their home. It is the first time such a ribbon has been seen in the village since 2012, when a baby girl was born. Denis was born in Alessandro Manzoni hospital in Lecco, weighing 2.6kg.