Ten Unsolved Ancient Archaeological Mysteries. Over the years, Ancient Origins has reported on thousands of archaeological mysteries that have not yet been solved. 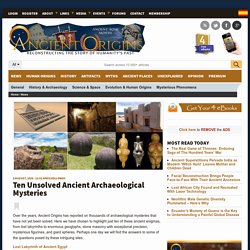 Here we have chosen to highlight just ten of these ancient enigmas, from lost labyrinths to enormous geoglyphs, stone masonry with exceptional precision, mysterious figurines, and giant spheres. Perhaps one day we will find the answers to some of the questions posed by these intriguing sites. Lost Labyrinth of Ancient Egypt “This I have actually seen, a work beyond words. Culture Trip. Want to hike through the Buda Hills overlooking Hungary’s capital? 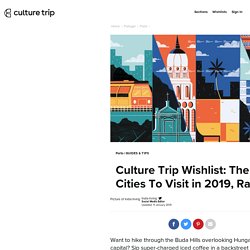 Sip super-charged iced coffee in a backstreet in Ho Chi Minh City? Dance ’til dawn in a Lima nightclub? Look no further: Culture trip’s inaugural travel wishlist tells you how – and when – to enjoy the world’s 12 best cities for culture in 2019. Trends In Japanese Archaeological Research. You Might Soon Be Able To Travel From Toronto To Buffalo In 12 Minutes By Hyperloop. Archaeology – Strange Unexplained Mysteries. Five 19th-Century Poems. Oh! 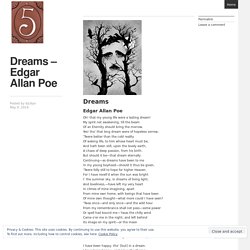 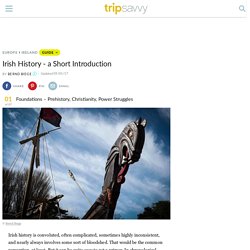 Recommendations on how to Read Ulysses by James Joyce. James Joyce’s ambitious novel Ulysses with its multi-varied stylistic techniques, convoluted plot, and a plethora of literary and historical references discourages people to finish the book, even so, that most give up after only reading the first 100 pages. 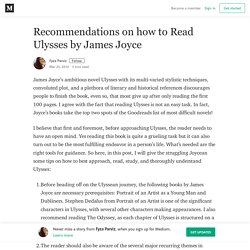 I agree with the fact that reading Ulysses is not an easy task. In fact, Joyce’s books take the top two spots of the Goodreads list of most difficult novels! I believe that first and foremost, before approaching Ulysses, the reader needs to have an open mind. Yes reading this book is quite a grueling task but it can also turn out to be the most fulfilling endeavor in a person’s life. What’s needed are the right tools for guidance. Before heading off on the Ulyssean journey, the following books by James Joyce are necessary prerequisites: Portrait of an Artist as a Young Man and Dubliners. Gilbert schema for Ulysses. Punk archaeology 2014. BERGHAHN BOOKS : Archaeogaming: An Introduction To Archaeology In And Of Video Games.

Andrew Reinhard - Archaeology, The University of York. Archaeogaming – Exploring the archaeology in (and of) video games. Article - Martyn Bennett and Article12.org's feature on Gypsy Traveller Folk. By the age of twelve I was winning prizes in many of the junior piping competitions around Scotland, however I was really more interested in playing the folk scene. 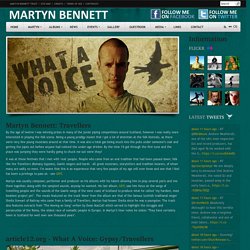 Being a young prodigy meant that I got a lot of attention at the folk festivals, as there were very few young musicians around at that time. It was also a total gas being snuck into the pubs under someone’s coat and getting the pipes out before anyone had noticed the under-age drinker. By the time I’d got through the first tune and the place was jumping they were hardly going to chuck me out were they? It was at these festivals that I met with 'real' people. People who came from an oral tradition that had been passed down; folk like the Travellers (Romany Gypsies), Gaelic singers and bards - all great musicians, storytellers and tradition bearers, of whom many are sadly no more.

The Language of Traveller Storytellers. To the question of the origin of the Scottish travelling people there is no simple answer and there is no hard and fast historical evidence to prove the various theories that have been put forward. 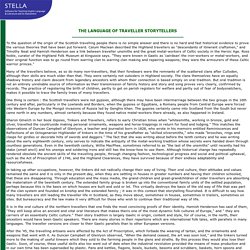 Calum Maclean described the Highland travellers as "descendants of itinerant craftsmen," and Timothy Neat and Hamish Henderson see a link between traveller unsmiths and the great metal-workers of Celtic society in the Heroic Age. Ross Noble, curator of the Highland Folk Museum at Kingussie says. "They were known in Gaelic as 'cairdean' the iron-workers or metal-workers, and their original function was to go round from warring clan to warring clan making and repairing weapons; they were the armourers of these Celtic warrior princes.

" A survey of the province of Moray : historical, geographical, Maladaptive daydreaming. Maladaptive daydreaming is typically associated with stereotypical movements, such as pacing or rocking, and the need for musical stimulation.[4] One of the lead researchers of maladaptive daydreaming and the person who coined the term is University of Haifa professor Eli Somer.[5][6] Somer's definition of the condition is “extensive fantasy activity that replaces human interaction and/or interferes with academic, interpersonal, or vocational functioning.”[7] Range of daydreaming activity[edit] Many human experiences range between the normal to the abnormal. 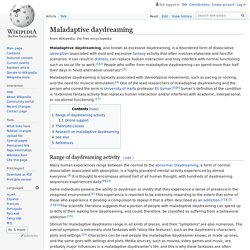 Daydreaming, a form of normal dissociation associated with absorption, is a highly prevalent mental activity experienced by almost everyone.[8] It is thought to encompass almost half of all human thought, with hundreds of daydreaming sequences experienced daily.[9][10] Stimuli for maladaptive daydreams range in all kinds of places, and their "symptoms" are also numerous. Maladaptive daydreaming is not a psychosis issue. See also[edit] Can Twitch Chat beat ITSELF in a Videogame Tournament? What Games Are Like For Someone Who Doesn't Play Games. Kiss Me, I’m 61.5% Irish. THE YEAR HAS BEEN A JUMBLE FOR ME. 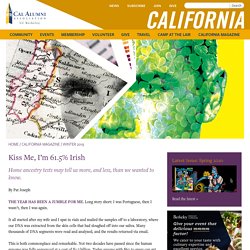 Long story short: I was Portuguese, then I wasn’t, then I was again. It all started after my wife and I spat in vials and mailed the samples off to a laboratory, where our DNA was extracted from the skin cells that had sloughed off into our saliva. Many thousands of DNA segments were read and analyzed, and the results returned via email. Bell Beaker culture. Archaeological culture The Bell Beaker culture follows the Corded Ware culture and for north-central Europe the Funnelbeaker culture. 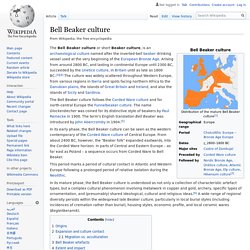 The name Glockenbecher was coined for its distinctive style of beakers by Paul Reinecke in 1900. The term's English translation Bell Beaker was introduced by John Abercromby in 1904.[5] In its early phase, the Bell Beaker culture can be seen as the western contemporary of the Corded Ware culture of Central Europe. From about 2400 BC, however, the "Beaker folk" expanded eastwards, into the Corded Ware horizon. This period marks a period of cultural contact in Atlantic and Western Europe following a prolonged period of relative isolation during the Neolithic.

José Alves desenterrou as raízes pagãs da cultura nortenha. Existe, segundo o fotógrafo José Alves, um quadro imaginário que corresponde ao “território agreste” que compõe as regiões do Minho, Trás-os-Montes e Galiza. Irish and Portuguese - Genetic similarity. Publicada por Arith Härger / 4:49 PM / It might seem a little uncanny, but a recent genetic research shows that there are strong similirities between the Y chromosome haplotypes from the males of northern-western Spain and of Portugal with the Irish men who often appear with Gaelic surnames, but not just that group.The frequency of Y-DNA haplogroup R 1b which is the most common haplogroup in the continent of Europe, is in fact the highest in the populations of the Atlantic Europe, and also due to the mass European emigrations, it is also very common in North America, South America and Australia.

Medieval European magic. During the Middle Ages magic in Europe took on many forms. Instead of being able to identify one type of magician, there were many who practiced several types of magic in these times, including: monks, priests, physicians, surgeons, midwives, folk healers, and diviners.[1] The practice of “magic” often consisted of using medicinal herbs for healing purposes. Classical medicine entailed magical elements, they would use charms or potions in hopes of driving out a sickness. Medieval Magic[edit] Medical Magic[edit] Charms[edit] International Gothic Cuisine. Hello, Great Courses fans. This audio-podcast has been cooked, removed from the oven, and is being lovingly delivered to a new audio-platform. In its absence, please enjoy the video series that it was based off, streaming now on The Great Courses Plus. Click here to watch it now.The following episode transcript and images will remain for posterity.

Enjoy! Haniel. Angel in Jewish lore and angelology Haniel (Hebrew: הניאל, "Joy of God" or Hebrew: חַנִּיאֵל, "Grace of God,"; Coptic: ⲁⲛⲁⲛⲓⲏⲗ[1]; Arabic: عنيائيل‎, 'Anya'il), also known as Anael, Hanael or Aniel, is an angel in Jewish lore and angelology, and is often included in lists as being one of the seven archangels.[2] Haniel is generally associated with the planet Venus, and is the archangel of the sephirah Netzach. The name Haniel probably derives from Hebrew hana'ah, "joy," "pleasure" (qualities associated with Venus) + the suffix -el, "God.

" Viriathus. Viriatus developed alliances with other Iberian groups, even far away from his usual theatres of war, inducing them to rebel against Rome. He led his army, supported by most of the Lusitanian and Vetton tribes as well as by other Celtiberian allies, to several victories over the Romans between 147 BC and 139 BC before being betrayed by them and murdered while sleeping. Of him, Theodor Mommsen said, "It seemed as if, in that thoroughly prosaic age, one of the Homeric heroes had reappeared. "[2] Etymology[edit] Time: The History & Future of Everything – Remastered. Overpopulation & Africa.