1er déc. 2020 The government can’t keep up with abandoned oil wells. Can these industry insiders help? In that case, a landowner might be waiting a long time. 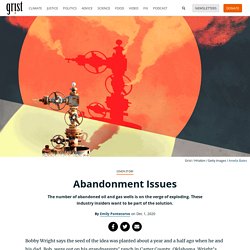 The state currently has just over 800 wells on its list of plugging projects, according to a spokesperson for the Oklahoma Corporation Commission, the state agency that regulates the oil and gas industry, and more than 12,000 more on its list of “orphaned” wells. (In Oklahoma, that term refers to abandoned wells that could technically be “adopted” and pumped again — but the spokesperson said “many of them” are fated to move over to the state’s plugging list.) In 2019, the state plugged just 138 abandoned wells. This isn’t just a problem for Oklahoma.

Natural gas leaks are a much bigger problem than we thought. Natural gas has been touted as a green energy source by some because, when burned for fuel, it emits less CO2 than coal. 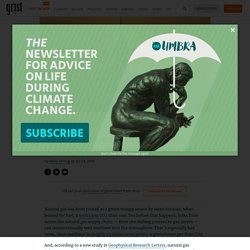 But before that happens, leaks from across the natural gas supply chain — from the drilling process to gas stoves — can unintentionally vent methane into the atmosphere. That’s especially bad news, since methane is roughly 25 times more potent a greenhouse gas than CO2. Fracking-threatens-songbird-nesting-and-reproductive-success. Fracking waste more likely to be located in poor communities and neighborhoods of color. Hydraulic fracturing — using a high-pressure injection of liquid into rock to release natural gas or oil — involves using a lot of water. 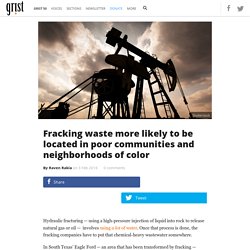 Once that process is done, the fracking companies have to put that chemical-heavy wastewater somewhere. In South Texas’ Eagle Ford — an area that has been transformed by fracking — wastewater storage units are located disproportionately in neighborhoods of color and communities with higher levels of poverty, according to a recent study. Environmental Health News reports: After the Southwest Workers Union — where [Chavel] Lopez works as the labor coordinator — expressed concern about Eagle Ford fracking waste, [study author Jill] Johnston and colleagues looked at the racial and economic makeup of residents where oil and gas disposal wells were permitted between 2007 and 2014 in the heavily fracked Eagle Ford area of Texas. Tuts & Resources. (126) Facebook. Is Our Food Fracked? Fracking, or hydraulic fracturing, is a method of natural gas extraction using deep natural gas well drilling. 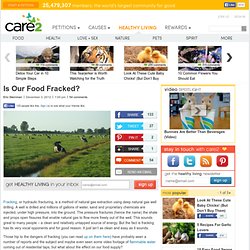 A Deaf Whale is a Dead Whale: Seismic Airgun Testing for Oil and Gas Threatens Marine Life and Coastal Economies. According to government estimates, 138,500 whales and dolphins will soon be injured and possibly killed along the East Coast if exploration companies are allowed to use dangerous blasts of noise to search for offshore oil and gas. 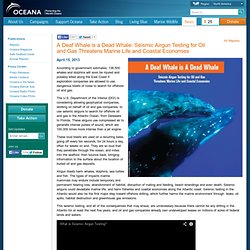 The U.S. Department of the Interior (DOI) is considering allowing geophysical companies, working on behalf of oil and gas companies, to use seismic airguns to search for offshore oil and gas in the Atlantic Ocean, from Delaware to Florida. 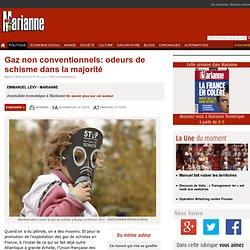 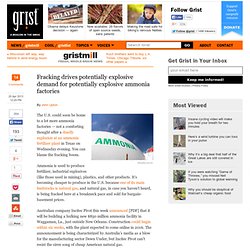 You can blame the fracking boom. Ammonia is used to produce fertilizer, industrial explosives (like those used in mining), plastics, and other products. It’s becoming cheaper to produce in the U.S. because one of its main feedstocks is natural gas, and natural gas, in case you haven’t heard, is being fracked here at a breakneck pace and sold for bargain-basement prices. Australian company Incitec Pivot this week announced [PDF] that it will be building a hulking new $850 million ammonia facility in Waggaman, La., just outside New Orleans. Construction could begin within six weeks, with the plant expected to come online in 2016.

BREAKING: One Dead in Oil and Gas Well Explosion in Ohio. EcoWatch [Editor's note: I just received clarification that earlier reports that two had died in the oil and gas explosion south of Bolivar was incorrect. 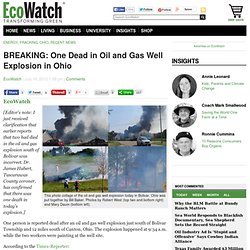 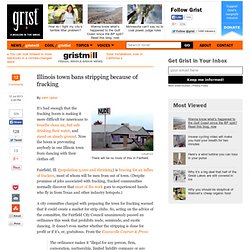 Now the boom is preventing anybody in one Illinois town from dancing with their clothes off. Fairfield, Ill. CHEC Marcellus Shale Gas Extraction Documentary with Terry Greenwood on 6/12/2010 Part 1. Marcellus Shale Reality Tour Part 3 EPA comes to Dimock. Explosion at West Virginia fracking site seriously injures four. Federal investigators are trying to figure out what caused an explosion at a West Virginia fracking site over the weekend. 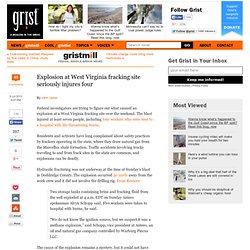 The blast injured at least seven people, including four workers who were sent to a hospital with life-threatening burns. Residents and activists have long complained about safety practices by frackers operating in the state, where they draw natural gas from the Marcellus shale formation. Traffic accidents involving trucks traveling to and from frack sites in the state are common, and explosions can be deadly. What the frack do we know? Not much, it turns out. Remember the scene in the movie Gasland where the guy lights his tapwater on fire?

No? Here it is: Fracking for uranium, first accidentally, and now on purpose. What has 92 protons, deforms growing children, sickens adults, and is being squeezed out of its underground lair by frackers operating in Pennsylvania? U[hh], uranium! The toxic and radioactive heavy metal is naturally trapped in the Marcellus shale, the fossil-fuel-laden rock formation popular with frackers that stretches from upstate New York through Pennsylvania to West Virginia and Ohio. We know the uranium is in there, and we know fracking sets it free, because scientists have been saying as much for years. Que se passe-t-il sur l' île d'Anticosti ? Another drilling blowout in the Gulf, another explosion. An offshore natural-gas platform burned through the night off the coast of Louisiana following a blowout and explosion on Tuesday. A drilling company was completing a sidetrack well 115 miles south of New Orleans on Tuesday morning, which likely means it was boring a new hole into an existing well, when gas began spewing uncontrollably from the seafloor.

The rig’s crew of 44 workers was evacuated as natural gas formed a sheen in the waters around it and billowed dangerously into the air. Hours later, while everybody was at a safe distance, the gas ignited, triggering a conflagration that still had not been extinguished as of this writing. From the AP: No injuries were reported as a result of the fire, Eileen Angelico, a spokeswoman for the Bureau of Safety and Environmental Enforcement, told The Associated Press.She said it wasn’t known what caused the gas to ignite. Look what the gas and oil industry did to the Gulf of Mexico — again. Sheens of oil atop the Gulf of Mexico have become a depressingly familiar sight — the result of reckless drilling by the oil and gas industry.

Here is a photograph shot Wednesday of the latest such debacle. An old natural gas well off Louisiana’s coastline was being sealed shut Monday when it began leaking, 144 feet beneath the water’s surface. This photo is one of a series taken during a flight over the site by On Wings of Care, an environmental nonprofit. From On Wings of Care’s blog post: National Parks Are Threatened By Oil And Gas Drilling. Written by Jessica Goad Here’s another example of how “the score card shows that the industry is winning,” as the NY Times put it last year. The National Parks Conservation Association today released a new report warning of the risks that oil and gas drilling pose to national parks. Chemical Disclosure - Home. Fracking ourselves to death in Pennsylvania. More than 70 years ago, a chemical attack was launched against Washington state and Nevada. It poisoned people, animals, everything that grew, breathed air, and drank water. The Marshall Islands were also struck.

This formerly pristine Pacific atoll was branded “the most contaminated place in the world.” As their cancers developed, the victims of atomic testing and nuclear weapons development got a name: downwinders. What marked their tragedy was the darkness in which they were kept about what was being done to them. Fracking boom could lead to housing bust. When it comes to the real estate market in Bradford County, Pa., where 62,600 residents live above the Marcellus Shale, nothing is black and white, says Bob Benjamin, a local broker and certified appraiser. Big builders hoarding fracking rights beneath new homes. Some American developers have begun quietly holding on to the rights to frack and mine beneath the cookie-cutter houses they sell — and many homebuyers don’t realize it. From a big investigative report by Reuters: [T]ens of thousands of families … have in recent years moved into new homes where their developers or homebuilders, with little or no prior disclosure, kept all the underlying mineral rights for themselves, a Reuters review of county property records in 25 states shows.