Smoke the TPP: How Big Tobacco and "Free Trade" Deals Erode Public Health. Australia, like many other nations, has attempted to mandate tough labeling laws for tobacco products. Wikileaks TPP Revelations Show US “Refusing to Negotiate and Trying to Bully Countries to Do Unethical Things” WikiLeaks recently released documents which shed light on the status of the ongoing TPP negotiations. 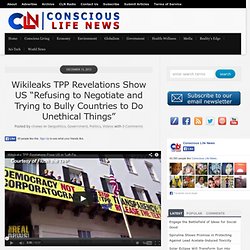 The revelations demonstrate deep disagreement between the United States and negotiating parties on the issue intellectual property, agricultural subsidies, and financial services. Joining TRN in studio to discuss the TPP is Kevin Zeese, who is the co-director of “It’s Our Economy” – an organization that advocates for democratizing the economy. He’s also an organizer with PopulaResistance.org. TPP Negotiators Completely Ignored Public Interest Groups At Last Negotiations. We've noted in the past how little the USTR and other country negotiators wanted to hear from various "civil society" or public interest groups during the various negotiating rounds. 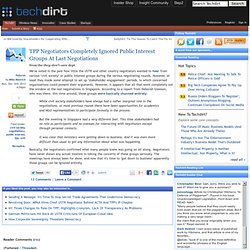 However, at least they made some attempt to set up "stakeholder engagement" periods, in which concerned organizations could present their arguments. However, it appears that all that went completely out the window at the last negotiations in Singapore. According to a report from Deborah Gleeson, who was there, this time around, those groups were basically shunned entirely: While civil society stakeholders have always had a rather marginal role in the negotiations, at most previous rounds there have been opportunities for academics and NGO representatives to participate formally in the process.

Wikileaks releases more TPP documents. Dangers of the Trans-Pacific Partnership (TPP) Secret "Trade" Agreement (Video) President Obama and the ruling class in Washington believe that you should have no privacy, no secrets. 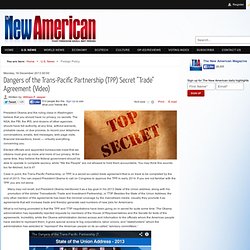 The NSA, the FBI, the IRS, and dozens of other agencies should have full authority, at any time, without warrants, probable cause, or due process, to record your telephone conversations, emails, text messages, web page visits, financial transactions, travel — virtually everything concerning you. Elected officials and appointed bureaucrats insist that we citizens must give up more and more of our privacy. Paul Krugman and TPP. I've got to take some issue with my friend Paul Krugman over his blog post pronouncing the Trans-Pacific Partnership (TPP) no big deal. 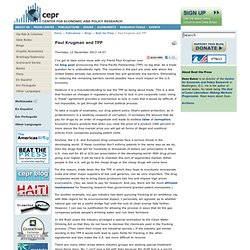 As a trade question he is undoubtedly right. The countries in the pact are ones with whom the United States already has extensive trade ties and generally low barriers. Eliminating or reducing the remaining barriers cannot possibly have much impact on the U.S. economy. However it is a misunderstanding to see the TPP as being about trade. This is a deal that focuses on changes in regulatory structures to lock in pro-corporate rules. Hidden Within The TPP: The RIAA's Secret Plan To Screw Musicians Out Of Their Rights. We've written a few times about how the RIAA has been fighting hard to screw over tons of musicians by taking away their "termination rights. 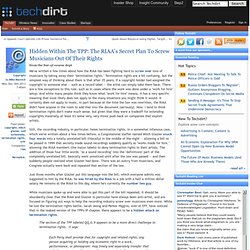 " Termination rights are a bit confusing, but the simplest way of thinking about them is that after 35 years, if a copyright holder had assigned the copyright to someone else -- such as a record label -- the artist can simply take them back. There are a few exceptions to this rule, such as in cases where the work was done under a "work for hire" setup.

When Even Bloomberg Is Saying The TPP Is A Dangerous 'Corporatist Power Grab' That Everyone Should Avoid... Secret Trade Deal Spawns ‘We Will Not Obey’ Movement. For related articles and more information, please visit OCA's Politics and Democracy page. 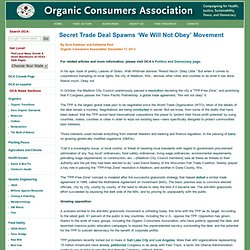 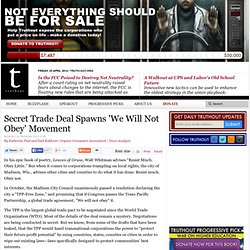 Obey Little.” But when it comes to corporations trampling on local rights, the city of Madison, Wis., advises other cities and counties to do what it has done: Resist much. Obey not. In October, the Madison City Council unanimously passed a resolution declaring the city a “TPP-Free Zone,” and promising that if Congress passes the Trans Pacific Partnership, a global trade agreement, “We will not obey” it. The TPP is the largest global trade pact to be negotiated since the World Trade Organization (WTO). 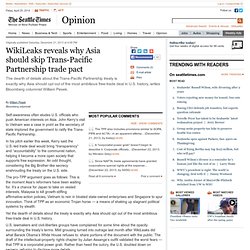 John Kerry’s visit to Vietnam was a case in point as the secretary of state implored the government to ratify the Trans-Pacific Partnership. In his pitch earlier this week, Kerry said the U.S. -led trade deal would bring “transparency” and “accountability” to the communist nation, helping it become a more open society that supports free expression.