Congresswoman GOES OFF On The TPP In A Powerful Message.

Criticism of TPP Fast-track. Dr. Paul Craig Roberts (TPP Criticism) Less Reputable Sources (TPP Criticisms) Sources I don't Know (TPP Criticism) Bernie Sanders – TPP: A Raw Deal for America. And Critics Say It's Even Worse Than They Thought. Sen. Elizabeth Warren on why we need to stop the TPP. A Great Awakening – Public Support for Fake “Free Trade” Deals Plunges in the U.S. and Europe. Trade Deals - (TPP): Too much at risk. Krugman-no-big-deal. Everyone knows that the Obama administration’s domestic economic agenda is stalled in the face of scorched-earth opposition from Republicans. 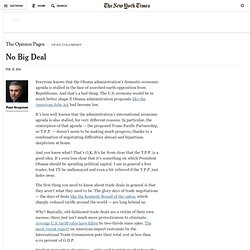 And that’s a bad thing: The U.S. economy would be in much better shape if Obama administration proposals like the American Jobs Act had become law. It’s less well known that the administration’s international economic agenda is also stalled, for very different reasons. In particular, the centerpiece of that agenda — the proposed Trans-Pacific Partnership, or T.P.P. — doesn’t seem to be making much progress, thanks to a combination of negotiating difficulties abroad and bipartisan skepticism at home. And you know what? That’s O.K. The first thing you need to know about trade deals in general is that they aren’t what they used to be. Why? Implicit protection of services — rules and regulations that have the effect of, say, blocking foreign competition in insurance — surely impose additional costs.

Is this a good thing from a global point of view? The Transatlantic Trade and Investment Partnership: The TPP’s Corporate-Friendly European Counterpart. February 28, 2014 While the United States Trade Representative has been finishing up the Trans-Pacific Partnership (TPP), an agreement that covers Pacific Rim economies, it has also been working on the Transatlantic Trade and Investment Partnership (TTIP), a new trade pact with the European Union. 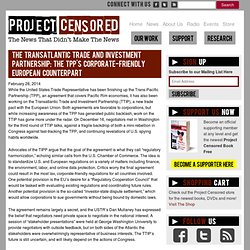 Both agreements are favorable to corporations, but while increasing awareness of the TPP has generated public backlash, work on the TTIP has gone more under the radar. On December 16, negotiators met in Washington for the third round of TTIP talks, against a fragile backdrop of both a mini-rebellion in Congress against fast-tracking the TPP, and continuing revelations of U.S. spying habits worldwide. Advocates of the TIPP argue that the goal of the agreement is what they call “regulatory harmonization,” echoing similar calls from the U.S. 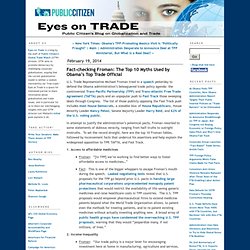 To set the record straight, here are the top 10 Froman fables, followed by inconvenient facts that undercut his assertions and help explain the widespread opposition to TPP, TAFTA, and Fast Track. 1. 2. Trans-Pacific Partnership: Canadian MPs Have No Access To Drafts U.S. Pols Can See, NDP Says. The Conservatives are keeping secret the draft text of a sweeping free trade agreement Canada is negotiating with a dozen Pacific Rim countries, despite the fact that any U.S. congress member can access the document, the NDP says. 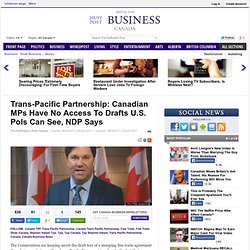 “If the U.S. can allow its legislators to see the TPP text, there is no reason that Canada can’t,” NDP trade critic Don Davies said in a statement. Taiwanese occupy parliament to stop trade deal. Protesters gathered in front of Legislative Yuan in Taiwan and called for a response from the Ma government. 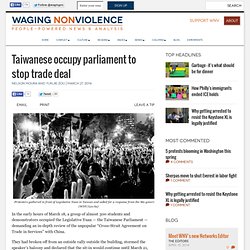 Who Benefits? rcloony. Currently, the Obama Administration is in the process of negotiating two large scale so-called “Free Trade” Agreements. 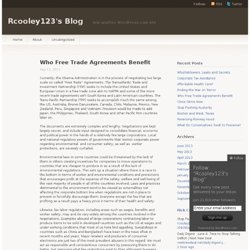 The Transatlantic Trade and Investment Partnership (TTIP) seeks to include the United States and European Union in a free trade zone akin to NAFTA and some of the more recent trade agreements with South Korea and Latin American countries. The Trans-Pacific Partnership (TPP) seeks to accomplish much the same among the US, Australia, Brunei Darussalam, Canada, Chile, Malaysia, Mexico, New Zealand, Peru, Singapore and Vietnam.

Rising Tide of Public Outrage on the Verge of Stopping a Shady Corporate Deal in Washington. Photo Credit: Ted Majdosz January 17, 2014 | Like this article? 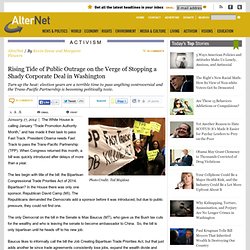 Join our email list: Stay up to date with the latest headlines via email. The White House is calling January “Trade Promotion Authority Month,” and has made it their task to pass Fast Track. White House’s Fast Track Push Facing Serious Opposition. The Hill reports that the White House is pushing hard for “fast track” trade promotion authority, to help push through the Trans-Pacific Partnership and other upcoming “trade” agreements. 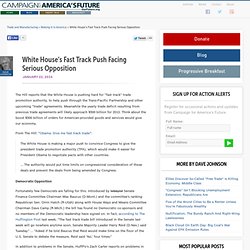 Meanwhile the yearly trade deficit resulting from previous trade agreements will likely approach $500 billion for 2013. Think about the boost $500 billion of orders for American-provided goods and services would give our economy. Major Political Donors Have Access to TPP Documents. Everyone Else? Not So Much. The United States is currently engaged in secret negotiations on the Trans-Pacific Partnership (TPP), a multinational trade agreement with the goal of liberalizing trade among a dozen or so countries that border on the Pacific Ocean. 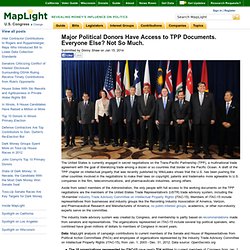 A draft of the TPP chapter on intellectual property that was recently published by WikiLeaks shows that the U.S. has been pushing the other countries involved in the negotiations to make their laws on copyright, patents and trademarks more agreeable to U.S. companies in the film, telecommunications, and pharmaceuticals industries, among others. 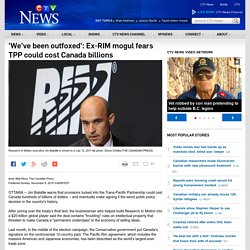 After poring over the treaty's final text, the businessman who helped build Research In Motion into a $20-billion global player said the deal contains "troubling" rules on intellectual property that threaten to make Canada a "permanent underclass" in the economy of selling ideas. TPP Revealed: A Botched Disaster Of Trade Policy Horrors. If America’s so great, why does our trade policy put corporations over people? “It’s out. The clock is ticking on a time bomb that could blow up a free internet: the TPP. After years of secrecy, the Trans-Pacific Partnership (TPP) agreement has finally been released to the public.

The shadowy process and overreaching scope of the deal have sparked an international outcry; it’s been roundly condemned as an attack on worker’s rights, the environment, public health, small businesses and startups. But perhaps the biggest concern is over the impact that it will have on the internet. TPP is a legally binding pact negotiated between 12 countries, including the United States. Industry lobbyists and government bureaucrats huddled for months in closed-door meetings to draft and debate the deal while journalists, human rights advocates and tech experts were locked out. It can’t accurately be called a “trade deal”. The final version of TPP confirms advocates’ worst fears. To fully grasp the impending trainwreck here, it’s important to understand that copyright laws have a profound effect on what internet users can see and do online. The Most Brazen Corporate Power Grab in American History.

(Page 2) There will be a mass mobilization Nov. 14 through 18 in Washington to begin the push to block the TPP. Rising up to stop the TPP is a far, far better investment of our time and energy than engaging in the empty political theater that passes for a presidential campaign. “The TPP creates a web of corporate laws that will dominate the global economy,” attorney Kevin Zeese of the group Popular Resistance, which has mounted a long fight against the trade agreement, told me from Baltimore by telephone.

Spread The Word: TPP Is Toxic Political Poison That Politicians Should Avoid. At its root, the TPP is about modern colonialism. It is the way that Western governments and their transnational corporations, including Wall Street banks, can dominate the economies of developing nations. And it’s not too late to stop it. TPP_and_Canada.pdf. Calling TPP Foes ‘Simplistic,’ USA Today Simply Gets the Numbers Wrong. The Trans-Pacific Partnership and the Death of the Republic. This Is Not A Trade Agreement.

Odd Bedfellows, Lying Together. Come one, come all. Step right up and buy your ticket for a ride on the splendiferous, phantasmagoric, and miraculous Trans-Pacific Partnership! The TPP isn't some sort of futuristic flying machine. It's just another global trade scam coming at us like a volcanic eruption straight out of hell. This thing is a "partnership" of, by, and for global corporations - similar to NAFTA, only much, much bigger and far more destructive both to the middle class and to our people's sovereignty. After hammering out backroom deals in strict secrecy over the past seven years, a cabal of White House negotiators and corporate lobbyists are now ready to spring it on us.