Netflix's New Look Is a Glimpse at the Future of TV. Netflix just announced a whole new browsing experience for users who access the service on more than half the devices that run it, from game consoles to smart TVs. 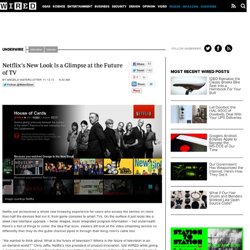 On the surface it just looks like a sleek new interface upgrade – better images, more integrated program information – but underneath there’s a hint of things to come: the idea that soon, viewers will look at the video-streaming service no differently than they do the guide channel piped in through their living room’s cable box. “We wanted to think about ‘What is the future of television? Where is the future of television in an on-demand world?’” Chris Jaffe, Netflix’s vice president of product innovation, told WIRED while giving a demonstration of the new TV interface’s capabilities. “We also look at this as the first step of a lot of our television innovation to come.” And it looks pretty slick. Netflix Says Binge Viewing is No 'House of Cards' Origin of the series: how TV producers are adapting for on demand. Ten years ago, the TV industry was a simpler place. People watched a show on television, then perhaps bought it on DVD if they really loved it.

The biggest thing producers had to worry about was making sure there was a commentary track and some outtakes for the DVD extras. Fast forward a decade and everything has changed. Audiences are fragmented, with relatively small numbers tuning in when a show is broadcast, but many more later watching it on "catch-up" services like BBC's iPlayer in the UK and Hulu Plus in the US. Yet more might illegally download it, or merely watch clips of episodes on YouTube. "We are now challenged with making television that can live beyond its singular broadcast window," explains Dan Tucker, a freelance senior producer who's worked with the BBC, Disney, Endemol and more. "The commissioners who choose and then fund programmes are thinking about audiences in new ways. "

Is franchise cinema mimicking TV storytelling? This article contains spoilers for The Hunger Games: Catching Fire, and the Marvel Cinematic Universe. Many column inches have been dedicated to the question of whether or not television is now better, or at least more satisfying, than cinema. After a summer blockbuster season that held quite a few big let-downs, US TV shows like Breaking Bad, Game Of Thrones and The Walking Dead have continued to get a much warmer reception from viewers. Why We Binge-Watch Television. Can Jackie stay sober? 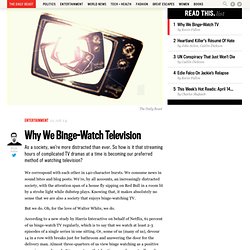 Edie Falco talks about the heartbreaking season premiere of ‘Nurse Jackie,’ and why addiction is an issue she’s so passionate about. Jackie’s off the wagon. The heartbreaking moment came at the end of Nurse Jackie’s season finale last year when, on her way to the party celebrating her first year of sobriety, Jackie Peyton popped another pill. It was a frustrating moment for viewers who keep rooting for TV’s toughest nurse to climb up from rock bottom and carve a life for herself that’s both sober and happy. 'True Detective,' 'American Horror Story' and Why the Anthology Series is All the Rage. Matthew McConaughey and Woody Harrelson in 'True Detective' Michele K. 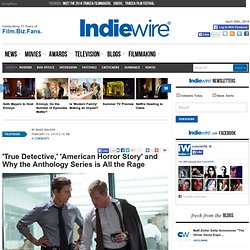 Short/HBO The television landscape is changing, thanks to the growing influence of cable and the rise of new platforms like Netflix. Programming's taking place year-round, seasons are getting shorter, higher profile actors are taking small screen roles -- and lately a new model has arisen that dares to revolutionize the life of a narrative. FX's "American Horror Story," the upcoming "Fargo" and HBO's ongoing "True Detective" are at the forefront of the recent rise of the season-at-a-time anthology series. Each season of these series presents a new story with new characters and a new cast that may or may not include returning members. The anthology in pop culture is rooted in genres such as horror, mystery and science fiction. 'American Horror Story: Coven' Michele K.

Here’s why the new wave of anthologies benefits the writers, the viewers and the cast. Anthologies tell shorter stories with set end points. Is Transmedia In TV Finally Growing Up? Let’s face it; there is now a grey area in online environments between marketing and editorial. Some people call this stuff ‘transmedia’, some call it coverage, and some call it advertorial. It’s actually all of these things. Take the strategy deployed by Warner Bros. for Superman as an example – a three minute blockbuster trailer was released at the same time as a video of General Zod (Superman’s nemesis) appeared on YouTube where he threatened planet Earth through a series of broken messages. The YouTube video is essentially a marketing/advertorial tool, but it also became part of the storyline. 'Transmedia-Structure' in Transmedia: Storytelling for the Digital Age. The Age Of Transmedia: How Brands Can Tell Better Stories. Transmedia. Story Inception, Ideation, and DevelopmentContent Development, Acquisition and Production (Cosmology And Ecosystem Strategy)IP Adaptation, Franchise Development (Intersect Between Media Matrix)Story Iteration Across Medium, Channels, Platforms, Devices, Apps, FeaturesNarrative Persistence and Sustainability (Channel Speciation)Next Generation Experiences & InnovationExperience, Immersion, Innovation, Scale, Planning, SustainabilityExperience Ideation Goals and Super ObjectivesAudience Value PropositionSynchronized Rich Client ExperiencesMultiverse Creative DirectionBroadcast & Digital Television Development, Production and DistributionMotion Picture Development, Production, Distribution, FinancingCosmology, Multiverse and Ecosystem DevelopmentTransplatform, Interoperable and Ubiquity Matrix Strategy, Planning and ExecutionTechnology SynthesisRelationship to RevenuesProduct DesignLicensing, Monetization & Merchandising, CommerceAggregation & Consolidation. 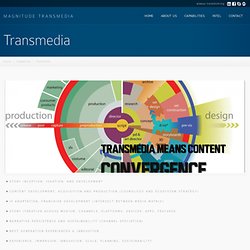 The Three Es: The Value of Transmedia Fiction For Franchise Development by James Waugh. My first tangible encounter with a transmedia franchise came on my sixth birthday. 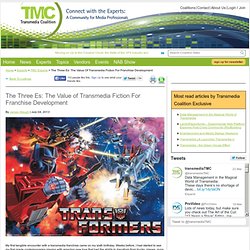 Weeks before, I had started to see my first grade contemporaries playing with amazing new toys that had the ability to transform from trucks, planes, guns, and boom boxes (remember those?) Into the coolest things imaginable to any six-year-old boy: robots! Transmedia Digest. StoryAlity #64 – Why Transmedia Is Destiny. “Why Transmedia Is Destiny…” I bet Nietzsche would enjoy that title..? 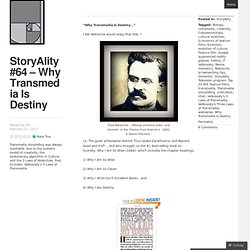 Fred Nietzsche – lifelong practical joker, and inventor of the Theme from Kubrick’s `2001: A Space Odyssey’. i.e. The great philosopher behind Thus Spake Zarathustra, and Beyond Good and Evil*… and who brought us the #1 best-selling book on humility, Why I Am So Wise (1888), which includes the chapter headings: 1) Why I Am So Wise 2) Why I Am So Clever 3) Why I Write Such Excellent Books - and: 'Franchise-Development' in Transmedia: Storytelling for the Digital Age.