Artikis-bg.pdf. Big-data-xeon-e5-trustway-case-study.pdf. BSL8-0044-0023-httpwww_bg_utp_edu_plartarchives20of20transport20system20telematics2008-20112011-112004. Cell phone tracking system reveals how traffic jams start. Smartphones have changed the way we drive, both by adding new distractions and by helping us get where we're going with GPS-assisted directions and real-time information on traffic jams. 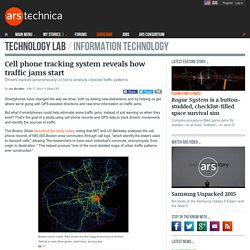 But what if smartphones could help eliminate some traffic jams, instead of just warning us when they exist? That's the goal of a study using cell phone records and GPS data to track drivers' movements and identify the sources of traffic. The Boston Globe described the study today, noting that MIT and UC-Berkeley analyzed the cell phone records of 680,000 Boston-area commuters through call logs, "which identify the towers used to transmit calls," allowing "the researchers to trace each individual’s commute, anonymously, from origin to destination. " This helped produce "one of the most detailed maps of urban traffic patterns ever constructed. " The study was published in December in the journal Scientific Reports, and described in announcements by MIT and Berkeley. 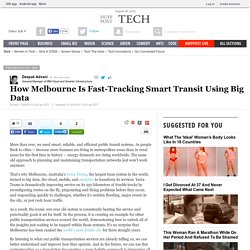 As people flock to cities -- because more humans are living in metropolitan areas than in rural areas for the first time in history -- energy demands are rising worldwide. The same old approach to planning and maintaining transportation networks just won't work anymore. IBM Smarter Cities initiative: Using big data for better traffic flow. City living is making a come back, and with it has come increasing congestion, longer commutes, and bad air quality. 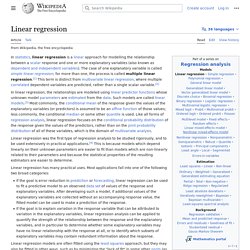 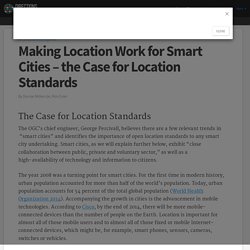 Smart cities, as we will explain further below, exhibit “close collaboration between public, private and voluntary sector,” as well as a high-availability of technology and information to citizens. The year 2008 was a turning point for smart cities. For the first time in modern history, urban population accounted for more than half of the world’s population. Today, urban population accounts for 54 percent of the total global population (World Health Organization 2014). Another trend that calls for open location standards is the growth of 3D spatial visualization, well represented by the city of Berlin’s implementation using OGC’s CityGML standard.

The growth in the Internet of Things (IoT) is part of the smart cities phenomenon. Smart Cities in Action. Metro Vancouver project monitors private cellphones to track traffic jams. Someone else’s cellphone could be helping you avoid a traffic jam. 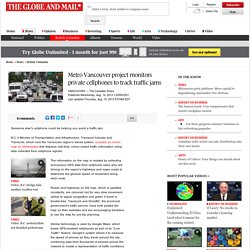 B.C.’s Ministry of Transportation and Infrastructure, Transport Canada and TransLink, which runs the Vancouver region’s transit system, unveiled an online map on Wednesday that displays real-time, colour-coded traffic information using data collected from cellphone signals. The information on the map is created by collecting anonymous GPS data from cellphone users who are driving on the region’s highways and major roads to determine the general speed of movement along each route. Roads and highways on the map, which is updated constantly, are coloured red for very slow movement, yellow to signal congestion and green if travel is trouble-free. 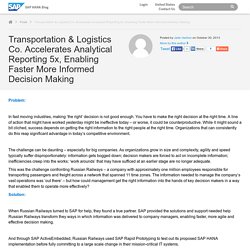 You have to make the right decision at the right time. A line of action that might have worked yesterday might be ineffective today – or worse, it could be counterproductive. While it might sound a bit cliched, success depends on getting the right information to the right people at the right time. Organizations that can consistently do this reap significant advantage in today’s competitive environment. The challenge can be daunting – especially for big companies. 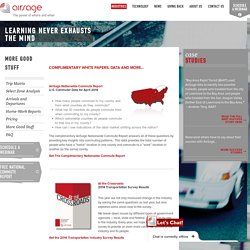