Forget-the-spin-free-trade-is-cover-for-dubious-special-deals-20180302-h0wvw7. TPP: dead, buried, cremated!! November 2016. Analysis Updated It was an ambitious and controversial trade pact that would have covered nearly 40 per cent of the global economy and solidified US leadership in the Asia-Pacific. 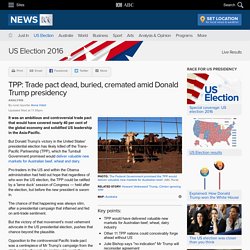 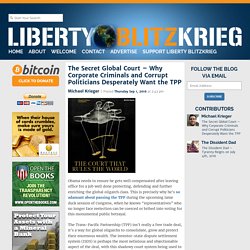 This is precisely why he’s so adamant about passing the TPP during the upcoming lame duck session of Congress, when he knows “representatives” who no longer face reelection can be coerced or bribed into voting for this monumental public betrayal. The Trans-Pacific Partnership (TPP) ins’t really a free trade deal, it’s a way for global oligarchs to consolidate, grow and protect their enormous wealth. The investor-state dispute settlement system (ISDS) is perhaps the most nefarious and objectionable aspect of the deal, with this shadowy court system being used to accomplish the following for the super rich and powerful: 1) Eliminate sovereign risk from their investments. 2) Earn money by scouring the world for potential ISDS “opportunities” and then speculating on them. 3) Escape prosecution from criminality on a global basis.

So gross. A Great Awakening – Public Support for Fake “Free Trade” Deals Plunges in the U.S. and Europe. Public opposition to the sovereignty killing corporate giveaway marketed as a free trade deal known as the Trans Pacific Partnership (TPP) has become so widespread that all the leading candidates for the U.S. 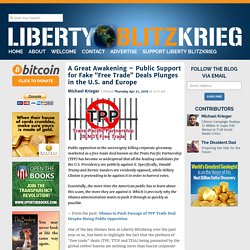 Presidency are publicly against it. Specifically, Donald Trump and Bernie Sanders are virulently opposed, while Hillary Clinton is pretending to be against it in order to harvest votes. Essentially, the more time the American public has to learn about this scam, the more they are against it. Which is precisely why the Obama administration wants to push it through as quickly as possible. – From the post: Obama to Push Passage of TPP Trade Deal Despite Rising Public Opposition. World Bank Report: TPP Will Bring Negligible Economic Benefit To US, Canada And Australia. Supporters of TPP generally insist it's absolutely worth doing, despite any infelicities it might contain, because of the huge overall economic benefit it will bring to participants. 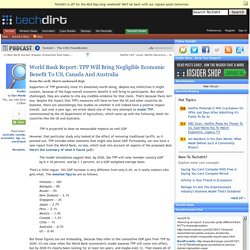 But when challenged, they are unable to cite any credible evidence for that claim. That's because there isn't any: despite the impact that TPP's measures will have on how the US and other countries do business, there are astonishingly few studies on whether it will indeed have a positive impact overall. Just over a year ago, we wrote about one of the rare attempts to model TPP, commissioned by the US Department of Agriculture, which came up with the following result for countries like the US and Australia: TPP is projected to have no measurable impacts on real GDP However, that particular study only looked at the effect of removing traditional tariffs; as it pointed out, TPP includes other elements that might also boost GDP. 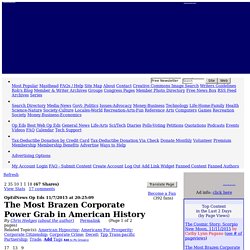 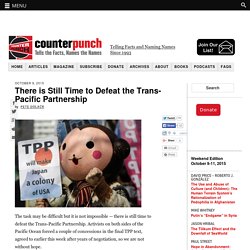 Activists on both sides of the Pacific Ocean forced a couple of concessions in the final TPP text, agreed to earlier this week after years of negotiation, so we are not without hope. More hard work by activists is the only power that can stop the TPP from becoming law in 12 countries. If we fail to stop it, the TPP promises to tighten further the dominance of the world’s biggest multi-national corporations with the implementation of nearly unlimited rights of corporations to overturn health, safety, labor and environmental laws through secret tribunals that bypass and override national legal systems. 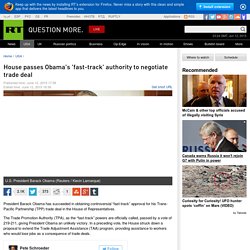 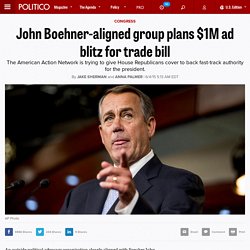 The American Action Network, which spent close to $1 million boosting House Republican leadership during the Department of Homeland Security funding fight, is now spending $375,000 for national television ads on Fox News, $250,000 on mail pieces in 25 GOP districts, $200,000 on digital advertising in 65 districts and $75,000 on radio spots. Story Continued Below The TV advertisement blasts Democrats and trade unions for opposing the bill, and says if Congress doesn’t pass trade promotion authority, China will benefit and America will lose. It’s meant to bolster House GOP leadership’s efforts by giving air cover to Republicans vote for TPA. 10 Reasons Why You Should Oppose TPP and TTIP. The U.S. 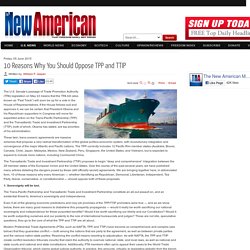 Senate’s passage of Trade Promotion Authority (TPA) legislation on May 22 means that the TPA bill (also known as “Fast Track”) will soon be up for a vote in the House of Representatives. If the House follows suit and approves it, we can be certain that President Obama and his Republican supporters in Congress will move for expedited action on the Trans-Pacific Partnership (TPP) and the Transatlantic Trade and Investment Partnership (TTIP), both of which, Obama has stated, are top priorities of his administration. These twin, trans-oceanic agreements are massive schemes that propose a very radical transformation of the global politico-economic system, with revolutionary integration and convergence of the major Atlantic and Pacific nations. 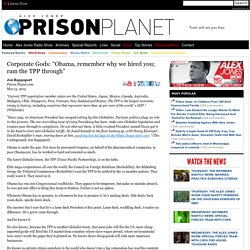 The TPP is the largest economic treaty in history, including countries that represent more than 40 per cent of the world´s GDP.” (Wikileaks) “Since 1945, no American President has escaped vetting by elite Globalists. Partisan politics plays no role in this process. As the Senate Prepares to Vote on “Fast Track,” Here’s a Quick Primer on the Dangers of the TPP. The United States is in the final stages of negotiating the Trans-Pacific Partnership (TPP), a massive free-trade agreement with Mexico, Canada, Japan, Singapore and seven other countries.

Who will benefit from the TPP? American workers? Consumers? The Battle Over the Trans-Pacific Partnership and Fast-Track Gets Hot  President Obama must be having trouble getting the votes for fast-track authority since the administration is now pulling out all the stops to push the deal. This has included a press call where he apparently got testy over the charge by critics that the Trans-Pacific Partnership (TPP) is a secret trade deal. Over a Million People Send ‘No TTIP’ Christmas Card. The Department of Business in Europe got an interesting Christmas greeting this holiday season – an enormous card with a singing Santa Clause carrying a toy sack marked with an obvious message about the unpopular Transatlantic Trade and Investment Partnership (TTIP) – #noTTIP hashtag. If you don’t know what the TTIP is, don’t worry – many individuals aren’t yet aware. Here is a brief description: Global Gov Treaty Coming in Days YouTube. Forget Your Neighbors, You Must Focus On Saving Your Family While You Still Can.

Yesterday, I wrote an article which I found very difficult to publish because of its very dire consequences. Briefly, I explained how the ships carrying vital imports to American shores are not being offloaded. I offered a video of a Los Angeles city councilman, as he traveled about Los Angeles harbor explaining how serious this crisis was becoming and that even if the goods were to be offloaded right away (e.g. February 9, 2015), it would still take 6-8 months for the product to be offloaded in its entirety.

The US Economy Is Days Away From Shutting Down. If the back up of the container cargo ships, in American ports, continues much longer, our stores will soon look like what is pictured here. A Telling Report From Tacoma The Global Economy Has Officially Crashed The BDI has officially reached record lows. A global economic collapse is underway. The Trans-Pacific Partnership: Written in Secrecy, An Affront to Democracy. The Trans-Pacific Partnership: the dirtiest trade deal, you've never heard of. Obama says he willing to defy Democrats on his support of Trans-Pacific Partnership. President Obama listens to a question during a meeting with leading CEO’s to discuss ways to promote the economy and create jobs during his last two years in office at the Business Roundtable Headquarters in Washington.

(Jacquelyn Martin/AP) President Obama signaled Wednesday that, at least on international trade, he is willing to defy his fellow Democrats and his own liberal base to pursue a partnership with Republicans. Trade represents one of Obama’s best chances for a legacy-building achievement in the final two years of his presidency, but he acknowledged that it is an idea he still has to sell to many of his traditional allies. Speaking at a gathering of business leaders, Obama offered his strongest public defense of his administration’s pursuit of a major 12-nation trade deal in the Asia Pacific, known as the Trans-Pacific Partnership (TPP), that has been opposed by Democrats, labor unions and environmental groups.

If TPP Is So Important, Why Are Those It's Supposed To 'Help' Fighting Against It? Huge international campaign beams 3.1 million signature petition count on prominent buildings in Washington, D.C. Massive numbers of people are speaking out against fast track legislation and Trans-Pacific Partnership secrecy as Senate Finance Committee prepares for crucial TPP hearing following President Obama’s return to Washington May 1st, 2014 – As U.S. President Obama returned from a week of crucial Trans-Pacific Partnership (TPP) talks, a large, broad-based international campaign took its message to the heart of Washington, D.C.