17 Incredible Autostraddle Personal Essays By Trans Women. From 2009 through 2011, Autostraddle’s coverage of trans issues could best be characterized as a series of blunders, failures and missteps. 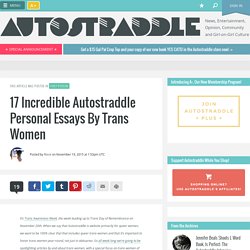 Raised on movies like Ace Ventura: Pet Detective and coming into our lesbian identities in bars and at queer parties occupied by queer cis women and trans men, Laneia and I never decided to intentionally exclude trans women from Autostraddle… we’d just not thought about trans women at all, not even for one second. When we published our first essay by a new trans male writer and readers asked where the trans women were at, I remember thinking “but trans women don’t date women, they date men, right?” Um, wrong! (In fact, the best numbers we have on the topic indicate that two-thirds of trans women identify as lesbian, bisexual, or queer.) Ruby Rose and What Makes Gender Non-Conforming 'Sexy' (Or Not)  Ruby Rose is the girl of the moment. 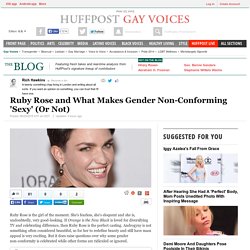 She's fearless, she's eloquent and she is, undoubtedly, very good-looking. If Orange is the New Black is loved for diversifying TV and celebrating difference, then Ruby Rose is the perfect casting. Androgyny is not something often considered beautiful, so for her to redefine beauty and still have mass appeal is very exciting.

But it does raise questions over why some gender non-conformity is celebrated while other forms are ridiculed or ignored. 5 Most Disappointing Things We Learned About HRC's 'White Men's Club' “As a woman, I feel excluded every day,” says an employee of the Human Rights Campaign, the nation's largest LGBT civil rights advocacy group and political lobbying organization, in an internal diversity report released Wednesday. 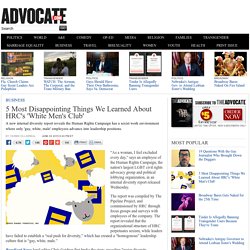 The report was compiled by The Pipeline Project, and commissioned by HRC through focus groups and surveys with employees of the company. The report revealed that the organizational structure of HRC perpetuates sexism, while leaders have failed to establish a “real push for diversity,” which has created a “homogenous” leadership culture that is “gay, white, male.” BuzzFeed News legal editor Chris Geidner first broke the story, revealing "major diversity problems" within the organization. Geidner noted that the report included complaints from many staffers that the work environment at HRC is “extremely judgmental,” especially of women and female-identified people. Revealing Caitlyn Jenner: My Thoughts on Media, Privilege, Healthcare Access & Glamour ‹ Janet Mock. Posted by: Janet Posted date: June 3, 2015 10 Comments Categories: GirlsLikeUs, National Headlines, Trans in the Media, Trans Women, TV June 3, 2015 I wasn’t planning to write about the Vanity Fair cover introducing Caitlyn Jenner to the public. 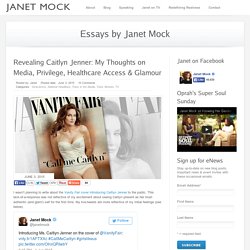 This lack-of-a-response was not reflective of my excitement about seeing Caitlyn present as her most authentic (and glam!) Self for the first time. My live-tweets are more reflective of my initial feelings (see below). Martin1991.pdf. Patheos. Thank you for your interest in Patheos newsletters! 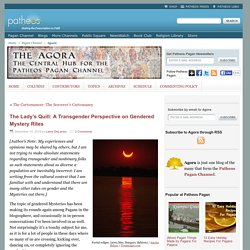 Please enter your email address below and click the "Subscribe" button. Thank you for your subscription. You can visit your Preference Center to complete your profile and see what else we have to offer. We apologize, we were unable to complete your subscription at this time, please try again later. If this error persists please contact us at communications@patheos.com. 10 Simple Steps to Being a Better Cis Partner to Your Trans Girlfriend.

7 Deadly Sins Parents Commit Against Their Transgender Kids – In Memory of Leelah Alcorn. Thank you for your interest in Patheos newsletters! 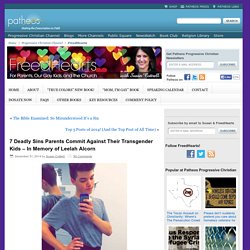 Please enter your email address below and click the "Subscribe" button. Thank you for your subscription. You can visit your Preference Center to complete your profile and see what else we have to offer. 6 Transgender Women's Memoirs You Need To Read Now. How Coming Out to My Mother Taught Me the Complexity of Black Women’s Love - BGD.

By Helen McDonald No one warned me that when I came out, it would provoke a disaster of restorative Black female love. 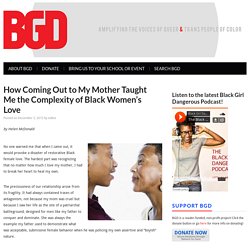 The hardest part was recognizing that no matter how much I love my mother, I had to break her heart to heal my own. The preciousness of our relationship arose from its fragility. 3 Ways the Gay Rights Agenda™ Has Perpetuated Oppression. This past decade, we’ve witnessed quite a few advancements for gay rights in the US: anti-homophobic hate crimes legislation, the repeal of Don’t Ask Don’t Tell, and nationwide marriage equality, to name a few. 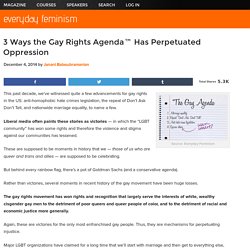 Liberal media often paints these stories as victories — in which the “LGBT community” has won some rights and therefore the violence and stigma against our communities has lessened. These are supposed to be moments in history that we — those of us who are queer and trans and allies — are supposed to be celebrating. But behind every rainbow flag, there’s a pot of Goldman Sachs (and a conservative agenda). Rather than victories, several moments in recent history of the gay movement have been huge losses. The gay rights movement has won rights and recognition that largely serve the interests of white, wealthy cisgender gay men to the detriment of poor queers and queer people of color, and to the detriment of racial and economic justice more generally.

The worst assimilation of all: How modern-day drag hurts trans women and achieves little or nothing of value. Why has drag escaped critique from feminists and the LGBTQ community? Moving Beyond “Lesbian Bed Death” And Bridging The Libido Gap. Okay, are y’all ready for the longest sex question I’ve ever answered? 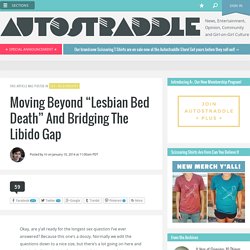 Because this one’s a doozy. Four Things Cis People Forget  I appreciate all the cis people in my life who have worked hard to learn about trans issues and become better allies to me and people like me. 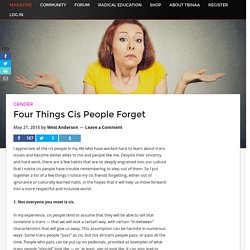 Despite their sincerity and hard work, there are a few habits that are so deeply engrained into our culture that I notice cis people have trouble remembering to step out of them. So I put together a list of a few things I notice my cis friends forgetting, either out of ignorance or culturally learned habit, in the hopes that it will help us move forward into a more respectful and inclusive world. 1. Not everyone you meet is cis. You Need Help: Two Bottoms, One Relationship. Feature image via shutterstock. Drag Culture Hurts the Transgender Community.

There has been a longstanding tension between the drag community and the transgender community. The most recent flare-up comes from RuPaul (again) for using the word "shemale" prominently in a contest on the sixth season premier episode of Drag Race. What makes this even more awkward is that GLAAD had been promoting this episode.

RuPaul has been problematic for the transgender community in the past when defending the use of the word "tranny," as well as saying that the only difference between a drag queen and a transsexual is "$25,000 and a good surgeon. " In all of these kerfuffles, though, the pushback against the transgender community is usually something along the lines of "you're being too sensitive," "you people can't take a joke," that some transgender people got a start in drag culture, or that drag culture is really a good thing because it challenges the gender binary. The trans community needs to understand its differences.

“Hurt people hurt people.” Laverne Cox quoted the line in her keynote address at the 2014 Trans 100 Live Event as she spoke to the need for healing in the community. For groups defined, at least in part, by shared experiences of oppression, there is an unspoken, perhaps even unconscious, belief in freedom from such oppression in spaces created or dominated by the community itself. Trans* Women Are Not Drag Queens. Gay Men Just Don't Understand Transwomen. Think trans women are simply gay men, who refuse to accept that they are gay.

So we take hormones and "mutilate" ourselves to mimic women and buy vaginas to justify having sex with a man. And some gay men go positively bonkers when they see trans women with handsome, worthwhile men. I remember reading where southern writer, William Faulkner-- author of such short stories as A ROSE FOR EMILY, DRY SEPTEMBER, to name a few--said that it was the responsibility of white people to bring black people along, to teach Negroes the importance of manners and education so they could comport themselves effectively and prosper in a democratic society. Ellen Degeneres Called 'Transphobic' After Liza Minnelli Oscars Joke. Whipping Girl: a few thoughts on drag, trans women, and subversivism. 5 things you NEED to know before you date a trans woman! — Gender 2.0. The Quiet Clash Between Transgender Women And Drag Queens.

Here's What Is (And Isn't) Working in Men's Work on College Campuses. 10 Things Trans Activists and Allies NEED to Remember That Have Nothing to Do With Caitlyn Jenner. In the last year, you’ve probably noticed the word transgender enter the vocabulary of folks you never expected: ABC News, Barilla Pasta, Rick Santorum, maybe even your grandma. 3 Ways White Cis Gay Men Can Do Better for the LGBTQIA+ Movement. Let’s get this out of the way right now: I am a white cisgender gay woman, and I love gay men.

13 Myths And Misconceptions About Trans Women. 5 Things Being in a Femme-Butch Relationship Has Taught Me About Privilege. A trans woman's reply to Germaine Greer. The Thinking Asexual. 30+ Examples of Cisgender Privilege. Obama Administration Supports Transgender Student In Federal Appeals Court. Silencing the Screaming Queens: Roland Emmerich's 'Stonewall' and the Erasure of Queer Rage