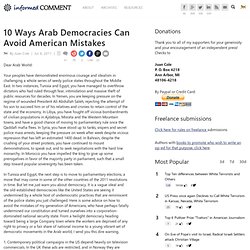 In two instances, Tunisia and Egypt, you have managed to overthrow dictators who had ruled through fear, intimidation and massive theft of public resources for decades. In Yemen, you are keeping pressure on the regime of wounded President Ali Abdullah Saleh, rejecting the attempt of his son to succeed him or of his relatives and cronies to retain control of the state and the economy. In Libya, you have fought off vicious bombardments of civilian populations in Ajdabiya, Misrata and the Western Mountain towns, and have a good chance of moving to parliamentary rule once the Qaddafi mafia flees. In Syria, you have stood up to tanks, snipers and secret police mass arrests, keeping the pressure on week after week despite vicious repression that has left an estimated 1400 dead. 1. 2. 3. 4. 5. 6. 7. 8. 9. 10.

1848 and 2011. The similarities between the revolutions in Tunisia and Egypt last spring and the ones in Europe in 1848 are striking. 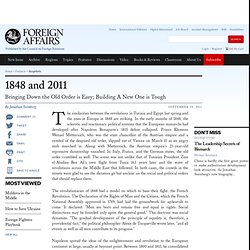 In the early months of 1848, the sclerotic and reactionary political systems that the European monarchs had developed after Napoleon Bonaparte's 1815 defeat collapsed. Prince Klemens Wenzel Metternich, who was the state chancellor of the Austrian empire and a symbol of the despised old order, slipped out of Vienna on March 15 as an angry mob marched in. Along with Metternich, the Austrian empire's 23-year-old repressive dictatorship vanished. In Italy, France, and the German states, the old order crumbled as well. Lessons in Reform. How Can Egypt Avoid the Fate of other Post-Revolutionary States? 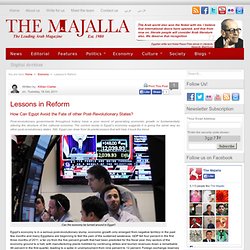 A Region Transformed? The Arab World after the Arab Awakenings Over a year since Tunisia’s awakening, the Arab World faces a critical juncture. 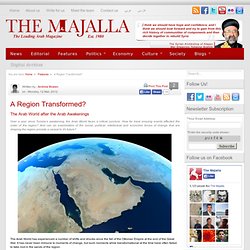 The Cynics at the Gates - By James Traub. Something big has happened in international diplomacy: The Arab League, a body which until just the other day defended the sovereignty of its members at all costs, is demanding that a skittish U.N. 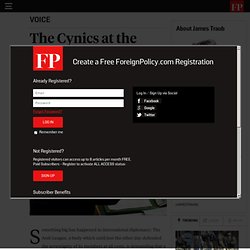 Security Council take forceful action to stop atrocities committed by Syria, one of its own members. The league's call last year for a no-fly zone to protect civilians in Libya felt like an aberration, because Muammar al-Qaddafi had placed himself so far beyond the pale among his own neighbors. But Syria is a pillar of the organization, as central as France is to the EU.

Arab leaders shouldn't kill their people? The Arab League is today considering the demand by the Syrian National Council, human rights organizations and a wide array of other actors that it freeze Syria's membership over its killing of civilians. 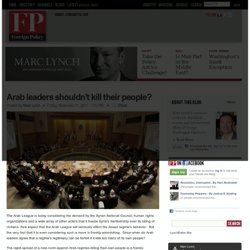 Few expect that the Arab League will seriously affect the Assad regime's behavior. But the very fact that it is even considering such a move is frankly astonishing. Since when do Arab leaders agree that a regime's legitimacy can be forfeit if it kills too many of its own people? The rapid spread of a new norm against Arab regimes killing their own people is a frankly astonishing, but largely unremarked, change in the regional game. What does History Teach Us about the Arab Revolutions. I've detected a growing tendency to issue obituaries for the "Arab spring. 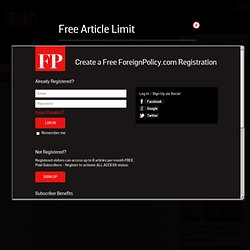 " This impulse is understandable given the relentless turmoil in Yemen, the brutal repression that continues in Syria, the simmering tensions in Libya and Bahrain, and the recent resurgence of sometimes violent protest against the military regime in Egypt. Not surprisingly, early hopes that the Arab world was at the dawn of a new era have been dashed-or at least diminished. And that's why pundits like Tom Friedman are now crossing their fingers and hoping for the reincarnation of Nelson Mandela in each of these states.

But if the history of revolutions tells us anything, it is that rebuilding new political orders is a protracted, difficult, and unpredictable process, and having a few Mandelas around is no guarantee of success. Tribes and Tribulations. Yemen’s tribal society is at odds with democratic reform Amidst the current political standoff in Yemen, hopes are rising that this can simply be a period of political transition during which Yemen can move towards a modern, democratic state. 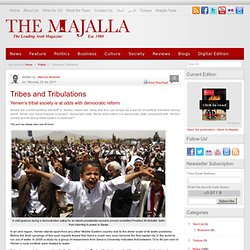 But to what extent is a democratic state compatible with Yemeni society and its strong tribal system in particular? This post has already been read 48 times! A child gestures during a demonstration calling for an interim presidential council to prevent embattled President Ali Abdullah Saleh from returning to power in Sanaa In an arid region, Yemen stands apart from any other Middle Eastern country due to the sheer scale of its water problems. Yet water was not always a problem for the Yemeni people. Al Qaeda's Challenge. Following the assassination of bin Laden and several of his most capable operatives in Afghanistan and Pakistan, al Qaeda has largely shifted its attention away from Central and South Asia to Somalia and Yemen. 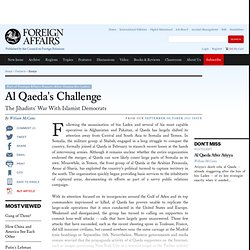 In Somalia, the militant group al Shabab, engaged in a long struggle to conquer the country, formally joined al Qaeda in February to staunch recent losses at the hands of intervening armies. Although it remains unclear whether the entire organization endorsed the merger, al Qaeda can now likely count large parts of Somalia as its own. Meanwhile, in Yemen, the front group of al Qaeda in the Arabian Peninsula, Ansar al-Sharia, has exploited the country’s political turmoil to capture territory in the south. The organization quickly began providing basic services to the inhabitants of captured areas, documenting its efforts as part of a savvy public relations campaign.

To continue reading, please log in. Don't have an account? Register Register now to get three articles each month. The Arab Uprisings. The press and the Arab spring: Six reasons for failure. The Arab Counterrevolution by Hussein Agha and Robert Malley. When the music’s over, turn out the lights. —Jim Morrison The Arab uprising that started in Tunisia and Egypt reached its climax on February 11, the day President Hosni Mubarak was forced to step down.

It was peaceful, homegrown, spontaneous, and seemingly unified. Lenin’s theory was turned on its head. The Russian leader postulated that a victorious revolution required a structured and disciplined political party, robust leadership, and a clear program. Since Mubarak’s ouster, everything that has happened in the region has offered a striking contrast with what came before. Amid rising insecurity and uncertainty there is fear and a sense of foreboding. Taking Stock. On : Monday, 16 Jan, 2012 Hearts and Minds The ideals of the Arab Spring have yet to be realized, but with greater enfranchisement of civilians in several countries the region is on the right track. Much has changed, but much has stayed the same in countries swept up in the events of the Arab Spring This weekend, Tunisia celebrated the one year anniversary of its revolution. Arab Justice for Arab Violence - Aryeh Neier. 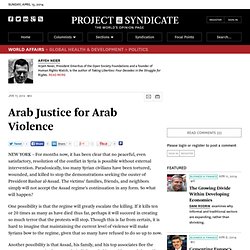 Click to hide this space NEW YORK – For months now, it has been clear that no peaceful, even satisfactory, resolution of the conflict in Syria is possible without external intervention. Paradoxically, too many Syrian civilians have been tortured, wounded, and killed to stop the demonstrations seeking the ouster of President Bashar al-Assad. The victims’ families, friends, and neighbors simply will not accept the Assad regime’s continuation in any form. So what will happen? Immunity, Accountability, and the Arab Uprisings: Jadaliyya Co-Editor Noura Erakat Discusses the Role of the Human Rights Community. On 14 February 2012, Jadaliyya Co-Editor Noura Erakat participated in an American University Law School's 2012 Founders' Celebration entitled "The Impact of the Arab Spring Throughout the Middle East and Northern Africa: Building the Rule of Law and the Role of the International Community in Domestic Conflicts.

" Noura was invited to speak on immunity in international law as it relates to the already deposed and prospectively deposed heads of state of several Arab countries. Her panel, "Protection in Practice: Intervention, Accountability, and the Role of the International Community in Domestic Conflicts," also addressed questions of the utility and normative value of external intervention in national conflicts.

Noura dedicated her comments to exploring whether or not the human rights community could advocate for human rights principles as a stand-alone concept, without taking into account the humans whose lives they are directly affecting. The Arab Spring’s Balance Sheet - Wadah Khanfar. Exit from comment view mode. Click to hide this space CAIRO – Last year’s events in Egypt and Tunisia drew the curtain on a tottering old order and delivered much of the Arab world into a long-awaited new era. But what that new era will look like remains very much an open question, given the many challenges that the region’s countries still face.

The cold choice — jobs or jihad. A League of their Own. Egypt Unwrapped. A League Apart. The Middle East Didn't Really Get Any Freer in 2011 - Max Fisher - International. The Arab Spring may be changing history, but a new report shows the dictators are taking almost as much as they're losing Anti-government protesters pray next to tanks during Friday prayers at Tahrir Square in Cairo / Reuters. A Forward Strategy of Freedom - By Elliott Abrams. Reading Mahfouz in Cairo. Republican Monarchies: A Decade On. Interview with Saad Eddin Ibrahim, one of Mubarak's most outspoken critics. Arab Spring or Islamist Winter? How the Islamists Took Power. Why did Moroccans, Tunisians, and Egyptians cast their hard-won vote in favor of religious parties? "The Maghreb’s Modern Islamists" by Moha Ennaji. Exit from comment view mode. Realism and the Arab Spring.

Writing the Revolution: Dilemmas of Ethnographic Writing after the January 25th Revolution in Egypt. Losing the Game. On Uprisings and Interventions: An Interview with Vijay Prashad. "Mind the Neighbors" by Anne-Marie Slaughter. The Arab Spring One Year On. Between hope and fear. Was the Arab Spring Worth It? - By Hussein Ibish. Plague of Thugs - By Christian Caryl.

The economics of the Arab Spring. Doyle McManus: Mosque and state. The Arab Storm. Writing Constitutions in the Wake of the Arab Spring. "A Post-Arab Spring Strategy" by Volker Perthes. "The Challenge of Islamic Finance" by Andrew Sheng and Ajit Singh. "Revolutionizing Arab Economies" by Sinan Ulgen. Egypt. Tunisia. The Arab Spring at One. The Invention of the Savage: Colonial Exhibitions and the Staging of the Arab Spring. The Arab Intellectuals Who Didn’t Roar. Islam Hussein: Role of Religion in Liberal Society. What do Arabs Want? - Mansoor Moaddel. Beyond Lawfare: Nonviolent Methods to Weaken Despotic Regimes. Political Islam and the US. Egyptian Foreign Policy After the Election. Yemen. Women of the Revolution - Al Majalla. For Young Women, A Horrifying Consequence Of Mubarak’s Overthrow.

How Egypt's Revolution Has Dialed Back Women's Rights. Saudi Women's Vote: Does it Go Far Enough? The Uprisings Will be Gendered. The suspicious revolution: an interview with Talal Asad.