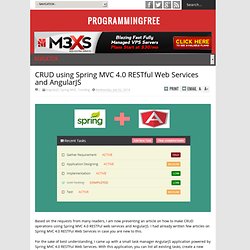 I had already written few articles on Spring MVC 4.0 RESTFul Web Services in case you are new to this. For the sake of best understanding, I came up with a small task manager AngularJS application powered by Spring MVC 4.0 RESTFul Web Services. With this application, you can list all existing tasks, create a new task, mark completion of an existing task and archive completed tasks. I had tried to keep it very simple as this is not for real time use but for the best understanding of the concept. Building Java Web Application Using Hibernate With Spring.

This post will show how to create a Student Enrollment Application using MYSQL DB with Hibernate ORM in a Spring environment. 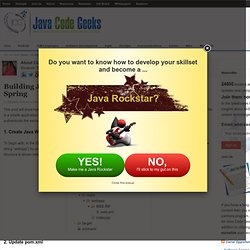 This is a simple application that aims to collect the input details from the user during signup, save the details in the MYSQL DB and authenticate the same during login. 1. Create Java Web Application Project using Maven Template To begin with, in the IDE, create a Java Maven project with the template of maven-archetype-webapp (Filter the catalog based on the string “webapp”) by providing appropriate values for GroupId and Artifact Id for the project. The sample web application directory structure is shown below with a standard deployment descriptor web.xml and Maven pom.xml 2. To make the above Maven Java Web Application project support the Hibernate ORM in Spring framework, add the following dependencies to the existing pom.xml 3. Modify the contents of the web.xml to include the following: A servlet and specify the location of the configuration file for the same. 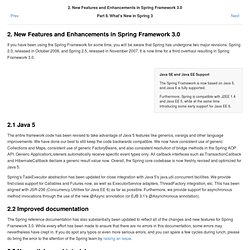 It is now time for a third overhaul resulting in Spring Framework 3.0. The entire framework code has been revised to take advantage of Java 5 features like generics, varargs and other language improvements. We have done our best to still keep the code backwards compatible. Desarrollando una aplicación Spring Framework MVC v3 + JPA paso a paso. Spring Framework Reference Documentation. Spring-best-practices/EtagGeneratorAspect.java at master · priyatam/spring-best-practices. Integration of Twitter Bootstrap Form and Spring MVC Framewok. Today we are going to learn how to integrate Twitter Bootstrap responsive web design framework with spring framework.Now a days everybody is crazy about responsive web design because mobile, tab users are growing day by day. 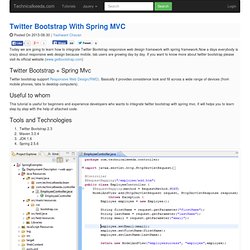 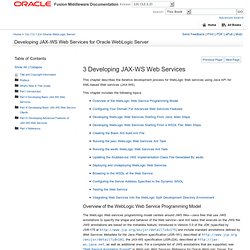 This chapter includes the following topics: Overview of the WebLogic Web Service Programming Model The WebLogic Web services programming model centers around JWS files—Java files that use JWS annotations to specify the shape and behavior of the Web service—and Ant tasks that execute on the JWS file. 5 Using JAXB Data Binding (12c Release 1 (12.1.2)) This chapter describes how to use Java Architecture for XML Binding (JAXB) data binding. 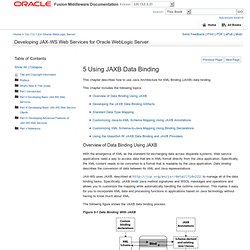 This chapter includes the following topics: Overview of Data Binding Using JAXB With the emergence of XML as the standard for exchanging data across disparate systems, Web service applications need a way to access data that are in XML format directly from the Java application. Specifically, the XML content needs to be converted to a format that is readable by the Java application. Data binding describes the conversion of data between its XML and Java representations. JAX-WS uses JAXB, described at to manage all of the data binding tasks. The following figure shows the JAXB data binding process. As shown in the previous figure, the JAXB data binding process consists of the following tasks: Bind—Binds XML Schema to schema-derived JAXB Java classes, or value classes. 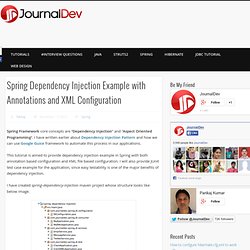 I have written earlier about Dependency Injection Pattern and how we can use Google Guice framework to automate this process in our applications. This tutorial is aimed to provide dependency injection example in Spring with both annotation based configuration and XML file based configuration. I will also provide JUnit test case example for the application, since easy testability is one of the major benefits of dependency injection. I have created spring-dependency-injection maven project whose structure looks like below image. Let’s look at each of the components one by one. CDI Dependency Injection - An Introductory Tutorial Part 1 - Java EE.

We Recommend These Resources CDI is the Java standard for dependency injection (DI) and interception (AOP). 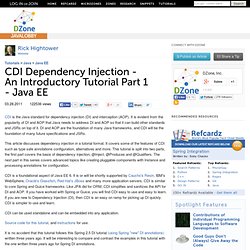 It is evident from the popularity of DI and AOP that Java needs to address DI and AOP so that it can build other standards and JSRs on top of it. DI and AOP are the foundation of many Java frameworks, and CDI will be the foundation of many future specifications and JSRs. This article discusses dependency injection in a tutorial format. It covers some of the features of CDI such as type safe annotations configuration, alternatives and more. JAXB. Copyright © 2008, 2009, 2010, 2011, 2012 Lars Vogel JAXB Tutorial This tutorial give an introduction to Java Architecture for XML Binding (JAXB). 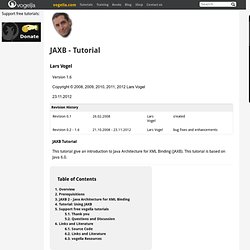 This tutorial is based on Java 6.0. Web Services: JAX-WS vs Spring. In my endless search for the best way to develop applications, I’ve recently been interested in web services in general and contract-first in particular. 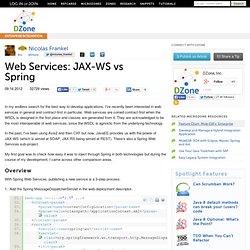 Web services are coined contract-first when the WSDL is designed in the first place and classes are generated from it. They are acknowledged to be the most interoperable of web services, since the WSDL is agnostic from the underlying technology. In the past, I’ve been using Axis2 and then CXF but now, JavaEE provides us with the power of JAX-WS (which is aimed at SOAP, JAX-RS being aimed at REST).

There’s also a Spring Web Services sub-project. My first goal was to check how easy it was to inject through Spring in both technologies but during the course of my development, I came across other comparison areas. Spring V.S. Java EE.

Getting Started · Building Java Projects with Gradle. The simple Hello World sample is completely self-contained and does not depend on any additional libraries. Most applications, however, depend on external libraries to handle common and/or complex functionality. For example, suppose that in addition to saying "Hello World! ", you want the application to print the current date and time. You could use the date and time facilities in the native Java libraries, but you can make things more interesting by using the Joda Time libraries. / - simple-samples - Simple Samples. SpringWebServices - vehicle-search-service-using-spring - A white paper on Spring Web Services usage and best practices - A test web service using spring ws. I would like to start out by stating that this paper does not intend to target audiences who want to learn Spring-WS, for that please use the Spring-WS reference document (link provided in references) which we feel has an excellent and in-depth material for your benefit.

On the contrary we expect the reader to have a basic idea of Spring and Web Services at least. This paper is a humble attempt to document useful information for day to day usage of Spring-WS. It starts out by providing a brief description and then moves on to provide some design guidance, state the Advantages, Limitations etc. Spring Web Services Tutorial. The project structure is similar to that used in a some of my other tutorials and is typical of most modern Spring web applications.

We'll start off by creating a simple Spring web project like the one shown in figure 1.0 below. There are two fundamental approaches to building web services, Contract Last and Contract First. The Contract Last approach involves taking existing code and generating a service contract directly from that code in order to expose it as a SOAP interface. There are a variety of Java frameworks out there (Axis2, XFire etc) that provide this Java2WSDL tooling, to quickly generate the server side proxies, marshallers and Servlet classes required to expose a SOAP service.

The Contract First approach involves defining the Service contract before implementing the service. Service Contract Definition Given that we're building a service to retrieve simple bank account details we'll start off by defining our core business entity, an Account. <? 1: <? 1: <? Step by step Spring-WS. Took a look at Spring-WS and came up with a quick example service to describe its use. I decided to build an 'echo' service. Send in a text and it will echo that back with a date and time appended to the text. Basic Spring Web Service Tutorial From Contract to Security. About the example I assume that you have already gone through Part 1 of spring web services documentation, especially the Chapter 3 of the reference. Simple Spring Web Services using JAXB for Marshalling. Chapter 3 Writing Contract-First Web Services. Spring-by-example/spring-by-example.