The Ultimate Guide to Worldwide Etiquette 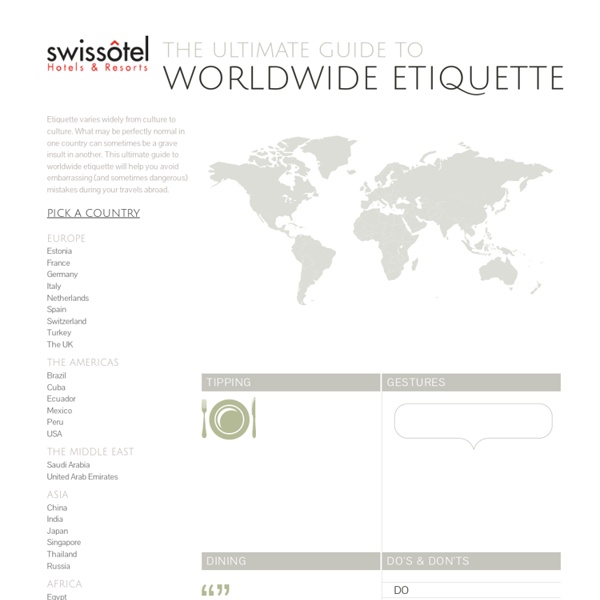 Power Causes Brain Damage - The Atlantic But tornadoes, volcanoes, and tsunamis aren’t the only hubris-restraining forces out there. PepsiCo CEO and Chairman Indra Nooyi sometimes tells the story of the day she got the news of her appointment to the company’s board, in 2001. She arrived home percolating in her own sense of importance and vitality, when her mother asked whether, before she delivered her “great news,” she would go out and get some milk. Cognitive dissonance In psychology, cognitive dissonance is the mental stress or discomfort experienced by an individual who holds two or more contradictory beliefs, ideas, or values at the same time, or is confronted by new information that conflicts with existing beliefs, ideas, or values.[1][2] Leon Festinger's theory of cognitive dissonance focuses on how humans strive for internal consistency. When inconsistency (dissonance) is experienced, individuals tend to become psychologically uncomfortable and they are motivated to attempt to reduce this dissonance, as well as actively avoiding situations and information which are likely to increase it.[1] Relationship between cognitions[edit] Individuals can adjust their attitudes or actions in various ways. Adjustments result in one of three relationships between two cognitions or between a cognition and a behavior.[1]

Richard Lewis Communications - Negotiating across Cultures “In all negotiations of difficulty, a man may not look to sow and reap at once; but must prepare business, and so ripen it by degrees” – Francis Bacon (1561-1626) ‘Of Negotiating’ Negotiation is probably as old as mankind itself and was born out of Homo Sapiens’ early struggles for survival and dominance. During the last century or so, negotiation has become a science, dominated by the Americans. But anyone who has mediated at, for instance, a Japanese-US joint venture knows that the moment intercultural factors enter the equation, the landscape can change utterly. It has always been advisable to understand the cultural factors in international negotiations. The first principles and values of the different parties can diverge widely, colouring the entire process.

Bananas and Monkeys Original source unknown. (But the story appears to have some basis in fact.) Start with a cage containing five monkeys. China If we explore the Chinese culture through the lens of the 6-D Model, we can get a good overview of the deep drivers of Chinese culture relative to other world cultures. Power distanceThis dimension deals with the fact that all individuals in societies are not equal – it expresses the attitude of the culture towards these inequalities amongst us. Power distance is defined as the extent to which the less powerful members of institutions and organisations within a country expect and accept that power is distributed unequally. At 80 China sits in the higher rankings of PDI – i.e. a society that believes that inequalities amongst people are acceptable. The subordinate-superior relationship tends to be polarized and there is no defense against power abuse by superiors.

Expanding Your Cultural Intelligence Quiz Your CQ can be as important as your IQ Few subjects are as massive and complex as culture. Here’s how the American Heritage English Dictionary leads off its definition of the term: “the totality of socially transmitted behavior patterns, arts, beliefs, institutions, and all other products of human work and thought.” The “all other products” qualifier would strain the resources of most anyone’s cultural quotient, or CQ, which global-competence researchers, Linn Van Dyne, Soon Ang and Christine Koh, interpret as an individual’s “capability to function effectively in situations characterized by cultural diversity.” Diversity, of course, at least according to the U.S. Department of the Interior, roundly refers to “many demographic variables, including, but not limited to, race, religion, color, gender, national origin, disability, sexual orientation, age,

Bloom’s Taxonomy Background Information | The Original Taxonomy | The Revised Taxonomy | Why Use Bloom’s Taxonomy? | Further Information The above graphic is released under a Creative Commons Attribution license. You’re free to share, reproduce, or otherwise use it, as long as you attribute it to the Vanderbilt University Center for Teaching. Cultural Detective Series Content/Packages Cultural Detective® helps you increase productivity, effectiveness, employee satisfaction and profits by building loyalty, teamwork and return on investment. Subscribe to Cultural Detective Online for immediate access to the most robust, process-based, interactive, theoretically-grounded global effectiveness tools available for achieving the results that intercultural competence can bring to your organization. Alternatively the Cultural Detective materials can be licensed as PDFs. Click here to learn what is included in a PDF package.