New Zealand weighs up a nation-sized battery. Ian Mason and Robert McLachlan Climate change was a small but perceptible part of the recent election. 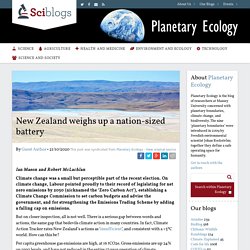 On climate change, Labour pointed proudly to their record of legislating for net zero emissions by 2050 (nicknamed the ‘Zero Carbon Act’), establishing a Climate Change Commission to set carbon budgets and advise the government, and for strengthening the Emissions Trading Scheme by adding a falling cap on emissions. But on closer inspection, all is not well. There is a serious gap between words and actions, the same gap that bedevils climate action in many countries. In fact, Climate Action Tracker rates New Zealand’s actions as ‘insufficient’, and consistent with a +3ºC world. Per capita greenhouse gas emissions are high, at 16 tCO2e. We often hear that New Zealand has a lot of renewable electricity. 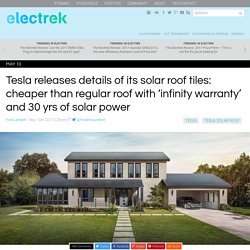 Of course, the most important information that people were waiting for is price. CEO Elon Musk first hinted that it would be cheaper than a regular roof after accounting for energy savings, and later said that Tesla’s solar roof could cost less than a regular roof – even before energy production. Tesla pretty much delivered on both depending on how you look at it. Japanese Floatovoltaics Plant Powers 5000 Homes. A 2.3-megwatt floating solar array in Kasai City, Japan. 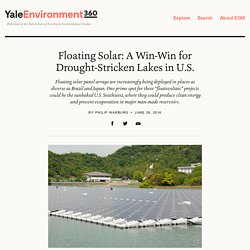 COURTESY OF KYOCERA CORPORATION The Colorado River’s two great reservoirs, Lake Mead and Lake Powell, are in retreat. Multi-year droughts and chronic overuse have taken their toll, to be sure, but vast quantities of water are also lost to evaporation. Indonesia Commissions 'World's Largest' Tidal Power Plant. The Indonesian government has approved a plan to build what has been billed as the world’s largest tidal power facility in the ecologically rich Indonesian island of Flores. 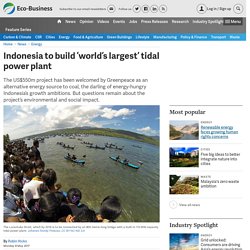 The new plant, known as the Palmerah Tidal Bridge, will be built into a floating 800 metre-long bridge on the Larantuka Strait in East Flores, and promises to deliver power capacity of 18 to 23 megawatts (MW), providing enough electricity for 100,000 people in the area. It is the first deal to emerge from a strategic hydropower alliance between the Indonesian and Dutch governments. A second phase of construction could see capacity increased to 90 to 115 MW, enough power for more than half a million Indonesians in a region that largely relies on polluting diesel generators for electricity.

Tesla Using More Batteries Than Produced Worldwide in 2013. Twenty miles east of Sparks, Nevada, a factory is rising from the red dirt of the high desert. 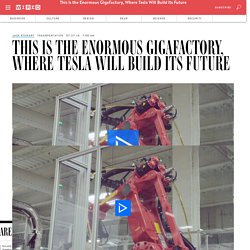 It doesn’t look like much—a few completed structures amid exposed steel girders—but this building, dubbed the Gigafactory, is the key to Elon Musk’s sweeping plan to remake transportation. The Gigafactory is where Tesla Motors will build the batteries that power its electric vehicles. The company has long imported batteries from Asia, but if it is to meet its CEO’s goal of producing 500,000 cars a year, it must build those batteries here. There’s simply no other way to meet its own demand, because the company expects to use more batteries in 2020 than were produced worldwide in 2013. “The factory is the machine that builds the machine,” Musk says, sitting in the lobby of his new building.

When finished, the Gigafactory will cover 5.8 million square feet. Click to Open Overlay Gallery. Global Grid-Tied Energy Storage Reaches 21GWh, Up From 2.9 GWh in 2016. PV Magazine A new report from GTM Research forecasts that the energy storage market in Germany will have an annual value exceeding USD1 billion by 2021, as a collection of factors feed the market’s growth within the country. 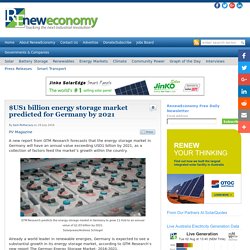 GTM Research predicts the energy storage market in Germany to grow 11-fold to an annual value of $1.03 billion by 2021.Solarpraxis/Andreas Schlegel Already a world leader in renewable energies, Germany is expected to see a substantial growth in its energy storage market, according to GTM Research’s new report The German Energy Storage Market: 2016-2021. First Fusion Electricity Generated. 6th May 2017 Fusion reactor achieves first plasma A British company, Tokamak Energy, has achieved first plasma in the ST40, its latest prototype design for a fusion reactor. 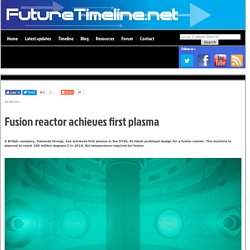 The machine is planned to reach 100 million degrees C in 2018, the temperature required for fusion. Credit: Tokamak Energy. Fusion Energy Delivered to Grid. Solar Generation up 14,000% in 15 Years. The annual potential of solar energy far exceeds the world’s energy consumption, but the goal of using the sun to provide a significant fraction of global electricity demand is far from being realized. 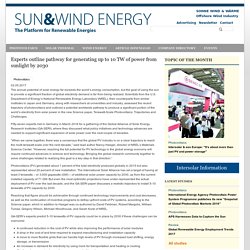 Scientists from the U.S. Department of Energy’s National Renewable Energy Laboratory (NREL), their counterparts from similar institutes in Japan and Germany, along with researchers at universities and industry, assessed the recent trajectory of photovoltaics and outlined a potential worldwide pathway to produce a significant portion of the world’s electricity from solar power in the new Science paper, Terawatt-Scale Photovoltaics: Trajectories and Challenges. 60% of Installed Capacity From Zero-Emission Sources.