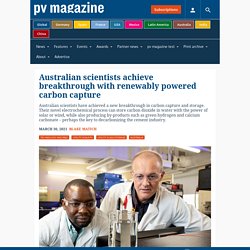 Their novel electrochemical process can store carbon dioxide in water with the power of solar or wind, while also producing by-products such as green hydrogen and calcium carbonate – perhaps the key to decarbonizing the cement industry. March 30, 2021Blake Matich. Startup Raises $9 Million for its New Method to Recycle CO2 into Protein-Rich Animal Feed. An agriculture feed startup has received $9.4 million in initial funding for its technology that produces pure protein from CO2. 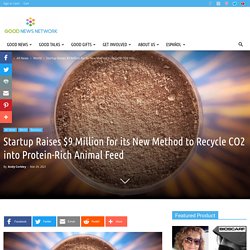 The protein would come from carbon dioxide generated by industrial exhaust, and would be combined with hydrogen to create scalable, cheap animal feed to replace soybeans—a major feed crop linked heavily with deforestation. Deep Branch combines some of the most basic chemical building blocks, present in everything from stars to skyscrapers—like carbon, oxygen, and hydrogen—inside a fermentation chamber where it produces high-value protein called “Proton.”

This Proton is then dried, mixed with other nutrients, and turned into pellets at a 90% CO2 savings rate compared to other feed sources. Cheaper Carbon Capture Is on the Way – Marathon Research Effort Drives Down Cost. This animation depicts the two-stage flash configuration, one of several processes described in a new study detailing how EEMPA, a Pacific Northwest National Laboratory-developed solvent, can capture carbon from flue gas emitted by power plants. 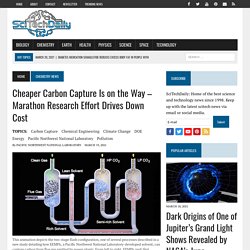 From left to right, EEMPA (red) first interacts with flue gas (black), where it absorbs carbon dioxide. Then, as a saturated solvent (blue), EEMPA is stripped of carbon dioxide in high and low-pressure tanks. Finally, the stripped solvent is reintroduced to the carbon dioxide absorber, where the process begins again. Hot electrons send carbon dioxide back to the future. Atmospheric carbon dioxide (CO2) is a major driver of global warming, but this gas could also serve as a valuable resource. 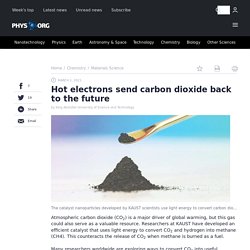 Researchers at KAUST have developed an efficient catalyst that uses light energy to convert CO2 and hydrogen into methane (CH4). This counteracts the release of CO2 when methane is burned as a fuel. Many researchers worldwide are exploring ways to convert CO2 into useful carbon-based chemicals, but their efforts have been limited by low efficiencies that restrict the potential for large-scale application. "Our approach is based on the synergistic combination of light and heat, known as the photothermal effect," says postdoc Diego Mateo. He explains that the heat is generated by the interaction of light with the catalyst, so the two forms of energy come from absorbed light. Novel photocatalyst effectively turns carbon dioxide into methane fuel with light.

Carbon dioxide (CO2) is one of the major greenhouse gases causing global warming. 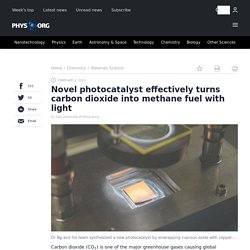 If carbon dioxide could be converted into energy, it would be killing two birds with one stone in addressing environmental issues. A joint research team led by City University of Hong Kong (CityU) has developed a new photocatalyst which can produce methane fuel (CH4) selectively and effectively from carbon dioxide using sunlight. According to their research, the quantity of methane produced was almost doubled in the first 8 hours of the reaction process.

The research was led by Dr. Ng Yun-hau, Associate Professor in the School of Energy and Environment (SEE), in collaboration with researchers from Australia, Malaysia and the United Kingdom. Compressed air storage to be more than just hot air in Israel. Solar-linked projects will be developed by domestic firm Augwind and will feature underground storage tanks. 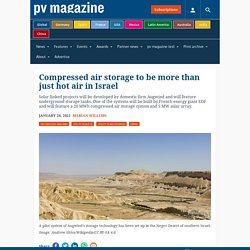 One of the systems will be built by French energy giant EDF and will feature a 20 MWh compressed air storage system and 5 MW solar array. January 26, 2021Marian Willuhn. Engineers have built machines to scrub CO2 from the air – and it could halt climate change. On Wednesday this week, the concentration of carbon dioxide in the atmosphere was measured at at 415 parts per million (ppm). 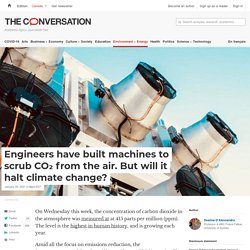 The level is the highest in human history, and is growing each year. Amid all the focus on emissions reduction, the Intergovernmental Panel on Climate Change (IPCC) says it will not be enough to avoid dangerous levels of global warming. The world must actively remove historical CO₂ already in the atmosphere - a process often described as “negative emissions”. Green ammonia breakthrough a potential boon for solar-powered exports. Scientists from the University of New South Wales and the University of Sydney have made a breakthrough in the development of green ammonia. 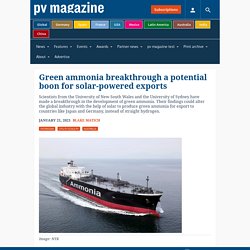 Their findings could alter the global industry with the help of solar to produce green ammonia for export to countries like Japan and Germany, instead of straight hydrogen. January 21, 2021Blake Matich. How whales help cool the Earth - BBC Future. Biogenic Iron Dust: A Novel Approach to Ocean Iron Fertilization as a Means of Large Scale Removal of Carbon Dioxide From the Atmosphere. Global emissions for the major greenhouse gas (GHG) carbon dioxide (CO2) accounted for 36.8 Gt CO2/year (2017 data) released to the atmosphere, and are projected to increase by another 2.7% in 2018 (Le Quéré et al., 2018). 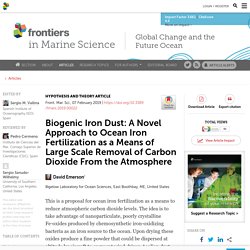 To limit an increase of Earth's surface temperature to <2°C by the end of the twenty-first century, the International Panel on Climate Change (IPCC) recommends that GHG emissions be reduced by 45% by 2050, with continuing reductions throughout the remainder of the twenty-first century (Moomaw et al., 2011). The large majority (>90%) of the possible scenarios outlined by IPCC to hold atmospheric CO2 to levels consistent with a ≤2°C temperature increase require some type of active removal of CO2 from the atmosphere (Fuss et al., 2014). A recent UNEP report found that to meet the 2°C requirement will require removal of an additional 12 −14 Gt of carbon from the atmosphere, primarily through CO2 removal (CDR) technologies (UNEP, 2016). Figure 1. Table 1. Table 2. 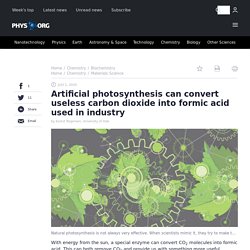 This can both remove CO2 and provide us with something more useful. The photosynthesis of plants is one of nature's many wonders. Using the energy of the sunlight, carbon dioxide (CO2) and water are converted into sugar and other carbohydrates, as well as oxygen. New process more efficiently recycles excess carbon dioxide into fuel, study finds. For years, researchers have worked to repurpose excess atmospheric carbon dioxide into new chemicals, fuels and other products traditionally made from hydrocarbons harvested from fossil fuels.

The recent push to mitigate the climactic effects of greenhouse gases in the atmosphere has chemists on their toes to find the most efficient means possible. A new study introduces an electrochemical reaction, enhanced by polymers, to improve CO2-to-ethylene conversion efficiency over previous attempts. The results of the study led by University of Illinois Urbana-Champaign chemistry professor Andrew Gewirth and graduate student Xinyi (Stephanie) Chen are published in the journal Natural Catalysis. Allowing CO2 gas to flow through a reaction chamber fitted with copper electrodes and an electrolyte solution is the most common method researchers use to convert CO2 to useful carbon-containing chemicals, the study reports. This document is subject to copyright. Researchers Pull Carbon Out of the Sky And Convert it to Instant Jet Fuel, Reshaping Aviation For Good. A simple, yet world-altering method of sucking CO2 from the air into airplanes where it is converted directly to jet fuel is described in a new paper published in Nature.

With the importance of removing greenhouse gases from the atmosphere at the front and center of so many economic and policy decisions, the invention of an onboard system for carbon-neutral flight would represent a massive step towards addressing the climate crisis. Some estimates puts the aviation industry’s primarily-CO2 footprint of global emissions at just under 1 billion metric tons, or around 2.4% of all human activities. Converting atmospheric CO2 into useable hydrocarbon fuel is difficult, and as until recently, expensive both in terms of capital and electricity.

Unlike cars, planes can’t carry batteries big enough to run on electricity from wind or solar power. But if CO2, rather than oil, were used to make jet fuel, that could reduce the air travel industry’s carbon footprint — which currently makes up 12 percent of all transportation-related CO2 emissions. Oxygen and carbon monoxide electrocatalysis for renewable-energy conversion. Scientists Turn Carbon Dioxide Into Ethanol. Jose A. New catalyst rearranges carbon dioxide and water into ethanol fuel. Researchers at the US Dept of Energy's Argonne National Laboratory, working with Northern Illinois University, have discovered a new catalyst that can convert carbon dioxide and water into ethanol with "very high energy efficiency, high selectivity for the desired final product and low cost.

" The catalyst is made of atomically dispersed copper on a carbon-powder support, and acts as an electrocatalyst, sitting in a low voltage electric field as water and carbon dioxide are passed over it. The reaction breaks down these molecules, then selectively rearranges them into ethanol with an electrocatalytic selectivity, or "Faradaic efficiency" higher than 90%. The team says this is "much higher than any other reported process. " Once the ethanol is created, it can be used as a fuel additive, or as an intermediate product in the chemical, pharmaceutical and cosmetics industries. There's no way of telling at this stage what the costs might be, either.

Ammonia—a renewable fuel made from sun, air, and water—could power the globe without carbon. SYDNEY, BRISBANE, AND MELBOURNE, AUSTRALIA—The ancient, arid landscapes of Australia are fertile ground for new growth, says Douglas MacFarlane, a chemist at Monash University in suburban Melbourne: vast forests of windmills and solar panels. More sunlight per square meter strikes the country than just about any other, and powerful winds buffet its south and west coasts. All told, Australia boasts a renewable energy potential of 25,000 gigawatts, one of the highest in the world and about four times the planet's installed electricity production capacity. Yet with a small population and few ways to store or export the energy, its renewable bounty is largely untapped.

That's where MacFarlane comes in. Ammonia—a renewable fuel made from sun, air, and water—could power the globe without carbon. Recycling Combustion: Creating Fuel From Carbon Dioxide. Microorganisms Convert Renewable Electricity into Carbon-Neutral Methane. Post-doctoral fellow Svenja Lohner, left, and Professor Alfred Spormann. Their research, along with the work of others, could help solve one of the biggest challenges for large-scale renewable energy: What to do with surplus electricity generated by photovoltaic power stations and wind farms.

L.A. Cicero Taking a “greener” approach to methane production, scientists from Stanford and Pennsylvania State are raising colonies of microorganisms, called methanogens, which have the ability to turn electrical energy into pure methane in microbial process that is carbon neutral. How carbon-sucking machines could cut aviation emissions. Engineers find neat way to turn waste carbon dioxide into useful material. Use of genetic algorithm helping to find the best carbon dioxide sponge. (Phys.org)—A team of researchers with the University of Ottawa has found that an algorithm used in genetic research has proven to be useful in helping to narrow down the number of possible carbon dioxide sponges, aka, metallic-organic frameworks(MOFs) for possible use in industrial applications. In their paper published in the journal Science Advances, the team describes how they used the algorithm, what it helped them find and what still needs to be done to figure out if the MOFs they isolated might actually be used some day to capture carbon dioxide from coal burning plants before it is emitted into the atmosphere.