Tesla Files Patents for Million Mile Battery. Editor’s Note: In “Moving to a Finite Earth Economy” we discuss a broad spectrum of technologies (existing and in development) that will be necessary to reduce and eliminate (and drawdown) GHG emissions. 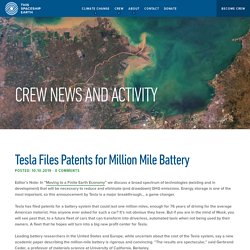 Energy storage is one of the most important, so this announcement by Tesla is a major breakthrough… a game changer. Tesla has filed patents for a battery system that could last one million miles, enough for 76 years of driving for the average American motorist. ‘World First’, Ultra-Cheap Printable Solar Panels Launched in Australia. As expected as the emphasis on non-carbon energy gains momentum new breakthroughs are coming more frequently and the entire field is morphing into the next level of cost and efficiency. 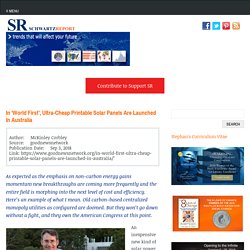 Here’s an example of what I mean. Old carbon-based centralized monopoly utilities as configured are doomed. But they won’t go down without a fight, and they own the American Congress at this point. New Record Efficiency for Organic Photovoltaics. Energy-Density Milestone for Next-Gen Solid-State Batteries. European Energy Firms Test Blockchain-Based P2P Trading. Press Release: European Energy Trading Firms test peer-to-peer Trading over the Blockchain Hamburg, May 29, 2017 23 [as of July 14: 28] European energy trading firms have joined forces in order to conduct peer-to-peer trading in the wholesale energy market using innovative blockchain technology. 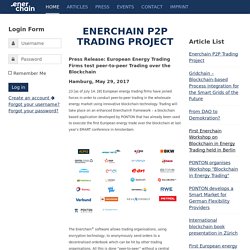 Trading will take place on an enhanced Enerchain® framework – a blockchain based application developed by PONTON that has already been used to execute the first European energy trade over the blockchain at last year’s EMART conference in Amsterdam. The Enerchain® software allows trading organisations, using encryption technology, to anonymously send orders to a decentralised orderbook which can be hit by other trading organisations. All this is done “peer-to-peer” without a central marketplace operated by a third party. Enerchain® is powered by Tendermint, the leading open source blockchain engine. The proof of concept will run until the end of 2017. China Commissions World's Largest 'Floatovoltaic' Facility. 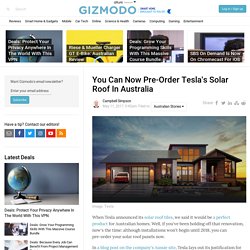 Well, if you've been holding off that renovation, now's the time: although installations won't begin until 2018, you can pre-order your solar roof panels now. In a blog post on the company's Aussie site, Tesla lays out its justification for why you should put a solar roof on your house. You'll have your own power source and energy self-sufficiency, your roof will be stronger, and over time — with power cost savings taken into account — it won't be any more expensive than a normal roof.

That's in the US, at least — we're doing our own analysis of the costs of how Tesla's solar shingles fit into the Australian roofing market. (Stay tuned for that.) US Consumer Reports pegs the price of a Tesla solar roof at around $US21.85 per square foot. If you hook those solar tiles up to a Powerwall, too, you'll be storing that generated electricity to use later when the sun is not shining. Li-Ion Battery Inventor Patents Fast-Charging, Noncombustible Battery. Battery Could Store 10X the Energy of Current Designs.

Researchers have struggled for decades to safely use powerful—but flammable—lithium metal in a battery. 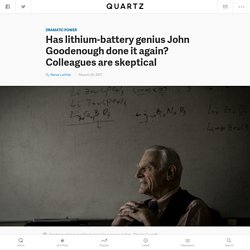 Now John Goodenough, the 94-year-old father of the lithium-ion battery, is claiming a novel solution as a blockbuster advance. If it proves out, the invention could allow electric cars to compete with conventional vehicles on sticker price. The improbable solution, described in a new paper from Goodenough and three co-authors, has drawn intense interest from leading science and technology publications. He estimates that the solution could store five to ten times as much energy as current standard lithium-ion batteries.

That’s enough to have Google’s Eric Schmidt tweeting about it. However, other leading battery researchers are skeptical, even mystified, by Goodenough’s claim. Goodenough’s long career has defined the modern battery industry. Goodenough did not respond to emails. Goodenough towers over the battery world Still, the paper has baffled battery researchers. Solid electrolytes open doors to solid-state batteries. Japanese scientists have synthesized two crystal materials that show great promise as solid electrolytes. 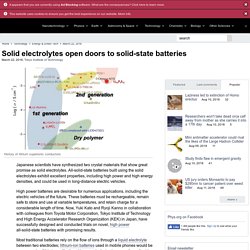 All-solid-state batteries built using the solid electrolytes exhibit excellent properties, including high power and high energy densities, and could be used in long-distance electric vehicles. High power batteries are desirable for numerous applications, including the electric vehicles of the future. These batteries must be rechargeable, remain safe to store and use at variable temperatures, and retain charge for a considerable length of time. Now, Yuki Kato and Ryoji Kanno in collaboration with colleagues from Toyota Motor Corporation, Tokyo Institute of Technology and High Energy Accelerator Research Organization (KEK) in Japan, have successfully designed and conducted trials on novel, high power all-solid-state batteries with promising results. 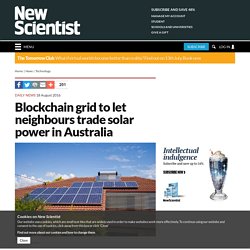 On 25 August, a group of neighbours will test a system to trade excess energy from solar panels between themselves using a blockchain to record the transactions. Run by local start-up PowerLedger, the trial at a retirement village in the city of Busselton, Western Australia, is another sign of the energy industry’s growing curiosity about the technology. Silicon-Air Battery Achieves Running Time of Over 1,000 hrs For The First Time. Silicon-air batteries are viewed as a promising and cost-effective alternative to current energy storage technology.

However, they have thus far only achieved relatively short running times. Jülich researchers have now discovered why. First US Offshore Wind Farm Commissioned. Shetland's World-Leading Tidal Power Breakthrough. A power company in Shetland has claimed a breakthrough in the race to develop viable offshore tidal stations after successfully feeding electricity to local homes. 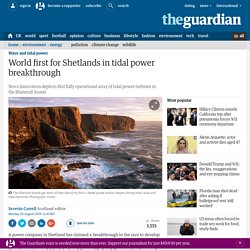 Nova Innovation said it had deployed the world’s first fully operational array of tidal power turbines in the Bluemull Sound between the islands of Unst and Yell in the north of Shetland, where the North Sea meets the Atlantic. It switched on the second of five 100kW turbines due to be installed in the sound this month, sending electricity on a commercial basis into Shetland’s local grid. Existing tidal schemes use single power plants or installations rather than a chain of separate turbines. A French company, OpenHydro, says it too is very close to linking two tidal machines, off Brittany, to build a more powerful 1MW array. Shetland has also been the site of one of the UK’s most bitter disputes over renewable power.

Nova Innovation said the two turbines installed so far were operating at 40% of their installed capacity.