Mayflower Autonomous Ship. The Extraordinary Link Between Deep Neural Networks and the Nature of the Universe. In the last couple of years, deep learning techniques have transformed the world of artificial intelligence. 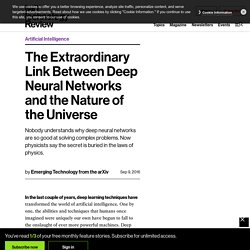 One by one, the abilities and techniques that humans once imagined were uniquely our own have begun to fall to the onslaught of ever more powerful machines. Deep neural networks are now better than humans at tasks such as face recognition and object recognition. They’ve mastered the ancient game of Go and thrashed the best human players. But there is a problem. Machines That Learn Language More Like Kids Do. Children learn language by observing their environment, listening to the people around them, and connecting the dots between what they see and hear. 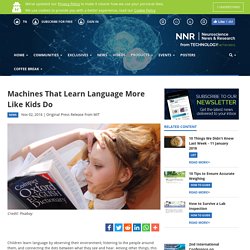 Among other things, this helps children establish their language’s word order, such as where subjects and verbs fall in a sentence. In computing, learning language is the task of syntactic and semantic parsers. These systems are trained on sentences annotated by humans that describe the structure and meaning behind words. Parsers are becoming increasingly important for web searches, natural-language database querying, and voice-recognition systems such as Alexa and Siri. Soon, they may also be used for home robotics. But gathering the annotation data can be time-consuming and difficult for less common languages. This “weakly supervised” approach — meaning it requires limited training data — mimics how children can observe the world around them and learn language, without anyone providing direct context. Le Machine Learning expliqué avec du chocolat – N26 Magazine - Édition française.

Best of arXiv.org for AI, Machine Learning, and Deep Learning – July 2018. In this recurring monthly feature, we filter recent research papers appearing on the arXiv.org preprint server for compelling subjects relating to AI, machine learning and deep learning – from disciplines including statistics, mathematics and computer science – and provide you with a useful “best of” list for the past month. 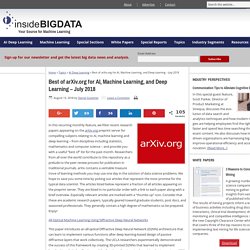 Researchers from all over the world contribute to this repository as a prelude to the peer review process for publication in traditional journals. arXiv contains a veritable treasure trove of learning methods you may use one day in the solution of data science problems. We hope to save you some time by picking out articles that represent the most promise for the typical data scientist. The articles listed below represent a fraction of all articles appearing on the preprint server. They are listed in no particular order with a link to each paper along with a brief overview. Quantum physics boosts artificial intelligence methods. Both the CMS (pictured here) and ATLAS experiments at the Large Hadron Collider discovered the Higgs boson. 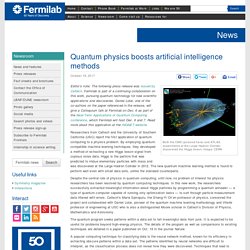 Image: CERN Editor’s note: The following press release was issued by Caltech. Fermilab is part of a continuing collaboration on this work, pursuing quantum technology for new scientific applications and discoveries. Daniel Lidar, one of the co-authors on the paper referenced in the release, will give a Colloquium talk at Fermilab on Dec. 6 as part of the Near-Term Applications of Quantum Computing conference, which Fermilab will host Dec. 6 and 7. Read more about this application at the INQNET website. Researchers from Caltech and the University of Southern California (USC) report the first application of quantum computing to a physics problem. Machine learning will change jobs—impact on economy could surpass that of previous AI applications.

Machine learning computer systems, which get better with experience, are poised to transform the economy much as steam engines and electricity have in the past. 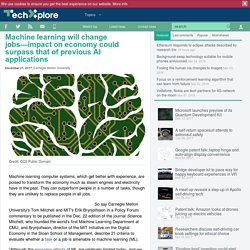 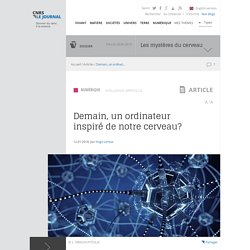 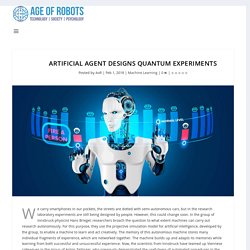 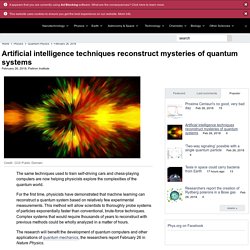 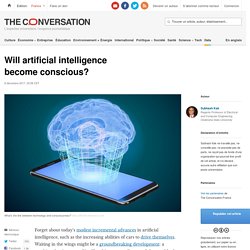 Waiting in the wings might be a groundbreaking development: a machine that is aware of itself and its surroundings, and that could take in and process massive amounts of data in real time. It could be sent on dangerous missions, into space or combat. Lancement d’une consultation publique sur l’intelligence artificielle par Cédric Villani. Dans le cadre de sa mission consacrée à l’intelligence artificielle, Cédric Villani remettra son rapport fin janvier. 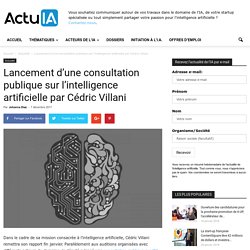 Parallèlement aux auditions organisées avec différents acteurs du domaine, le député a lancé une consultation publique sur l’IA afin que le grand public puisse se prononcer. A New Black Metal Album Was Just Published — and It Wasn't Made by a Human. Cracking the world famous Enigma Machine with artificial intelligence in just 13 minutes. Will artificial intelligence become conscious? Subhash Kak, Oklahoma State University Forget about today’s modest incremental advances in artificial intelligence, such as the increasing abilities of cars to drive themselves. Waiting in the wings might be a groundbreaking development: a machine that is aware of itself and its surroundings, and that could take in and process massive amounts of data in real time. It could be sent on dangerous missions, into space or combat.

We Just Created an Artificial Synapse That Can Learn Autonomously. In Brief A team of researchers has developed artificial synapses that are capable of learning autonomously and can improve how fast artificial neural networks learn. Mimicking the Brain Developments and advances in artificial intelligence (AI) have been due in large part to technologies that mimic how the human brain works. Coditany of Timeness. Machine Learning avec MATLAB - Facebook. Ahmed BESBES - Data Science Portfolio – Understanding deep Convolutional Neural Networks with a practical use-case in Tensorflow and Keras. As you can see, we have a variety of images. They all are in different resolutions. Cats and dogs are in different shapes, positions, colors. Using Machine Learning to Explore Neural Network Architecture. Posted by Quoc Le & Barret Zoph, Research Scientists, Google Brain team At Google, we have successfully applied deep learning models to many applications, from image recognition to speech recognition to machine translation.

Typically, our machine learning models are painstakingly designed by a team of engineers and scientists. Peter Diamandis Thinks We're Evolving Toward "Meta-Intelligence" From Natural Selection to Intelligent Direction In the next 30 years, humanity is in for a transformation the likes of which we’ve never seen before—and XPRIZE Foundation founder and chairman Peter Diamandis believes that this will give birth to a new species. Diamandis admits that this might sound too far out there for most people. Gluon -API for Deeplearning – Maheshwar Ligade. Amazon Web Services and Microsoft’s AI and Research Group this morning announced a new open-source deep learning interface called Gluon, jointly developed by the companies to let developers “prototype, build, train and deploy sophisticated machine learning models for the cloud, devices at the edge and mobile apps,” according to an announcement.

There are three kinds of consciousness, and computers have mastered one, says study.