Most Beautiful Forests in The World 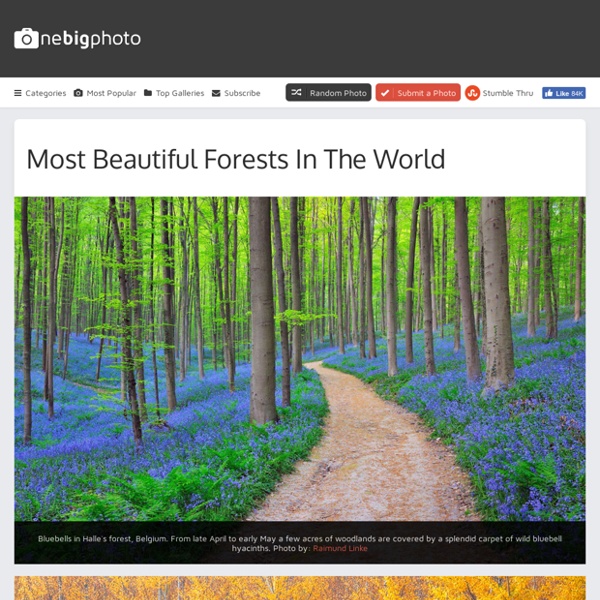 Ashikaga Flower Park, Japan The Japanese love flowers, and wisteria are among their favorites. Wisteria (known as fuji in Japan) is said to be one of the archipelago's most ancient noted flowering trees, even being described in the collected poems of the Man'yoshu (Collection of Ten Thousand Leaves). One of the best places to view fuji flowers is the Ashikaga Flower Park in Ashikaga City, Tochigi Prefecture. Abandoned Russian tunnels where mind-bending patterns naturally cover every surface By Sara Malm Published: 15:56 GMT, 5 February 2014 | Updated: 18:18 GMT, 5 February 2014 Hundreds of feet below a Russian city is an abandoned salt mine which might as well be the inside of a rave. The walls are covered with psychedelic patterns, caused by the natural layers of mineral carnallite creating swirls throughout the coloured rock. Carnallite is used in the process of plant fertilisation, and is most often yellow to white or reddish, but can sometimes be blue or even completely colourless.

Pseudanthium "Flower head" redirects here. For the band, see Flowerhead. What appear to be "petals" of an individual flower, are actually each individual complete ray flowers, and at the center is a dense pack of individual tiny disc flowers. Because the collection has the overall appearance of a single flower, the collection of flowers in the head of this sunflower is called a pseudanthium. A pseudanthium (Greek for "false flower") or flower head is a special type of inflorescence,[1] in which anything from a small cluster to hundreds or sometimes thousands of flowers are grouped together to form a single flower-like structure. Pseudanthia take various forms.

Best Camera Settings for Landscape Photography Last Updated: March 9, 2018 Don't miss stories. Follow PhotographyTalk Pictures of Clouds and Sunsets - What a Wonderful World Long’s Peak – Sunset Pictures of Clouds and Sunsets credit: David Evenson These pictures of clouds, nature and landscape are really inspirational. Clouds are created when rising air, through expansion, cools to the point where some of the water vapor molecules “clump together” faster than they are torn apart by their thermal energy. Some of that (invisible) water vapor condenses to form (visible) cloud droplets or ice crystals. After cloud droplets form, one of two things happen. Either they collide with each other and grow by joining together to such a large size that they fall to the ground as rain or snow, or they evaporate and change back into water vapor.

Conium maculatum poisonous herb in the carrot family A 19th-century illustration of C. maculatum Conium maculatum, the hemlock or poison hemlock, is a highly poisonous biennial herbaceous flowering plant in the carrot family Apiaceae, native to Europe and North Africa. A hardy plant capable of living in a variety of environments, hemlock is widely naturalized in locations outside its native range, such as parts of North and South America, Australia and West Asia, to which it has been introduced. 5 Advanced Landscape Photography Tips Most of the time, landscape photography tips are intended for beginners rather than advanced photographers. That’s a problem — it says to advanced photographers that there is nothing new to discover. But landscape photography is incredibly complex, and there are still techniques out there for everyone. This article goes through some of the most important. If you’re an advanced photographer, and you’re not sure what else there is to improve, my hope is that this will be a good start.

Why manchineel might be Earth's most dangerous tree The manchineel tree may be endangered, but so is anyone who messes with it. That's because this rare tropical plant, which offers deceptively sweet fruit, is one of the most poisonous trees on Earth. Manchineels are notorious in their native habitats, the sandy soils and mangroves of South Florida, the Caribbean, Central America and northern South America. Many are labeled with warning signs like the one pictured below.

15 Helpful Landscape Photography Tips for Beginners Everyone loves shooting landscape photos, right? OK, maybe not everyone, but what's not to love? Landscape photography gets you out of the everyday busyness of life and into the stillness of our wide open and wild spaces.