Social media & the effects of technology

Eslbrains - TikTok and other social media: fun or threat? This is a Flipped Classroom lesson plan. 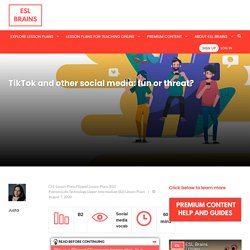 In a nutshell, it means that first part of the lesson needs to be done by students at home. Learn more about flipped classroom and how we implement it in those lesson plans in our post. This flipped lesson plan on social media touches upon a new kid on the block – TikTok. The worksheet will introduce students to the world of different social media sites as well as draw their attention to some concerns over the use of such sites. On top of that, your students will learn some useful words and phrases related to social media. Eslbrains - Txtng is killing language. JK!!! This lesson plan is based on a very interesting speech titled “Txtng is killing language. 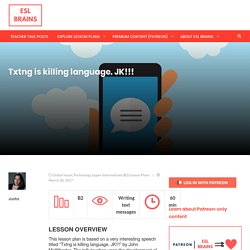 JK!!!” By John McWhorter. The talk touches upon the development of language, especially in terms of SMS. Moreover, students have a lot of opportunities to practise writing text messages in English. The worksheet includes many various exercises. Next three exercises are very practical. The speech lasts for about 13 minutes, so you can easily watch it during the lesson, which then should take you around 60 minutes. Extra Worksheet – Internet slang words and acronyms You can enrich this lesson by adding words and phrases that are used online in social media or instant messaging. See our other lesson plans with colloquial language Like this: Like Loading... Other posts Filter Bubbles (Internet vocabulary) Eslbrains - The smartphone problem. Let’s face it. We’re all addicted to our smartphones and other tech gadgets that supposedly make our lives easier. Therefore, this video lesson plan titled What Smartphone Addiction Does to Your Brain focus on that issue.

As part of this ESL worksheet, students can discuss their own experience with smartphones, consequences of their usage and use various structures for expressing preference. To help students express their ideas connected with addiction, there is a word-building task at the beginning of the worksheet. First, students need to come up with the correct forms from such words as addict, obsess, harm and bore. 5 Ways Social Media Is Changing Your Brain. Sherry Turkle: Connected, but alone? Should mobile phones be banned in schools? We asked five experts. NSW Minister for Education Rob Stokes has ordered a review into phone use in schools. 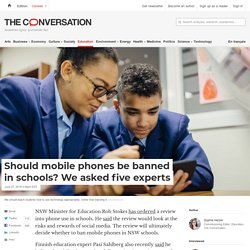 He said the review would look at the risks and rewards of social media. The review will ultimately decide whether to ban mobile phones in NSW schools. Finnish education expert Pasi Sahlberg also recently said he believed mobile phone-related distraction is a main reason for Australia sliding down in PISA rankings. Parents and teachers have similar concerns about cyberbullying and safety, as well as technology distracting from schoolwork. But do the benefits of having phones in classrooms (such as contact with parents, access to mental health text lines, and learning opportunities) outweigh the risks? We asked five experts if schools should ban mobile phones in classrooms. The first generations of 'digi kids' are struggling with literacy as experts warn against screen time. Updated 20 Nov 2019, 7:04amWed 20 Nov 2019, 7:04am Leading educators, academics and teachers are sounding the alarm over the impact excessive screen time is having on Australian children's reading, writing and ability to concentrate in school. 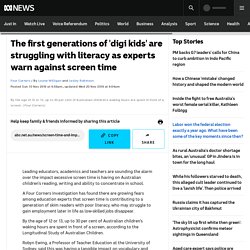 A Four Corners investigation has found there are growing fears among education experts that screen time is contributing to a generation of skim readers with poor literacy, who may struggle to gain employment later in life as low-skilled jobs disappear. By the age of 12 or 13, up to 30 per cent of Australian children's waking hours are spent in front of a screen, according to the Longitudinal Study of Australian Children. Robyn Ewing, a Professor of Teacher Education at the University of Sydney, said this was having a tangible impact on vocabulary and literacy.

Four Corners gained exclusive access to the initial results of a national survey of 1,000 teachers and principals conducted by the Gonski Institute. If you can read this headline, you can read a novel. Here's how to ignore your phone and just do it. Public anxiety about the capacity of digital-age children and young adults to read anything longer than a screen grab has come to feel like moral panic. 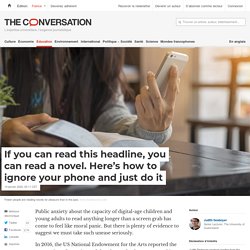 But there is plenty of evidence to suggest we must take such unease seriously. In 2016, the US National Endowment for the Arts reported the proportion of American adults who read at least one novel in 2015 had dropped to 43.1% from 56.9% in 1982. In 2018, a US academic reported that in 1980, 60% of 18-year-old school students read a book, newspaper or magazine every day that wasn’t assigned for school.

By 2016, the number had plummeted to 16%. Dotty – Film English. This EFL lesson is designed around a moving short film by Brett and Mick , and the themes of texting and elderly people. 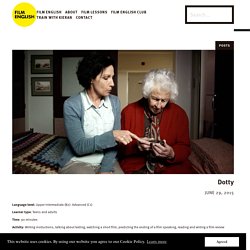 Students discuss texting, write instructions, predict how a short film ends, read a film review and write a film review for homework. Step 1 Put your students in pairs and ask them to discuss the following questions: How many texts messages do you send a day?