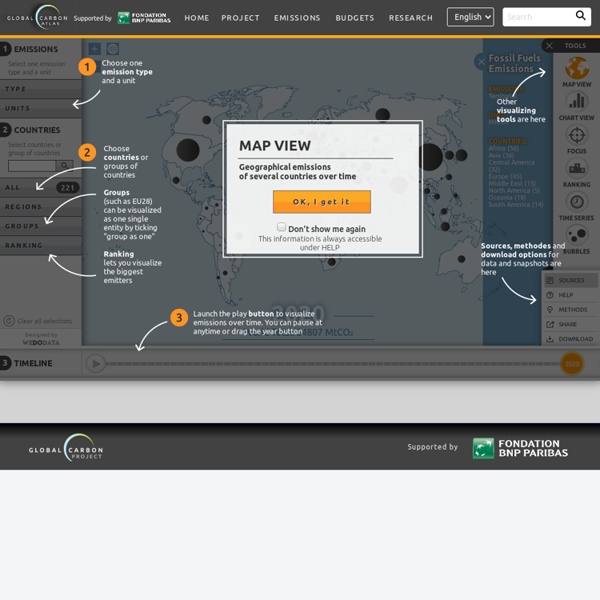 World Migration Map - Data Visualization by Metrocosm This map shows the estimated net immigration (inflows minus outflows) by origin and destination country between 2010 and 2015. Blue circles = positive net migration (more inflows). Red circles = negative net migration (more outflows). Every Country Has Its Own Climate Risks. What’s Yours? President Biden has wasted no time in moving to repudiate his predecessor’s regressive climate policies. That’s good news. This map shows which areas could be at high risk unless greenhouse-gas emissions are cut drastically. We’ve colored the map to identify the top risks across the globe, using a model by Four Twenty Seven, a company that analyzes climate risks.

OpenStreetMap Where is this? Reverse Directions Welcome to OpenStreetMap! OpenStreetMap is a map of the world, created by people like you and free to use under an open license. The Larsen C Ice Shelf, Antarctica's Biggest, is Cracking Up The narrow and mountainous Antarctic Peninsula extends north from West Antarctica some 800 miles toward Chile. This picturesque region has warmed at least twice as fast as Earth’s overall average. That’s led to the collapse of ice shelves. Larsen A, at the peninsula’s northern tip, crumbled in 1995. Origin of crops by Colin K. Khoury, Harold A. Achicanoy, Carlos Navarro-Racines, Steven Sotelo, and Andy Jarvis at the International Center for Tropical Agriculture (CIAT). Version 1.0 (May 2016).

The world as 100 people, glimpsed over 200 years of history Max Roser, the Oxford economist behind Our World In Data, has devoted his career to spreading a statistically informed view of global development. Chart how things have actually changed over history, he says, and you'll see that we've come a long way. Roser recently released a commentary on the last two centuries. It sums up world progress with the following six charts: ourworldindata.org Top scientists warn of 'ghastly future of mass extinction' and climate disruption The planet is facing a “ghastly future of mass extinction, declining health and climate-disruption upheavals” that threaten human survival because of ignorance and inaction, according to an international group of scientists, who warn people still haven’t grasped the urgency of the biodiversity and climate crises. The 17 experts, including Prof Paul Ehrlich from Stanford University, author of The Population Bomb, and scientists from Mexico, Australia and the US, say the planet is in a much worse state than most people – even scientists – understood. “The scale of the threats to the biosphere and all its lifeforms – including humanity – is in fact so great that it is difficult to grasp for even well-informed experts,” they write in a report in Frontiers in Conservation Science which references more than 150 studies detailing the world’s major environmental challenges. An estimated one million species are at risk of extinction, many within decades, according to a recent UN report.

Redrawing the Map: How the World’s Climate Zones Are Shifting As human-caused emissions change the planet’s atmosphere, and people reshape the landscape, things are changing fast. The receding line of Arctic ice has made headlines for years, as the white patch at the top of our planet shrinks dramatically. The ocean is rising, gobbling up coastlines.

Australia The Radiation Network is potentially global, and we now have some Monitoring Stations reporting intermittently from Australia, and an intermittent station from neighboring Bali, in Indonesia. = Nuclear Site Alert Level = 3 consecutive minutes of lesser of 100 CPM or 2.5 times a Station's baseline *Readings not Equalized means the Monitoring Stations are broadcasting the raw radiation count from their Geiger counters, without adjustment for different count rates existing between various Geiger counter designs.

Data The Atlas of Sustainable Development Goals 2018 presents maps, charts, and stories related to the 17 Sustainable Development Goals. It discusses trends, comparisons, and measurement issues using accessible and shareable data visualizations. The data draw on the World Development Indicators the World Bank's compilation of internationally comparable statistics about global development and the quality of people's lives. Coronavirus: 'Nature is sending us a message’, says UN environment chief Nature is sending us a message with the coronavirus pandemic and the ongoing climate crisis, according to the UN’s environment chief, Inger Andersen. Andersen said humanity was placing too many pressures on the natural world with damaging consequences, and warned that failing to take care of the planet meant not taking care of ourselves. Leading scientists also said the Covid-19 outbreak was a “clear warning shot”, given that far more deadly diseases existed in wildlife, and that today’s civilisation was “playing with fire”. They said it was almost always human behaviour that caused diseases to spill over into humans.

Europe Our network currently has a few Monitoring Stations in Europe. Keep your eye open for Yellow circles in Iceland, the Netherlands, Spain, Italy, and some intermittent stations reporting from Switzerland and Germany. = Nuclear Site Alert Level = 3 consecutive minutes of lesser of 100 CPM or 2.5 times a Station's baseline *Readings not Equalized means the Monitoring Stations are broadcasting the raw radiation count from their Geiger counters, without adjustment for different count rates existing between various Geiger counter designs. For instance, models built around a "Pancake" (see Map Legend) style of Geiger-Mueller tube typically have a 3 times count rate over Standard tubed models. Back to the Radiation Network

7 maps that will change how you see the world A Japanese architect has won a prestigious award for creating a new map, because it shows the world as it really is. The AuthaGraph World Map angles continents in order to show their true distance from one another. Hajime Narukawa won the Good Design Award, beating over 1,000 entries in a variety of categories. “The AuthaGraph World Map provides an advanced precise perspective of our planet,” explain the organizers of the award.

Why is an ocean current in the Arctic critical to world weather losing steam? Summer sea ice has been shrinking so dramatically here in the Fram Strait, high in the Arctic between Norway and Greenland, that researchers who make this trip annually point out missing patches like memories of departed friends. “The first time I was here, in 2008, you could walk on the ice,” says Norwegian Polar Institute (NPI) oceanographer Paul Dodd, gesturing from the deck of this research icebreaker toward the spot, near the Prime Meridian, where his team is about to take samples for temperature, salinity, dissolved carbon, and other chemical measurements of what is now open water. It’s dotted with only a few random, battered-looking ice drifts. Temperatures are rising and ice is melting all over Earth. But this place is special: The ocean changes that are happening right here could dramatically alter the climate for much of the rest of the planet.