Writing forCollege. On "In a Station of the Metro" On "In a Station of the Metro" Ezra Pound (from Gaudier-Brzeska, 1916) Three years ago in Paris I got out of a "metro" train at La Concorde, and saw suddenly a beautiful face, and then another and another, and then a beautiful child’s face, and then another beautiful woman, and I tried all that day to find words for what this had meant to me, and I could not find any words that seemed to me worthy, or as lovely as that sudden emotion. 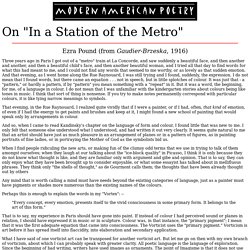 Your Book Starts Here - Storyboarding for Writers. Top Ten Writing Rules From Famous Writers. Stephen King on the Craft of Short Story Writing. 5 Tips for Young Writers. The text of Malala Yousafzai's speech at the United Nations. On July 12 2013, the first ever Youth Takeover of the UN took place, organised by the President of the UN General Assembly, UN Special Envoy for Global Education Gordon Brown and A World at School. 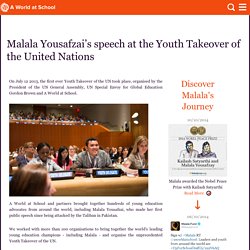 A World at School and partners brought together hundreds of young education advocates from around the world, including Malala Yousafzai, who made her first public speech since being attacked by the Taliban in Pakistan. We worked with more than 100 organisations to bring together the world's leading young education champions - including Malala - and organise the unprecedented Youth Takeover of the UN. At the same time there were parellel Youth Takeovers in many other countries around the world. Read more about this partnership in action, and the global Youth Takeovers, here. “What Can Young People Do For The World” Chinese Girl’s Speech.

This speech is from the second season of Super Speaker, a speech competition show in China. 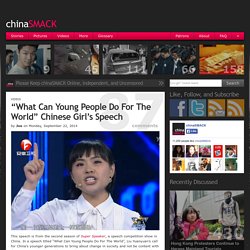 In a speech titled “What Can Young People Do For The World”, Liu Yuanyuan’s call for China’s younger generations to bring about change in society and not be content with the status quo was praised by many Chinese netizens, while others viewed her idealism as too naive. A copy on YouTube: The following is the transcription of the speech: I am a student in law school. In every single one of my courses, the professors have all said the same thing: “This is what the law stipulates, but in real life…” In reality, life is really strange. What I want to ask us young people is: what can you do for this world? I know not everyone can be the kind of person who stands at the forefront to decide the destiny of their country.

If in the future you become a street peddler, then don’t sell food made with gutter oil, and don’t shortchange people. Comments on Sina Weibo: British Teenagers speak to the Nation about serious issues. On Christmas Day 2009, the Teens' Speech film went live on MySpace with a massive 32,983 views and many more since. 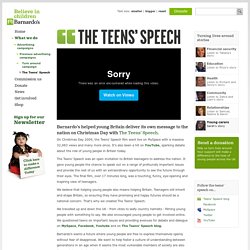 It's also been a hit on YouTube, sparking debate about the role of young people in Britain today. The Teens’ Speech was an open invitation to British teenagers to address the nation. It gave young people the chance to speak out on a range of profoundly important issues and provide the rest of us with an extraordinary opportunity to see the future through their eyes. Terrifying Teen Speech in the News Again - Garrett Epps. What kind of democracy teaches its young people they'll be punished for talking out of turn? 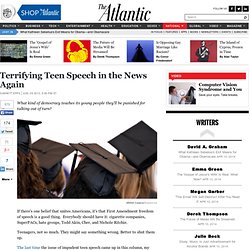 If there's one belief that unites Americans, it's that First Amendment freedom of speech is a good thing. Everybody should have it: cigarette companies, SuperPACs, hate groups, Todd Akin, Cher, and Nichole Ritchie. Teenagers, not so much. They might say something wrong. Teaching Poetry — Teaching College English. This is notes from The Chronicle‘s forum on Teaching Poetry. 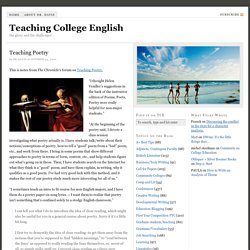 “I thought Helen Vendler’s suggestions in the back of the instructor edition of Poems, Poets, Poetry were really helpful for non-major students.” “At the beginning of the poetry unit, I devote a class session investigating what poetry actually is. I have students talk/write about their notions/conceptions of poetry, how to tell a “good” poem from a “bad” poem, etc., and work from there. I bring in some poems that show different approaches to poetry in terms of form, content, etc., and help students figure out what’s going on in those. Reading Critically - Interrogating Texts. Rogier van der Weyden, 1399 -1464. 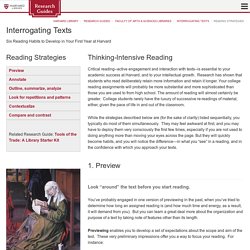 Altarpiece fragment, Mary Magdalene reading. National Gallery (Great Britain). Available through ArtSTOR Workshop of Rogier van der Weyden. St. Max Beckmann (1884-1950). Honore Daumier (1808-1879). TETYC0411Framework.pdf. English 204/ Winter 2011: POEMS AND GRADES. 1. refer to the syllabus for poem criteria in my grading process (i.e., what I am looking for in a student’s poem). 2. here is the general procedure for revision and grades: · Bring a solid rough draft to workshop in class · receive comments from peers and myself · revise poem on your own or with peer(s), let it rest, revise again* (see #3) · at the midterm mark, give me revised drafts of all poems completed to that point; schedule a conference with me to go over them; receive ‘fake grades’ for each poem. 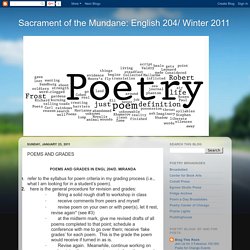 . · Revise again. . · Turn in all poems (plus major revisions of each poem) in your portfolio during finals week for your final, ‘real’ grade. 3. NOTE: you may conference with me about any of your poems at any time in the semester, during my regular office hours, or by appointment. Revision may well be the toughest part of writing. How do you decide when to stop revising? Difficult question. ENGLISH 204/ POETRY __WORKSHOP/ Fall 2009.