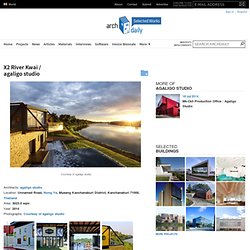 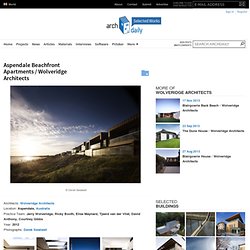 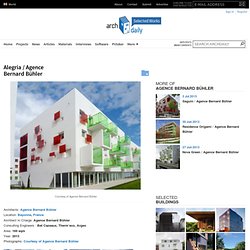 On one side, we have small collective housings (R 4 maximum), and on the other side agricultural land. - In the basement, parking for 45 seats allocated to housing. It fills the entire plot. - Ground floor, three commercial premises open onto a small square - Access to housing is through the north side through a corridor dressed with vertical blades glazed red. 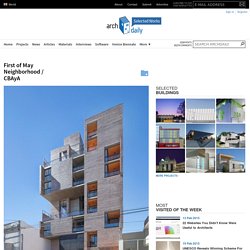 Sala, Rubén Site Area: 329 sqm Area: 1,246 sqm Year: 2012 Photographs: Federico Cairoli Contemporary cities are shaped as the result of the tension between the will of the state, (theoretically) representative of citizens, and the Market. . The struggle between these actors has conditioned, for better or worse, the urban image and even more importantly the lives of all inhabitants. This conditional relationship on a macro scale can be read in the micro scale as well, in each of the buildings that make up the urban scene. This project is part of a long line of endeavors in which we have try to verify to a greater or lesser extentthese issues. Apartment No. 1 / Architecture by Collective Terrain. Architects: Architecture by Collective Terrain Location: Mahallat, Iran Client: Ramin Mehdizadeh, Hossein Sohrabpoor, Mehdi Mehdizadeh Area: 420 sqm Year: 2010 Photographs: Omid Khodapanahi The majority of Mahallat’s economy is engaged in the business of cutting and treating stone, over half of which is discarded due to inefficiencies in stone-cutting technology. 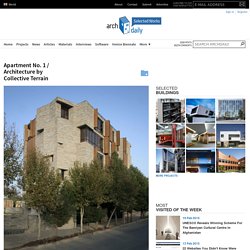 This project turns the inefficiency to economic and environmental advantage by reusing leftover stones for both exterior and some interior walls, and has led to the increasing adoption of stone recycling by local builders. The five-storey structure comprises two ground-level retail spaces and eight three-bedroom apartments above. Its austere prismatic form is balanced by the warmth of the natural materials.

Small windows are shielded by triangular stone protrusions, and larger ones have wooden shutters that allow residents to regulate light and temperature levels. * Location to be used only as a reference. Ipera 25 apartment building by Alataş Architecture & Consulting. Timber louvres and shutters form a protective shell across the exterior of this apartment building in Istanbul by Turkish studio Alataş Architecture & Consulting. 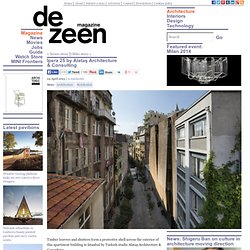 Sky Condos tower with cantilevered pools by DCPP. Vertiginous swimming pools would cantilever like diving boards from every apartment in this tower proposed for Lima, Peru, by Mexican studio DCPP Arquitectos. 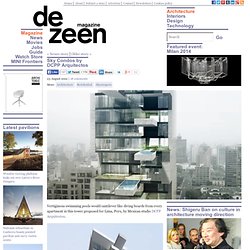 The 20-storey residential building would be constructed beside a golf course in the east of the city and feature a transparent glass facade and a series of elevated courtyards. The concrete swimming pools would jut out from each of the courtyards and are pictured in the architect's drawings without any safety rails. We've previously featured proposals for a much taller skyscraper with a projecting swimming pool - see it here. See all our stories about skyscrapers » Here's a project description from DCPP: We wanted to get away from the traditional tower; instead of piling up a series of identical apartments, we created three types that adjust to different necessities; each one with a clear individuality using the privative exterior spaces as our main core. Ground floor plan Upper floor plan 1 Upper floor plan 2 Upper floor plan 3. Endémico Resguardo Silvestre hotel in Mexico by Gracia Studio.

This hotel by Mexican architects Gracia Studio comprises 20 separate cabins dotted across the landscape in one of Mexico's wine-making regions (+ slideshow). 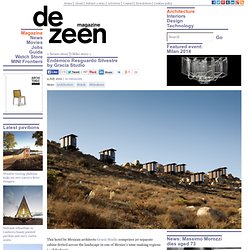 Located in the Valle de Guadalupe, the single-storey huts are lifted off the ground on steel frames so that they impact as little as possible on the earth below. Corten steel panels overlap one another to clad the exterior walls and the pitched roofs are covered with corrugated panels of the weathered metal. Each room contains one ensuite bedroom and opens onto a small wooden deck. Other hotels in rural areas we've featured include triangular huts proposed a deserted beach and a hotel at a Norwegian hunting lodge. Photography is by Luis García. 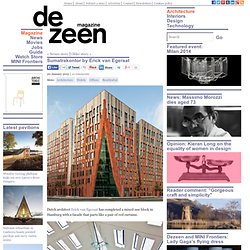 Located in the Hafencity development area of the city, the ten-storey Sumatrakontor is clad in stone that references the red colour of brick buildings nearby on the harbour. Shops line the building at ground level, while offices, luxury apartments and a five star hotel are contained in the floors above. Where the facade parts, glazing screens a ground-floor lobby that extends up through the full height of the building. Erick van Egeraat also recently completed an underground museum extension - see it here and see more projects by the architect here. Photography is by J Collingridge. Dolomitenblick apartment block by Plasma Studio. Jagged copper balconies emulate the topography of surrounding landscape as they fold around the exterior of this apartment block in north-east Italy by architects Plasma Studio (+ slideshow). 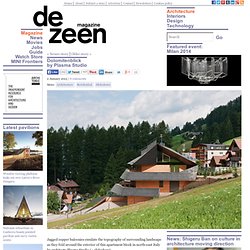