Slow-motion wrecks: how thawing permafrost is destroying Arctic cities. At first, Yury Scherbakov thought the cracks appearing in a wall he had installed in his two-room flat were caused by shoddy workmanship. 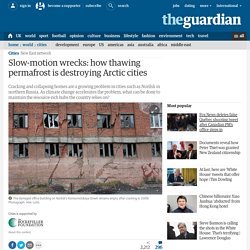 But then other walls started cracking, and then the floor started to incline. “We sat on the couch and could feel it tilt,” says his wife, Nadezhda, as they carry furniture out of the flat. Yury wasn’t a poor craftsman, and Nadezhda wasn’t crazy: one corner of their five-storey building at 59 Talnakhskaya Street in the northern Russian city of Norilsk was sinking as the permafrost underneath it thawed and the foundation slowly disintegrated.

In March 2015, local authorities posted notices in the stairwells that the building was condemned. Cracking and collapsing structures are a growing problem in cities like Norilsk – a nickel-producing centre of 177,000 people located 180 miles above the Arctic Circle – as climate change thaws the perennially frozen soil and increases precipitation. The city has been offering residents replacement homes elsewhere. Pingo Canadian Landmark - Pingo Canadian Landmark - Natural Environment. Geography Pingos and wetlands© Parks Canada / Hillarie Zimmermann The Tuktoyaktuk Peninsula represents one of the most unusual landscapes in the Northwest Territories and Canada. 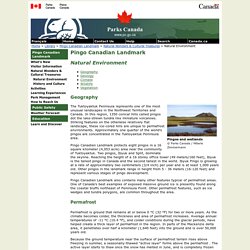 In this region, 1350 conical hills called pingos dot the lake-strewn tundra like miniature volcanoes. Striking features on the otherwise relatively flat landscape, these ice-cored hills are unique to permafrost environments. Inuit fear they will be overwhelmed as ‘extinction tourism’ descends on Arctic. In a few days, one of the world’s largest cruise ships, the Crystal Serenity, will visit the tiny Inuit village of Ulukhaktok in northern Canada. 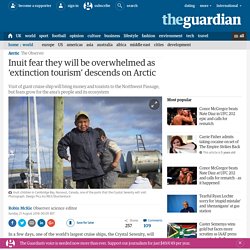 Hundreds of passengers will be ferried to the little community, more than doubling its population of around 400. The Serenity will then raise anchor and head through the Northwest Passage to visit several more Inuit settlements before sailing to Greenland and finally New York. It will be a massive undertaking, representing an almost tenfold increase in passenger numbers taken through the Arctic on a single vessel – and it has triggered considerable controversy among Arctic experts.

Permafrost (n)—The technical definition is soil and/or rock that has remained below 32°F for more than two years, regardless if significant amounts of ice exist or not. 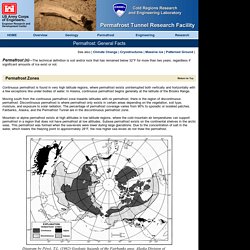 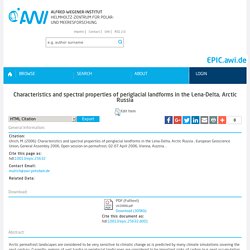 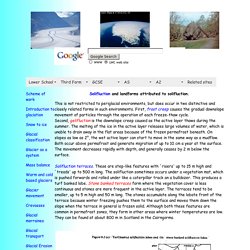 This is not restricted to periglacial environments, but does occur in two distinctive and closely related forms in such environments. First, frost creep causes the gradual downslope movement of particles through the operation of each freeze-thaw cycle. Bateman%20et%20al%20text%20post%20ref%20text%2Bfig%20jb. 6 8permafros 508. PeriglacialPaper. Periglacial landforms Cairngorm. Thawing Permafrost. Permafrost - what is it? Periglaciation - Video Learning - WizScience.com. GE2011L21. Geomorphology. Periglacial originally defined as the zone peripheral to glaciersnow defined as near-glacial in the sense of either location or conditions: perennially frozen ground (permafrost) seasonally-thawed ground (active layer) incomplete vegetation cover of herbaceous plants and dwarf trees ground is snow free for part of the year frequent fluctuations of air temperature across 0o C. 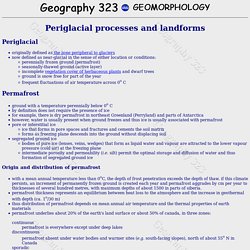 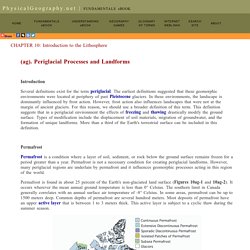 The earliest definitions suggested that these geomorphic environments were located at periphery of past Pleistocene glaciers. In these environments, the landscape is dominantly influenced by frost action. However, frost action also influences landscapes that were not at the margin of ancient glaciers. For this reason, we should use a broader definition of this term. Permafrost Permafrost is a condition where a layer of soil, sediment, or rock below the ground surface remains frozen for a period greater than a year. Cairngorms.