Trump finalizes drilling plan for iconic Arctic National Wildlife Refuge Plan clears the way for an oil and gas lease auction on the refuge’s 1.6 million-acre coastal plain by December 2021. Twitter. Photographer Amos Chapple experienced the polar nights of Murmansk where the sun doesn't rise for over a month in winter... other worldly!

Using the power of @googleearth to help #ibgeog students revise. This project helps students review and reflect upon the content from several lessons covered in class. #eartheveryday #earthedu #earthstories. This means they won't be funding the pillaging of the Arctic National Wildlife Refuge, a huge win for Gwich'in organizers. It sure will be interesting to see what banks are willing to finance this vandalism. "I'll take you to the tundra" by Samotsvety band, USSR, 1973… Exxon wouldn't let this indigenous leader speak, so let's spread the word ourselves.… Sierra Club sur Twitter : "Donald Tritt, a Gwich'in leader w/ @OurArcticRefuge, traveled from Alaska to Texas to be at the #ExxonAGM today to ask @ExxonMobil to stay out of the Arctic Refuge. Exxon wouldn't even let him speak. Here's what he would have sa. 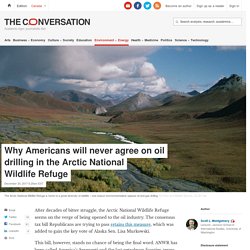 The consensus tax bill Republicans are trying to pass retains this measure, which was added to gain the key vote of Alaska Sen. Lisa Murkowski. This bill, however, stands no chance of being the final word. ANWR has been called America’s Serengeti and the last petroleum frontier, terms I’ve seen used over more than a decade studying this area and the politics around it. But even these titles merely hint at the multifold conflict ANWR represents – spanning politics, economics, culture and philosophy. Differing views from the start Little of this debate, which stretches back decades, makes sense without some background. With 45 species of land and marine mammals and over 200 species of birds from six continents, ANWR is more biodiverse than almost any area in the Arctic. ANWR thus began as a battleground over state versus federal control of resources.

How much oil? A magical 'Snow Angel' left by Steller's sea eagle (the heaviest in the world) on the Kamchatka Peninsula by Liana Varavskaya. Here is a video of a polar bear petting a doggo. That is all. Permafrost - what is it? *Tundra encroachment by tundra due to climate change. In Alaska, trees growing at the very edge of their northern range may be influenced by warming climate. 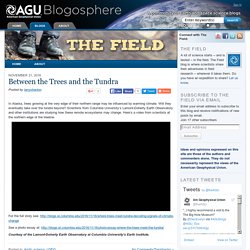 Will they eventually take over the tundra beyond? Scientists from Columbia University’s Lamont-Doherty Earth Observatory and other institutions are studying how these remote ecosystems may change. Here’s a video from scientists at the northern edge of the treeline. Lennox Island residents may be the first climate change refugees in Canada. As sea level rise threatens homes, indigenous people living on tiny Lennox Island face the possibility of becoming Canada‘s first climate change refugees. 450 Mi’kmaq people reside there, and have tried to protect their coasts with rock. 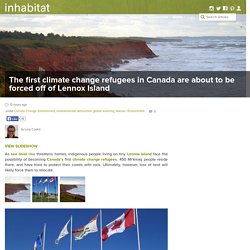 Ultimately, however, loss of land will likely force them to relocate. Lennox Island, which is right by Prince Edward Island, is losing land as sea levels creep upwards. In 1880, the island was around 1,500 acres big. Land surveys reveal the tiny island has now lost nearly 300 acres of that land. At least 77 acres were lost just between 1968 and 2010. Related: Tiny Alaskan village votes to abandon 400-year-old ancestral home because of climate change Residents have stacked boulders on the shores of the island in an attempt to guard against erosion, but such a tactic will likely only work for so long. Via VICE Images via Wikimedia Commons and Larry on Flickr.

Dirty, isolated and freezing: life in Arctic circle city – in pictures. Going back to their Inupiaq roots: Barrow residents vote to rename city - KTVA 11. The people of Barrow have spoken; the majority of voters want their Arctic town’s name to reflect their heritage. 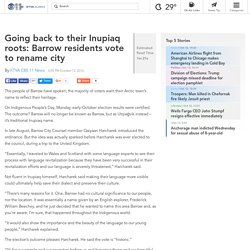 On Indigenous People’s Day, Monday, early-October election results were certified. The outcome? Barrow will no longer be known as Barrow, but as Utqiaġvik instead – it’s traditional Inupiaq name. In late August, Barrow City Counsel member Qaiyaan Harcharek introduced the ordinance. But the idea was actually sparked before Harcharek was ever elected to the council, during a trip to the United Kingdom. “Essentially, I traveled to Wales and Scotland with some language experts to see their process with language revitalization because they have been very successful in their revitalization efforts and our language is severely threatened,” Harcharek said. Not fluent in Inupiaq himeself, Harcharek said making their language more visible could ultimately help save their dialect and preserve their culture.

“There’s many reasons for it. The election’s outcome pleases Harcharek.