See glaciers melt before your eyes. Change: Glacier Mass Balance. In Earth’s highest mountains and across the land in both polar regions, brief summers were long overpowered by snowy winters. 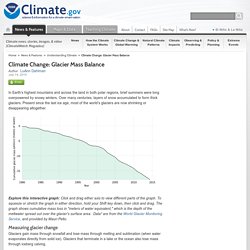 What the Earth would look like if all the ice melted. Glacial Rebound: The Not So Solid Earth. Glacier recession - AntarcticGlaciers.org. Worldwide, glaciers are shrinking and receding. 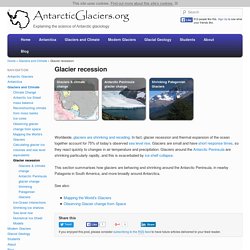 In fact, glacier recession and thermal expansion of the ocean together account for 75% of today’s observed sea level rise. Glaciers are small and have short response times, so they react quickly to changes in air temperature and precipitation. Glaciers around the Antarctic Peninsula are shrinking particularly rapidly, and this is exacerbated by ice shelf collapse. This section summarises how glaciers are behaving and shrinking around the Antarctic Peninsula, in nearby Patagonia in South America, and more broadly around Antarctica. See also: Climate change could lead to loss of biodiversity in glacier-fed rivers. By RTCC Staff Climate change induced glacier retreat could impact the ecosystems of river relying on the water run off (Vironevaeh/creative commons) Climate change and glacier retreat could impact biodiversity of river systems, according to new research. 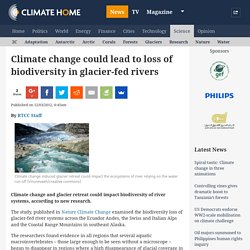 The study, published in Nature Climate Change examined the biodiversity loss of glacier-fed river systems across the Ecuador Andes, the Swiss and Italian Alps and the Coastal Range Mountains in southeast Alaska. The researchers found evidence in all regions that several aquatic macroinvertebrates – those large enough to be seen without a microscope – began to disappear in regions where a high disappearance of glacial coverage in the river’s catchment was witnessed. Between 8 to 14 species could be lost completely with the complete disappearance of glaciers in the region, according to the scientists.

Change: Glacier Mass Balance. Global Warming. Systems View Simulations of the Possible Scenarios One aspect of the systems view that is very useful is the construction of simulation models that will predict what will happen if the current processes continue at the same rate. 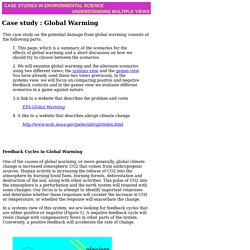 A simple simulation is the projection of when oil or natural gas reserves will be depleted if they are consumed at the same rate as they are now compared to if there is the same rate of growth of the consumption. This is a very enlightening comparison that shows that a resource that might last 200 years at the current rate of consumption (barrels of oil per year for example) might only last 50 years if we project that the rate of growth of consumption continues at 5% per year.

We have seen other examples of this type of modeling when we studied population growth models. Athabasca Glacier: a tragic vanishing act. Posted on 26 August 2014 by Andy Skuce The Athabasca Glacier in the Canadian Rocky Mountains is probably the easiest glacier in the world to access by car. 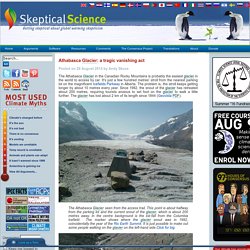 It's just a few hundred metres' stroll from the nearest parking lot on the magnificent Icefields Parkway in Alberta. The problem is, the stroll keeps getting longer by about 10 metres every year. Since 1992, the snout of the glacier has retreated about 200 metres, requiring tourists anxious to set foot on the glacier to walk a little further. The glacier has lost about 2 km of its length since 1844 (Geovista PDF). Chapter 15, part 5, Chapter Tutorial, Cenozoic Events, Levin 2005: The Earth Through Time, 8th edition, Wiley. Eighth Edition by Harold L. 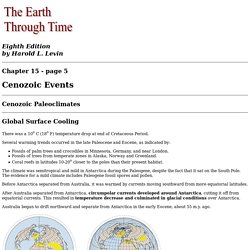 Disappearing Glaciers What does that mean for Olympic’s glaciers? 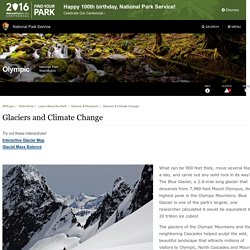 Since these rivers of ice are critical resources, in 2009 Olympic National Park did a new glacier inventory examining surface area as well as elevations of larger glaciers to calculate the volume of ice loss and impacts on the park’s glacial-fed rivers. In an area known for its rain, summers are actually quite dry. Glacier melt is an important part of maintaining summer flows for aquatic life that depends on these lifelines.

Global Climate Change, Melting Glaciers. "If we don't have it, we don't need it," pronounces Daniel Fagre as we throw on our backpacks. 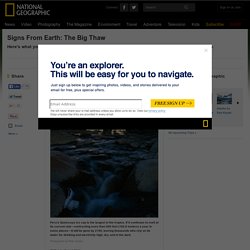 We're armed with crampons, ice axes, rope, GPS receivers, and bear spray to ward off grizzlies, and we're trudging toward Sperry Glacier in Glacier National Park, Montana. I fall in step with Fagre and two other research scientists from the U.S. Geological Survey Global Change Research Program. They're doing what they've been doing for more than a decade: measuring how the park's storied glaciers are melting. So far, the results have been positively chilling. "Things that normally happen in geologic time are happening during the span of a human lifetime," says Fagre.

Scientists who assess the planet's health see indisputable evidence that Earth has been getting warmer, in some cases rapidly. "This glacier used to be closer," Fagre declares as we crest a steep section, his glasses fogged from exertion. Everywhere on Earth ice is changing. Rising sea level produces a cascade of effects. Glaciers - Evidence - Exploring Climate Change. Vanishing glaciers around the world give us some of the starkest images of rising global temperatures. 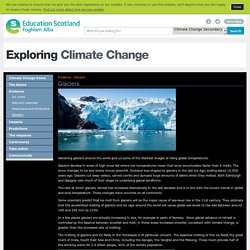 Glaciers develop in areas of high snow fall where low temperatures mean that snow accumulates faster than it melts. The snow changes to ice and slowly moves downhill. Scotland was shaped by glaciers in the last Ice Age, ending about 10,000 years ago. Glaciers cut deep valleys, carved corries and dumped huge amounts of debris when they melted. Both Edinburgh and Glasgow owe much of their shape to underlying glacial landforms. Glaciers and climate change - Antarctic Glaciers. 1. 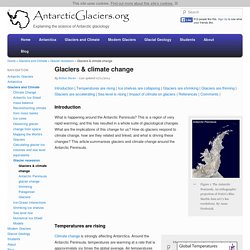 Ice cores have been taken from around the world, including Peru, Canada, Greenland, Antarctica, Europe, and Asia. These cores are continuous records providing scientists with year-by-year information about past climate.