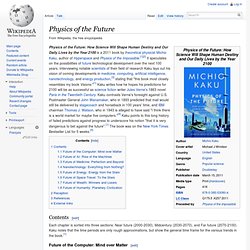 Kaku notes that the time periods are only rough approximations, but show the general time frame for the various trends in the book.[1] Future of the Computer: Mind over Matter[edit] Kaku begins with Moore's law, and compares a chip that sings "Happy Birthday" with the Allied forces in 1945, stating that the chip contains much more power,[1][6] and that "Hitler, Churchill, or Roosevelt might have killed to get that chip.

" Stephen Hawking. Stephen William Hawking CH, CBE, FRS, FRSA ( i/ˈstiːvən ˈhɔːkɪŋ/; born 8 January 1942) is an English theoretical physicist, cosmologist, author and Director of Research at the Centre for Theoretical Cosmology within the University of Cambridge.[16][17] His scientific works include a collaboration with Roger Penrose on gravitational singularity theorems in the framework of general relativity, and the theoretical prediction that black holes emit radiation, often called Hawking radiation. 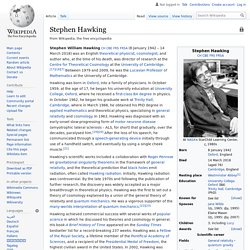 Hawking was the first to set forth a theory of cosmology explained by a union of the general theory of relativity and quantum mechanics. He is a vigorous supporter of the many-worlds interpretation of quantum mechanics.[18][19] He is an Honorary Fellow of the Royal Society of Arts, a lifetime member of the Pontifical Academy of Sciences, and a recipient of the Presidential Medal of Freedom, the highest civilian award in the United States. Personal life Parents. A Brief History of Time. Overview[edit] A Brief History of Time attempts to explain a range of subjects in cosmology, including the big bang, black holes and light cones, to the nonspecialist reader. 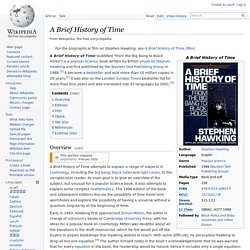 Its main goal is to give an overview of the subject, but unusual for a popular science book, it also attempts to explain some complex mathematics. Brian Cox (physicist) Brian Edward Cox OBE (born 3 March 1968)[1] is an English physicist and former musician, a Royal Society University Research Fellow, PPARC Advanced Fellow at the University of Manchester.[13][14] He is a member of the High Energy Physics group at the University of Manchester, and works on the ATLAS experiment at the Large Hadron Collider (LHC)[15][16] at CERN, near Geneva, Switzerland. 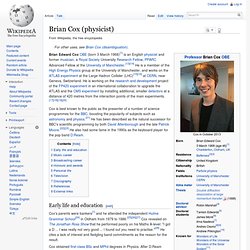 He is working on the research and development project of the FP420 experiment in an international collaboration to upgrade the ATLAS and the CMS experiment by installing additional, smaller detectors at a distance of 420 metres from the interaction points of the main experiments.[17][18][19][20] Cox's parents were bankers[1] and he attended the independent Hulme Grammar School[24] in Oldham from 1979 to 1986.[25][26][27] Cox revealed on The Jonathan Ross Show that he performed poorly on his Maths A-level: "I got a D ... 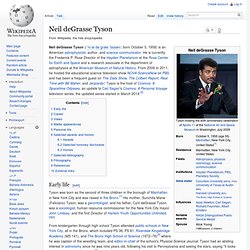 He is currently the Frederick P. Rose Director of the Hayden Planetarium at the Rose Center for Earth and Space and a research associate in the department of astrophysics at the American Museum of Natural History. From 2006 to 2011, he hosted the educational science television show NOVA ScienceNow on PBS and has been a frequent guest on The Daily Show, The Colbert Report, Real Time with Bill Maher, and Jeopardy!. Tyson is the host of Cosmos: A Spacetime Odyssey, an update to Carl Sagan's Cosmos: A Personal Voyage television series; the updated series started in March 2014.[2] Early life[edit] Astronomer Carl Sagan, who was a faculty member at Cornell University, tried to recruit Tyson to Cornell for undergraduate studies.[3] In an interview with writer Daniel Simone,[8] Tyson said: Promoting Cosmos TV series in Australia for National Geographic. 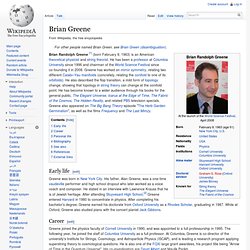 His father, Alan Greene, was a one-time vaudeville performer and high school dropout who later worked as a voice coach and composer. He stated in an interview with Lawrence Krauss that he is of Jewish heritage. After attending Stuyvesant High School,[2] Greene entered Harvard in 1980 to concentrate in physics. After completing his bachelor's degree, Greene earned his doctorate from Oxford University as a Rhodes Scholar, graduating in 1987. The Elegant Universe. The Elegant Universe: Superstrings, Hidden Dimensions, and the Quest for the Ultimate Theory is a book by Brian Greene published in 1999, which introduces string and superstring theory, and provides a comprehensive though non-technical assessment of the theory and some of its shortcomings. 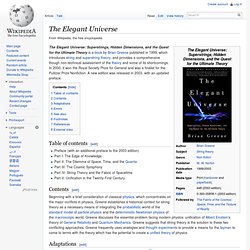 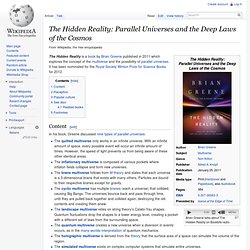 The Hidden Reality is a book by Brian Greene published in 2011 which explores the concept of the multiverse and the possibility of parallel universes. It has been nominated for the Royal Society Winton Prize for Science Books for 2012. Antony Garrett Lisi. Lisi is known for "An Exceptionally Simple Theory of Everything," a paper proposing a unified field theory based on the E8 Lie group, combining particle physics with Einstein's theory of gravitation. 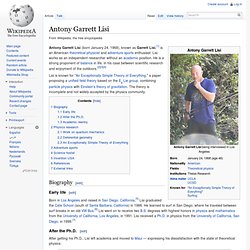 The theory is incomplete and not widely accepted by the physics community. Biography[edit] Garry Davis. Sol Gareth "Garry" Davis (27 July 1921 – 24 July 2013) was an international peace activist who created the World Passport, a travel document originally based on the unrecognised concept of world citizenship. 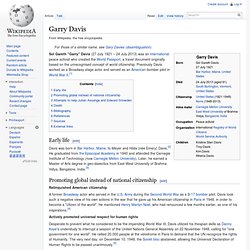 Previously Davis worked as a Broadway stage actor and served as an American bomber pilot in World War II.[1] Early life[edit] / - World Government of World Citizen - Welcome. Defending Yourself Against "Legal Fiction" We as living people no longer know or understand who we are and everything has been inverted upside down. We have lost our identities and once again have given away our birthright for "bowl of pottage. " First Comment: Paul Greetings Henry, In our work to date, we have come across these claims several times: it's important to realize that some of themcan be substantiated with good authority, while othersappear to be theories that have somehow "morphed" into fact primarily for the one(s) asserting such claims. These two short essays are good places to begin,to acquire a necessary foundation: well that the U.S.

Our letter to Bill Gates re: USA v. Timothy Leary. George Carlin. George Denis Patrick Carlin[1] (May 12, 1937 – June 22, 2008) was an American comedian, writer, social critic, and actor who won five Grammy Awards for his comedy albums.[2] Carlin was noted for his black comedy as well as his thoughts on politics, the English language, psychology, religion, and various taboo subjects.

Carlin and his "Seven dirty words" comedy routine were central to the 1978 U.S. Supreme Court case F.C.C. v. Atheism. Atheism is, in a broad sense, the rejection of belief in the existence of deities.[1][2] In a narrower sense, atheism is specifically the position that there are no deities.[3][4][5] Most inclusively, atheism is the absence of belief that any deities exist.[4][5][6][7] Atheism is contrasted with theism,[8][9] which, in its most general form, is the belief that at least one deity exists.[9][10][11] The term "atheism" originated from the Greek ἄθεος (atheos), meaning "without god(s)", used as a pejorative term applied to those thought to reject the gods worshiped by the larger society.[12] With the spread of freethought, skeptical inquiry, and subsequent increase in criticism of religion, application of the term narrowed in scope.

The first individuals to identify themselves using the word "atheist" lived in the 18th century during the Age of Enlightenment. Arguments for atheism range from the philosophical to social and historical approaches. Definitions and distinctions Range. Richard Dawkins. The God Delusion. The God Delusion is a 2006 best-selling,[1] non-fiction book by English biologist Richard Dawkins, professorial fellow of New College, Oxford,[2][3] and former holder of the Charles Simonyi Chair for the Public Understanding of Science at the University of Oxford.

In The God Delusion, Dawkins contends that a supernatural creator almost certainly does not exist and that belief in a personal god qualifies as a delusion, which he defines as a persistent false belief held in the face of strong contradictory evidence. He is sympathetic to Robert Pirsig's statement in Lila that "when one person suffers from a delusion it is called insanity. When many people suffer from a delusion it is called religion".[4] The book has attracted widespread commentary, with many books written in response.

Background[edit] Dawkins has argued against creationist explanations of life in his previous works on evolution. Penn Jillette. Early life[edit] Jillette was born in Greenfield, Massachusetts. His mother, Valda R. Jillette (née Parks; 1909–2000),[2] was a secretary, and his father, Samuel Herbert Jillette (1912–1999),[2] worked at Greenfield's Franklin County Jail.[3][4][5] Penn became an atheist in his early teens after reading the Bible and was subsequently asked to leave the church after asking questions in a youth group that also made skeptics of his peers.[6] Jillette became disenchanted with traditional illusionist acts that presented the craft as authentic magic, such as The Amazing Kreskin on The Tonight Show Starring Johnny Carson. At age eighteen, he saw a show by illusionist James Randi, and became enamored of his approach to magic that openly acknowledged deception as entertainment rather than a mysterious supernatural power.