More Solar Cyclomania. [note, I believe the term cyclomania was invented by Willis, so I want to make sure he gets credit. 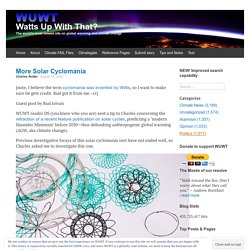 Rud got it from me. ~cr] Guest post by Rud Istvan WUWT reader DS (you know who you are) sent a tip to Charles concerning the retraction of a recent Nature publication on solar cycles, predicting a ‘modern Maunder Minimum’ before 2050—thus debunking anthropogenic global warming (AGW, aka climate change). Previous investigative forays of this solar cyclomania sort have not ended well, so Charles asked me to investigate this one. I did, and at first was not certain the simple obvious answer was worthy of a guest post. The retracted paper is Zharkova et.al. 2019 . Her saga is reported in three parts: what she did, why Nature retracted over her objection, and why she should never have been published by Nature in the first place because of fundamental background math and physics issues. What she did An admonition to potential persnickety WUWT critics, like DS. Side comment. What is REALLY wrong.

The dimmest state of the Sun: TSI and Global warming. This new paper raises some questions about the role of total solar irradiance (TSI) and global warming. 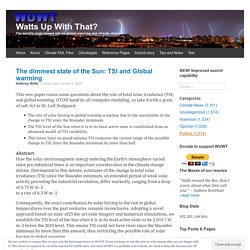 OTOH hand its all computer modeling, so take it with a grain of salt. h/t to Dr. Leif Svalgaard. Solar Cyles in Earth Atmosphere. H/T to Ireneusz Palmowski for pointing me to this presentation of a paper Regional and temporal variability of solar activity and galactic cosmic ray effects on the lower atmosphere circulation by S. 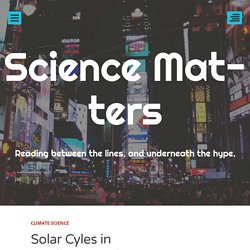 Veretenenko and M. Ogurtsov Advances in Space Research · February 2012. Squeezing The Sponge. Over in the Tweetosphere, where I’m @WEschenbach, I read that we’re in for rainy times: The atmosphere cools and shrinks when the Sun gets sleepy. 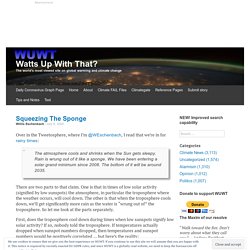 Rain is wrung out of it like a sponge. We have been entering a solar grand minimum since 2008. The bottom of it will be around 2035. There are two parts to that claim. New Study: Solar Forcing Estimates Since 1750 Could Be Much Larger Than Estimates Of Anthropogenic Forcing. By Kenneth Richard on 11. 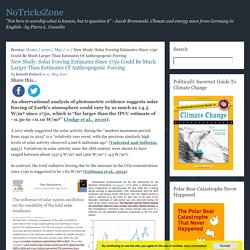 May 2020 An observational analysis of photometric evidence suggests solar forcing of Earth’s atmosphere could vary by as much as ±4.5 W/m² since 1750, which is “far larger than the IPCC estimate of −0.30 to +0.10 W/m²” (Judge et al., 2020). A 2017 study suggested the solar activity during the “modern maximum period from 1940 to 2015” is a “relatively rare event, with the previous similarly high levels of solar activity observed 4 and 8 millennia ago” (Yndestad and Solheim, 2017). IPCC Politics and Solar Variability.

By Andy May This post is about an important new paper by Nicola Scafetta, Richard Willson, Jae Lee and Dong Wu (Scafetta, Willson and Lee, et al. 2019) on the ACRIM versus PMOD total solar irradiance (TSI) composite debate that has been raging for over 20 years. 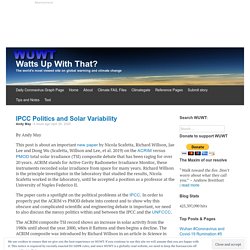 ACRIM stands for Active Cavity Radiometer Irradiance Monitor, these instruments recorded solar irradiance from space for many years. Richard Willson is the principle investigator in the laboratory that studied the results, Nicola Scafetta worked in the laboratory, until he accepted a position as a professor at the University of Naples Federico II. Scientists Divided Over Impact Of Solar Minimum On Global Temperatures. Earth could face frosty weather and biting snow storms over the next 30 years as an ominous “solar minimum” grips the planet, a scientist has warned. 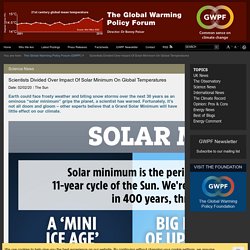 Fortunately, it’s not all doom and gloom – other experts believe that a Grand Solar Minimum will have little effect on our climate. The cold snaps – caused by the Sun entering a natural “hibernation” – threaten to trigger food shortages as temperatures slump across the planet, experts say. Sunspots, Verse 25. Guest Post by Willis Eschenbach [See update at the end] I started out as a true believer that sunspots (or something that changes in sync with sunspots, like heliomagnetism, cosmic rays, solar wind, etc.) had a strong effect on the weather. 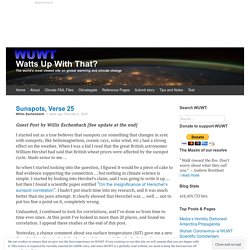 When I was a kid I read that the great British astronomer William Hershel had said that British wheat prices were affected by the sunspot cycle. Made sense to me … So when I started looking into the question, I figured it would be a piece of cake to find evidence supporting the connection … but nothing in climate science is simple. I started by looking into Hershel’s claim, and I was going to write it up … but then I found a scientific paper entitled “On the insignificance of Herschel’s sunspot correlation“. Munich Climate Conference 2019. Antifa thugs outside Munich Conference Center. 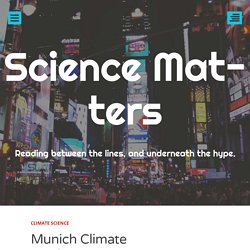 Thanks to Andreas Müller for writing at his blog hintermbusch on four key presentations at the EIKE Climate Conference on Nov. 23, 2019. As many have read, eco-terrorists forced the sessions out of the scheduled venue, but the gatherings went on elsewhere. So much for dialogue in search of scientific truth. Here are some excerpts in italics with my bolds to encourage readers to read his informative report. Surprising Parallels Found Between Solar Activity And Hurricane Development. Cat 5 Hurricane “Dorian” showed a development parallel to a solar storm lasting several days, which reached the earth from 27 August to 4 September 2019. 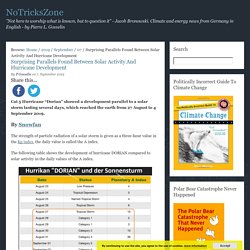 55 New (2019) Scientific Papers Link Solar Activity To Climate Change. By Kenneth Richard on 3. October 2019 In the last few years, hundreds of peer-reviewed scientific papers have been published linking changes in solar activity to Earth’s climate (2016, 2017, 2018). The evidence for a robust Sun-Climate connection continues to accumulate in 2019. When it comes to the Sun’s influence on climate, one conclusion is certain: there is no widespread scientific agreement as to how and to what extent solar activity and its related parameters (i.e., galactic cosmic rays, geomagnetic activity, solar wind flux) impact changes in the Earth’s temperature and precipitation. The disagreement is so chasmic and the mechanisms are so poorly understood that scientists’ estimates of the influence of direct solar irradiance forcing between the 17th century and today can range between a negligible +0.1 W m-2 to a very robust +6 W m-2 (Egorova et al., 2018; Mazzarella and Scafetta, 2018).

CO2 Climate Forcing In The Earth System Context: The Honey Bee Versus The Sun. Over the course of a 12 hour period on a cloudless day, 500 Wm-2 of solar energy pummels past the ocean surface to depths of 20 or more meters, warming up the first 2 meters of the ocean by 2.0 K. Image Source: Fairall et al., 1996 In contrast, the infrared radiation absorbed and re-emitted in all directions by CO2 molecules cannot penetrate past the ocean’s 0.1 to 1 mm “thick” skin layer. Image Source: Skeptical Science blog Clouds and Ocean Domination. Evidence of the 11 year Solar Cycle in the Stratosphere. Solar input to high latitudes and the global ice volume. By Donald Rapp, Ralf Ellis and Clive Best A review of the relationship between the solar input to high latitudes and the global ice volume over the past 2.7 million years. Abstract While there is ample evidence that variations in solar input to high altitudes is a “pacemaker” for the alternating glacial and interglacial periods over the past ~ 2.7 my, there are two major difficulties with the standard Milankovitch theory:

Satellite Evidence Affirms Solar Activity Drove ‘A Significant Percentage’ Of Recent Warming. By Kenneth Richard on 25. March 2019. It’s the gradient, stupid! How does the Sun drive climate change? Guest Post by Javier The dispute between scholars that favor a periodical interpretation of climate changes, mostly based on astronomical causes, and those that prefer non-periodical Earth-based explanations has a long tradition that can be traced to the catastrophism-uniformitarianism dispute and how the theory of ice ages (now termed glaciations) fitted in. Prior to the scientific proposal of ice ages in 1834, most scholars that cared about the issue believed that the Earth had been progressively cooling from a hot start, as tropical fossils at high latitudes appeared to support. By 1860 scholars had been convinced by evidence that not one but several glaciations had taken place in the distant past.

By then scientists trying to explain the cause of past glaciations were split in two. In the 1960’s and early 70’s Milankovitch theory was discredited with only a handful of followers left.

Orbital Changes and the Sun

Notch-Delay Solar Theory. Solar Activity and Regional Climate Patterns. My experience at the German Bundestag's Environment Committee in a pre-COP24 discussion. Last week I had the opportunity to talk in front of the Environment committee of the German Bundestag. It was quite an interesting experience, and frankly, something I would have considered unlikely before receiving the invitation. It was in fact the first time a climate "skeptic" like myself appeared behind those doors in many years.

As I understand, the committee was used to inviting Prof. The Next Grand Minimum – To examine the social and economic impacts of the next Grand Solar Minimum – See About. First detection of climate change on another planet? Satellite data reveals Venus is going through a change in it’s atmosphere, and the driver seems to be the sun. From the Institute of Space and Astronautical Science (ISAS) part of Japan Aerospace Exploration Agency (JAXA) comes this intriguing bit of research using data from the Akatsuki satellite. Church of Sol: The Solar Cycle's Potential Impact on Weather and Climate by Bob Henson.

However, don’t expect it to be “comprehensive” at all as hundreds of scientific publications showing profound impacts by sun and oceans will go ignored. Climate science has turned into a religion that centers on a single act of faith. Why the Sun Controls the Climate and CO2 is Meaningless – CO2 is Life. To understand AGW, one must understand quantum physics. The Greenhouse Gas Effect is the thermalization of Longwave Infrared (LWIR) Photons. LWIR is relatively long-wavelength electromagnetic (EM) radiation and having a long-wavelength, it doesn’t pack much energy into a unit of distance. 100+ Papers – Sun Drives Climate. 3 New (2018) Papers Link Modern Warming And Past Cooling Periods To High, Low Solar Activity. Evidence the Sun may have turned “blue” during 1450s-1460s. Chinese researchers claim they discovered a 500 year solar cycle that may affect climate.

Scientists Find Sun-Driven Temperature Changes Led CO2 Changes By 1300-6500 Years In The Ancient Past. A Short Summary of Soon, Connolly and Connolly, 2015; “Re-evaluating the role of solar variability on Northern Hemisphere temperature trends since the 19th Century” The Sun-Climate Connection: Over 100 Scientific Papers From 2016 Link Solar Forcing To Climate Change. Mars Melt Hints at Solar, Not Human, Cause for Warming, Scientist Says - Principia Scientific International. Scientists Find Climate’s ‘Cause Of Causes’…Highest Solar Activity In 4000 Years Just Ended…Cooling Begins In 2025. Claim: Solar activity not a key cause of climate change, study shows. 20 New Scientific Papers Link Modern Climate Trends To Solar Forcing. NASA: The chill of solar minimum is being felt in our atmosphere – cooling trend seen. The longest stretch of a blank sun since 2010 — Vencore Weather. Current Solar Cycle 3rd All-Time Weakest …Next Cycle Likely To Be Weaker!