Martian curse: Russian probe may crash in populated area. Nukes on Mars. World Nuclear News, the information arm of the World Nuclear Association which seeks to boost the use of atomic energy, last week heralded a NASA Mars rover slated to land on Mars on Monday, the first Mars rover fueled with plutonium. 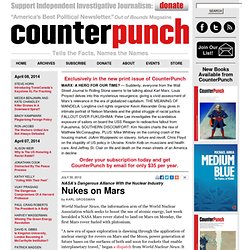 “A new era of space exploration is dawning through the application of nuclear energy for rovers on Mars and the Moon, power generation at future bases on the surfaces of both and soon for rockets that enable interplanetary travel,” began a dispatch from World Nuclear News. It was headed: “Nuclear ‘a stepping stone’ to space exploration.” In fact, in space as on Earth there are safe, clean alternatives to nuclear power. Solar storm of 1859. Earliest spiral galaxy ever observed puzzles astronomers.

When astronomers used the Hubble Space Telescope to scout a remote patch of the sky and investigate the early stages of galaxy formation, they stumbled upon something which they did not expect. 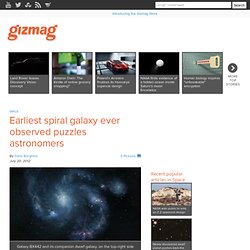 They realized that the distant spiral galaxy BX422, appearing to us as it was only three billion years after the Big Bang, seems to be uncharacteristically well-formed for its young age. By studying its features, which are in direct contrast with our current knowledge of galaxy formation, scientists hope to shed more light on how spiral galaxies – including our own – are formed. The stars inside a protogalaxy develop at very different rates. This uneven pace compresses the interstellar gas and creates differences in the gravitational field that force stars, dust and gas into a rotating disc. Eventually, additional differences in gravity can also build the arms of a spiral galaxy. Russian Navy UFO records say aliens love oceans. Unidentified space object falls from the sky (VIDEO) Space ball: UFO shocks Brazilians (VIDEO, PHOTOS) SABRE on course to chill SKYLON into orbit. Pondering a universe without purpose.

The illusion of purpose and design is perhaps the most pervasive illusion about nature that science has to confront on a daily basis. 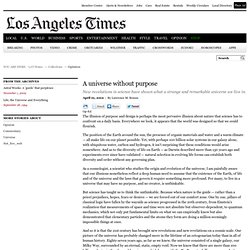 Everywhere we look, it appears that the world was designed so that we could flourish. The position of the Earth around the sun, the presence of organic materials and water and a warm climate — all make life on our planet possible. Yet, with perhaps 100 billion solar systems in our galaxy alone, with ubiquitous water, carbon and hydrogen, it isn't surprising that these conditions would arise somewhere. And as to the diversity of life on Earth — as Darwin described more than 150 years ago and experiments ever since have validated — natural selection in evolving life forms can establish both diversity and order without any governing plan. But science has taught us to think the unthinkable. ET Is Out There, So Get Ready. 'Family Guy' Creator Donates Carl Sagan Papers. The creator of the hit animated series "Family Guy" has donated a vast trove of the late astronomer Carl Sagan's papers to the Library of Congress, officials announced today (June 27). 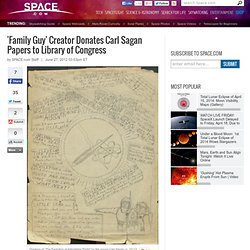 Writer, producer and director Seth MacFarlane helped the U.S. Giant robotic leap may be needed to find aliens - Phenomenica. How You Can Reply to a Possible Alien Message. What's the Latest Development? 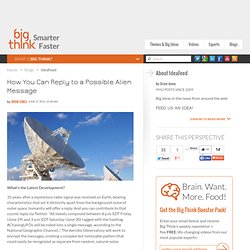 35 years after a mysterious radio signal was received on Earth, bearing characteristics that set it distinctly apart from the background noise of outer space, humanity will offer a reply. And you can contribute to that cosmic reply via Twitter: "All tweets composed between 8 p.m. EDT Friday (June 29) and 3 a.m. EDT Saturday (June 30) tagged with the hashtag #ChasingUFOs will be rolled into a single message, according to the National Geographic Channel... " What the Space Shuttle booster saw. Technology - Rebecca J. Rosen - Get Ready, Because Voyager I Is *This Close* to Leaving Our Solar System. We're on the cusp of one of the greatest scientific accomplishments of all time, but we may not know when the moment strikes. 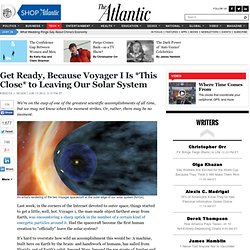 Or, rather, there may be no moment. An artist's rendering of the two Voyager spacecraft at the outer edge of our solar system (NASA) Last week, in the corners of the Internet devoted to outer space, things started to get a little, well, hot. Voyager 1, the man-made object farthest away from Earth, was encountering a sharp uptick in the number of a certain kind of energetic particles around it. Some Newfound Planets Are Something Else. Tiny satellites will use Kinect to dock with one another. 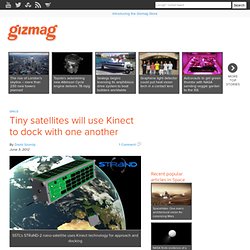 At least, that’s what will happen if Surrey Satellite Technology Limited (SSTL) gets its way. Working in conjunction with the University of Surrey, the UK-based company plans to launch a pair of nano-satellites into orbit equipped with Kinect motion-control sensors that will allow the minisats to seek each other out and dock to form a new, larger satellite. If this technology proves successful, it has the potential to change the way satellites are built, maintained and even disposed of by changing satellites from individual machines into intelligent building blocks.

The new nano-satellite, called STRaND-2, is the latest in SSTL’s STRaND series. Engineer proposes $1 trillion USS Enterprise. An anonymous electrical and systems engineer going only by the moniker BTE-Dan has posted surprisingly detailed plans for a full-scale, functioning Starship Enterprise that he claims could be built in 20 years. 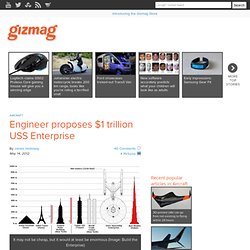 Though it may be tempting to scoff at such lofty ambition, the Build the Enterprise website (up all of one week) includes specifications, costs, mission plan and funding strategies, all suggesting that a serious amount of thought has gone into creating a real world counterpart to the icon spaceship of the TV and movie series, Star Trek. The project appears to be born of Dan's frustration with humankind's present spacefaring efforts. Dan more or less dismisses the International Space Station for its lack of gravity and cramped quarters, describing its toilet facilities as "comical and primitive," and musing how the money may have been better spent. Milky Way Will Be Hit Head-on. Massive black holes stop the creation of new stars. Astronomers are suggesting that the radiation and winds from supermassive black holes at the center of galaxies halts star generation within the galaxy (Image: Shutterstock) Image Gallery (7 images) Just months ago, NASA's Chandra X-ray Observatory discovered record 20 million mph (32 million km/h) winds nearby a supermassive black hole. 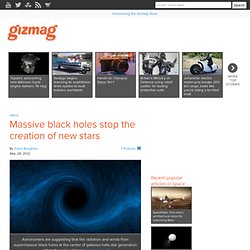 Now astronomers working on ESA's Herschel Space Observatory are suggesting that such incredibly strong winds - whose speed depends on the size of the black hole - are preventing the gas and dust in galaxies from forming new stars, explaining the link between the size of a black hole and the rate at which new stars are formed. View all All large galaxies have a massive black hole at their core, but the relationship between its mass and the rate at which new stars in the galaxy are born has eluded astronomers for over a decade. A paper detailing the findings has been published on the journal Nature. DARPA funds 100 Year Starship to develop human interstellar flight capabilities.

Voyager 1, which is now in the outermost layer of the heliosphere that forms the boundary between the Solar System and interstellar space, is set to be the first man-made object to leave the Solar System. 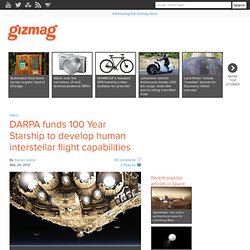 It has taken the car-sized probe over 35 years to reach its current point, but at its current speed of about 3.6 AU (334,640,905 miles) per year it would take over 75,000 years to reach our nearest star, Proxima Centauri. Despite the mind-boggling distances involved, DARPA has just awarded funding to form an organization whose aim is to make human interstellar travel a reality within the next century. There's more water on Jupiter's moon Europa than there is on Earth. High Altitude Parachute Jump from the Edge of Space.

Steve Truglia will attempt to set a new World High Altitude Parachute Record this Summer by parachuting from the edge of space, 120,000 feet (or over 23 miles high). The FAI, (Federation Aeronautique Internationale), will ratify the World Record attempt. A training jump from 52,000 feet will first take place to test all systems from a location within the USA. This will be ratified by the FAI as a European Record. NASA’s NEOWISE survey provides best estimate yet of potentially hazardous asteroids. Potentially hazardous asteroids (PHAs) are a subset of near-Earth asteroids (NEAs) that have the potential to come within five million miles (eight million kilometers) of Earth, and are of a size large enough to make it through Earth’s atmosphere to cause significant damage on a regional, or greater, scale.

NASA’s asteroid-hunting NEOWISE mission has now provided the best estimate yet of the number of PHAs in our solar system, along with their origins and the potential dangers they might pose. While all NEAs have an orbit that brings them within close proximity to Earth, only some of them have orbits that intersect with Earth’s and are of a large enough size to be classified as PHAs. After its initial 10-month astronomical survey mission to create infrared images of 99 percent of the sky, NASA’s Wide-field Infrared Survey Explorer (WISE) was put into hibernation mode in early 2011. Source: NASA WISE mission page. Nasa trains astronauts for asteroid mission. NASA Training Astronauts for Asteroid Mission. Stars in globular clusters form communities. A globular cluster is a spherical collection of thousands – in some cases millions – of stars. A few ball-shaped clusters, such as 47 Tucanae here in the southern firmament, appear to our eyes as diffuse fogs.

However, it is possible to see the individual stars in these clusters using precision telescopes. (Photo: Thomas V. Spitzer space telescope detects light from alien “super-Earth” NASA's Spitzer Space Telescope has detected infrared light emanating from 55 Cancri e, a dark, blazing-hot planet only twice the size of Earth and eight times as heavy. This marks the first time that light has been detected from a planet of such a small size, and the find is telling astrophysicists where to look in their search for signs of life on planets beyond our own. 55 Cancri e was first discovered in 2004 as one of five celestial bodies orbiting the eponymous 55 Cancri star. It is one of only a handful of known "super-Earths" – planets with a mass up to ten times that of Earth – to cross the face of their star from our vantage point, which allows us to learn more about its nature.

Using infrared imagery, Spitzer has gathered that 55 Cancri e is a dark, desolate, and excruciatingly hot place – something to be expected from a planet 25 times closer to its star than Mercury is to the Sun. Dr. Extraterrestrials, The Secret Government, And You. The real life X-Files: Meet the people who have been abducted by aliens. By Eddie Wrenn Published: 16:48 GMT, 30 April 2012 | Updated: 08:08 GMT, 1 May 2012. X Has Lofty Goal: Help Save Humanity from Extinction. NASA dominated American human spaceflight for more than 50 years, but in the 21st century private spaceflight companies are building new space taxis to launch more people into orbit. Is asteroid mining about to begin? Esoteric Astronomy: ‘Secrets in Plain Sight’ (Video)

The future of everything. IBM looks to new technologies for unprecedented data processing challenge. When completed in 2024, the Square Kilometre Array (SKA) will be the largest, most sensitive radio telescope ever created. It will consist of 3,000 individual ground-based dish antennas, linked to act as one big telescope – an arrangement known as an interferometer.

While their combined total surface area will be about one square kilometer (0.39 sq mile), they will be spread out across a geographical area approximately 3,000 kilometers (1,864 miles) in width. In pictures: NASA tracer rockets form ringed clouds at the edge of space. Laser-wielding satellite swarm to deflect asteroids. Solar Storm 'Sounds' Created With Sonification Technology. Asteroid Vesta Has Bizarre Bright Spots, NASA's Dawn Spacecraft Shows (PHOTOS) The Detailed Universe: This will Blow Your Mind. Powers of Ten™ (1977)