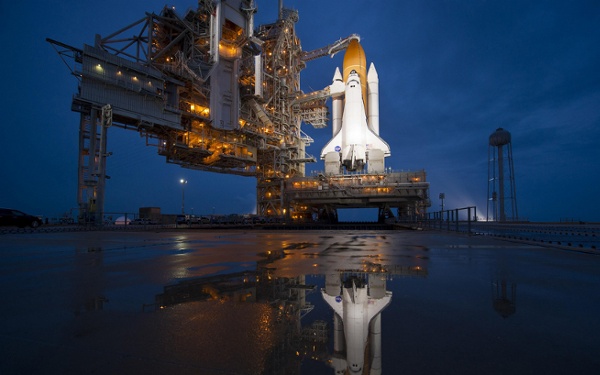 15 Mind-Blowing Featured Images by NASA The NASA Goddard Space Flight Center is home to the United States’ largest organization of combined scientists, engineers and technologists that build spacecraft, instruments and new technology to study the Earth, the sun, our solar system, and the universe. They are also home to some of the most amazing images, visualizations and videos NASA has to offer! Please do yourself a favour and check out their incredible Flickr page which has thousands of images with wonderfully detailed descriptions. Below is a collection of 15 mind-blowing featured images from NASA. » Best Procrastination Tip Ever Post written by Leo Babauta. Your first thought as you look at this article will be, “I’ll read this later.” But don’t.

Seriously jaw-dropping picture of the Sun Need your slice of awesome today? Then check out this truly astonishing picture of a detached prominence off the limb of the Sun: Holy wow! Click to ensolarnate. And I mean it: you want to see the bigger version of this. Incredible Space Pics from ISS by NASA astronaut Wheelock Go Discovery! It was October 23, 2007 at 11:40am EST when I had my first ride to space on Discovery. She’s beautiful… just sad that this will be her last voyage. Looking forward to climbing aboard the flight deck when Discovery arrives at the Space Station in November. (9-23-2010).

NASA Sounds NASA's mission of discovery and exploration is being showcased in a custom-produced Internet music radio station that is crafted specifically to speak the language of tech-savvy young adults. Third Rock - America's Space Station offers listeners a New Rock/Indie/Alternative format. The station is being developed and operated at no cost to the government through a Space Act Agreement with Houston-based RFC Media. Third Rock also will help partner companies fill high-tech job openings in the engineering, science and IT fields. Visit Third Rock. 10 Yoga Poses to Fight Depression and Anxiety The mind, body and spirit are all connected and when a person suffers from mild depression or anxiety, the body is out of balance. Yoga is a series of stretches that helps bring balance to the body; not just focusing on the body’s health, but also on the mind and spirit. Always consult a physician or counsellor if you are having ongoing feelings of depression or anxiety and before trying any new exercise program. 1.