Rustlin' Up some Seafood

Grilled Fish Tacos in Corn Tortillas. Enthusiasts disagree about what makes the ultimate fish taco, but in its simplest form, this iconic dish consists of tender pieces of fish, a little dressed cabbage and a creamy dressing folded into a warm tortilla. 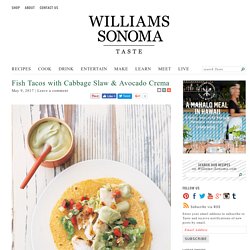 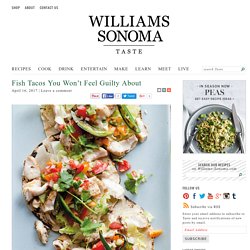 This version is made with healthy grilled snapper, which is even better when it’s grilled over hardwood chips that impart a subtle smoky flavor. Pro tip: Be sure to throw a handful of wood chips in water to soak about 30 minutes before making this dish, then drain them right before adding them to your grill. Grilled Fish Tacos 1 Tbs. canola oil, plus more for brushing 2 jalapeño chiles, quartered lengthwise and seeded 6 skinless snapper or other firm white fish fillets, each 4 to 5 oz. (125 to 155 g) Salt and freshly ground pepper, to taste. 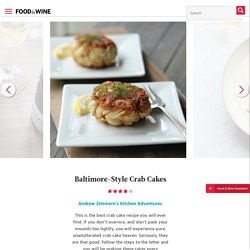 Fish Chowder Recipe. 1 Sauté onions in oil and butter, add wine: Heat oil and butter in the bottom of a large pot (6-qt) on medium heat. 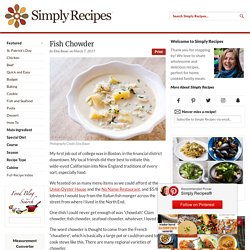 Add the onions and cook until softened, about 5 minutes. Add the wine, if using, and turn up the heat, cook, uncovered until the wine reduces by half. (If not using wine, add 1/4 cup of water with the clam juice.) 2 Add potatoes, clam juice, spices, then simmer: Add the potatoes, clam juice, bay leaf, thyme, salt and pepper, and Old Bay spice. (The potatoes should be just barely covered with the liquid in the pot. Bring to a simmer, then lower the heat to medium and cook, covered, until the potatoes are almost done, about 10-15 minutes. 3 Heat cream: In a separate pot, heat the cream until steamy (not boiling). 4 Add fish to soup, add hot cream: Add the fish to the pot of potatoes and add the heated cream. Keep your eye on the heat! Fish With Toasted Almonds Recipe - NYT Cooking. Salmon with Yogurt-Curry Sauce Recipe. Clam-and-Oyster Pan Roast Recipe - Vivian Howard. Garlic Lovers Salmon In Foil (Baked Or Grilled)

Garlic Lovers Salmon In Foil (Baked Or Grilled) I’ve mentioned on here before that learning to cook as a visiting chef in Barclay’s kitchen has always been– oh, shall we say — a bit of an adventure. 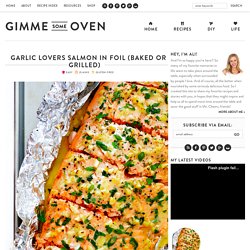 There are always multiple reasons for this. But probably the primary difference between his kitchen and mine is that his oven hasn’t worked for a number of years. Chinese Boiled Shrimp with Ginger Scallion Dipping Sauce. As the summer heat rises, this quick, crazy easy, and fabulous recipe, Boiled Shrimp with Ginger Scallion Dipping Sauce, will get you in and out of the kitchen quickly! 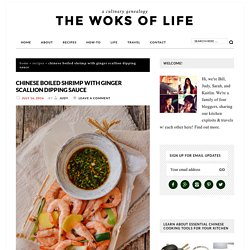 Most people are familiar with boiled shrimp (with cocktail sauce or maybe in a low country boil), but in Asian cooking, the shrimp is cooked very quickly, with the flavor delivery coming from the ginger scallion dipping sauce. This is my version of this common dish. Most of the variation from region to region comes with the sauce, so feel free to change it to suit your own taste! How to Make Spanish Mussels. Aatxe chef Ryan Pollnow’s Fino-Steamed Mussels with Chorizo and White Beans. 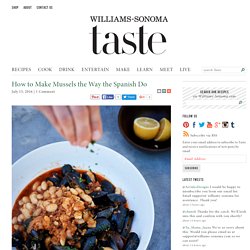 To make the mussels that he served at his Spanish-inspired feast in wine country, Aatxe chef Ryan Pollnow relies heavily on three main ingredients: a blend of aromatic vegetables, mussels (of course), and plenty of chorizo to boost flavor. Start by browning chorizo. He starts by sautéeing fresh paprika-laced chorizo. “Chorizo makes everything better. We should have shirts that say that!” Browning fresh chorizo not only renders flavorful fat, but also toasts the paprika the sausage is spiced with. Browning high-fat chorizo means rendering plenty of lard.

Banana Leaf-Grilled Fish. In this recipe, banana leaves impart a subtly sweet and grassy aroma to fish while also keeping the delicate fillets from sticking to the grill. 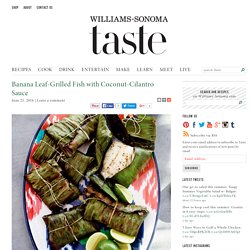 Look for banana leaves in Latin American and Asian markets, where they are sometimes sold fresh and can usually be found frozen as well. Serve the fish alongside steamed rice for soaking up the rich, fragrant sauce. Banana Leaf-Grilled Fish with Coconut-Cilantro Sauce 1/2 cup (4 fl. oz./125 ml) coconut milk Juice of 3 limes. Perfect Fish Tacos - What's Gaby Cooking. Half Baked Harvest - Made with Love. Guys!! 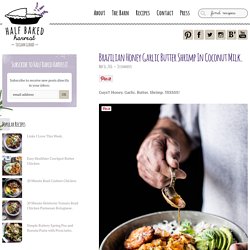 Honey. Garlic. Butter. Shrimp. YESSSS! All done with Brazilian inspired flavors…which yes, is just as good as at sounds. So let me explain this recipe, as it has a bit of a story. Technically they went on this trip for “work”, but let’s be real, chillin on the beach and drinking tequila sounds a lot more like vacay. Speaking of the fam, some of them went to Cincinnati and then up to Cleveland over the weekend to celebrate my cousin Matt’s graduation. Half Baked Harvest - Made with Love. {This post is sponsored by Kraft-Heinz. 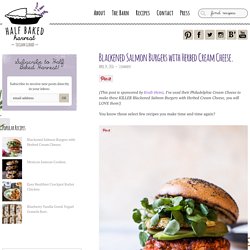 I’ve used their Philadelphia Cream Cheese to make these KILLER Blackened Salmon Burgers with Herbed Cream Cheese, you will LOVE them!} You know those select few recipes you make time and time again? These burgers are going to become one of THOSE recipes. I’m talking week after week, month after month, you will continually find yourselves making these salmon burgers. Salmon Teriyaki Bowls. Salmon Teriyaki is one of my favorite Japanese-style dishes and even competes with my favorite authentic Japanese dish, Unagi Don (grilled eel over rice).

The caramelized teriyaki sauce combined with the tender, fatty salmon is a killer combination, and it’s easy to make at home. If you have ever ordered this dish in a Japanese restaurant and enjoyed it, then I assure you this recipe will definitely make it into your weekly rotation, and at a fraction of the cost. Use our recipe for Garlicky Broccoli as a side dish, and you’ll have all that you need for a quick and satisfying dinner. One word about salmon––aside from the obvious advice of getting fresh filets––is that you actually want to get some pieces that have some good fat in them, which makes them extra tasty. Look for filet cuts that have large white lines of fat near the belly portion of the filet and try to avoid getting the tail piece. Scallops with Charred Scallions Recipe - Alex Knezevic.

Simple Shrimp and Asparagus Risotto. Shrimp and Asparagus Risotto is creamy and delicious. Elegant and fool-proof, too! Echo, echo, ECHO… HAP-py New Year! (horns blow, confetti falls, smooches abound, etc., etc.) Shrimp and Cabbage Crunchy Tacos - Bev Cooks. I’m posting FOOOOOD glory be to all the pigeon angels and baby koala bears. And tacos, none the less. Had to start back strong, ya know. Go tacos, or go home. Egg Batter Pan-Fried Flounder With Green Garlic Recipe. Chipotle lime fish tacos. If you’re old enough to remember, you may recall a time when fish tacos were not popular in Texas. While I’m sure some people served them at home, my family did not nor did you see them very often on restaurant menus, even along the coast. Fish Poached In Buttermilk Recipe. Norwegian Fish Cakes with Dill Mayonnaise Recipe - Magnus Nilsson. Shrimp In Thai Coconut Sauce – foodiecrush. I feel that I’ve led you astray.

That I didn’t deliver. That I was just a being a big tease. Actually, there were a plethora of you who said that’s exactly what I was, when you e-mailed me in droves asking where the recipe was for the photo of this dish in my Friday Faves without sharing the recipe. You’re right. I owe you this recipe. This recipe was my divine inspiration when I was put on the spot for a cooking challenge at General Mills HQ.

Curry Crab Rundown Recipe - Bradford Thompson. Mussel and Chorizo Soup Recipe - Steve Corry. Gingered Salmon with Grilled Corn and Watercress Salad Recipe - Quinn Hatfield. How to Make Crispy-Skinned Fish. Every other Thursday, we bring you Nicholas Day -- on cooking for children, and with children, and despite children. Also, occasionally, on top of. Today: A weeknight salmon recipe with a secret trick (and the crispiest skin). The life cycle of a salmon is the sort of incredible, Upworthy-ready story that you find in picture books, not textbooks: a fish that survives in fresh and saltwater; that commutes home against a raging current; that somehow returns, guided by a mere memory of a smell, to its natal home to give birth. This is more than a story. It’s mythology. But like all heroes, salmon has a tragic flaw: It is pink. I will not argue that salmon is not uniquely delicious -- that fat, that mouthfeel -- but I will argue that it has been uniquely victimized by its hue.

What do I want? But as Donald Rumsfeld famously said, you go to dinner with the fish you have, not the fish you might want or wish to have at a later time. So here we are, alone with our defrosted salmon. Really. Seared Salmon with Anise-Cucumber Salad Recipe - Andrea Reusing. Pesto Baked Salmon Foil Dinner - WhitneyBond.com. When it comes to healthy dinner options, salmon is one of my favorites! How to Grill Oysters. Sea Bass with Prosciutto and Sage Recipe - Katie Caldesi. Half Baked Harvest - Made with Love. Since we did salad yesterday, we get to do butter and cheese today. Or at least that’s how I look at it. How to Never Overcook Salmon (or Other Fish) - Genius Recipes. Every week, Food52's Executive Editor Kristen Miglore is unearthing recipes that are nothing short of genius. Today: The most foolproof way to cook any fish—and a petition for a new cooking term. The most unfair implication of slow-roasting is the slowness part.

Recipe: The Perfect Fish Taco. Food52. Half Baked Harvest - Made with Love. Hmm, so I don’t know where to start today. It’s one of those “feeling kind of chatty” days for me. How to Cook Squid. Look, squid isn’t weird anymore. Food52. This summer, Christine Burns Rudalevige of The Family Fish Project is on a mission to help us cook and eat more seafood at home. Food52. Rainbow Fish Taco Nachos. Shrimp Pasta with Roasted Red Peppers and Artichokes. Easy Chimichurri Shrimp. Recipes from The Nest. Hawaiian Shrimp Truck Special (Garlic Lemon Butter Shrimp). Crispy Buffalo Wing Shrimp with Blue Cheese Grits. Food52. Don't Be Fooled By The Fishy Ingredients: This Burger Is Delicious.