How to cook the perfect paella 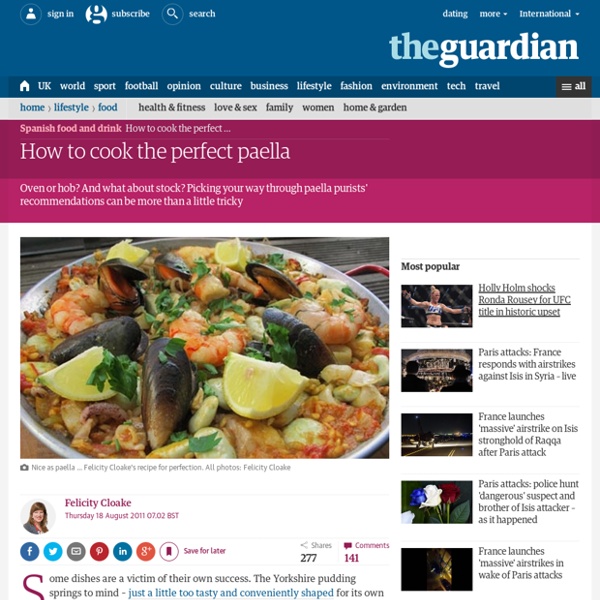 Some dishes are a victim of their own success. The Yorkshire pudding springs to mind – just a little too tasty and conveniently shaped for its own good; the Scotch egg suffers from a similar problem. One of the saddest examples is the brave paella. As Catalan author Josep Pla put it, the "abuses" committed against Spain's most famous dish are "excessive – an authentic scandal". Jenny Chandler reports in The Real Taste of Spain that shoppers in Valencia's Mercat Central could be persuaded to agree on only thing – fish and shellfish are "absolutely out of the question". Rice is a tricksy ingredient and, just like risotto, certain rules must be observed to achieve paella nirvana. Cooking with gas This is controversial. The Harts' recipe is much simpler. Chef José Pizarro gives a recipe in his book Seasonal Spanish Food that follows a similar process, but he covers the dish with foil for the last eight minutes of cooking. Two essentials Sundries Perfect paella Serves 2-4, depending on hunger Related:  Seafood • Pasta and Rice and Gnocchi

C H E W I N G T H E F A T: Vietnamese Shrimp and Pork Belly with Sweet and Spicy Sauce Ever since my last trip to Hong Kong, where, on our last night there, we went to a Vietnamese Restaurant called “Pho Lemon” (25 Elgin St. Central, TEL: 2523-8272) I have wanted to cook Vietnamese food. There’s likely nowhere on earth where you can find such a confluence of Asian cuisine as there is in Hong Kong. During my last trip there, we’d eaten Japanese, Korean, Malaysian and of course, Chinese food from Hunanese to Cantonese. When I got home, I almost immediately bought a book called “Authentic Recipes from Viet Nam”, by Trieu Thi Choi, Marcel Isaak and Heinz Von Holzen. If it’s true that too many cooks spoil the broth, this book has at least two too many. As Julia Child said, “A cookbook is only as good as its worst recipe.” But I have soldiered on and finally, thanks to an article in May’s Bon Appetit, I struck culinary gold. This is a wonderful dish! I fell in love with Pork Belly several years ago at Joe’s Restaurant in Venice, CA. Shrimp are a staple in our house.

Cookbook Review: Weekend Paella, Pan Not Included - Los Angeles Restaurants and Dining - Squid Ink click to enlarge Fire and rice. No, James Taylor has not released a new album. We're talking about paella. The just-released cookbook - with a very cool white cloth cover trimmed in red stitching, incidentally -- is highly focused on the subject at hand. Great. First, a side note for the paella-averse: Paella pans are shockingly inexpensive for the size, or at least to our American kitchen-excess eyes. thewanderingeater.com Herraiz's Squid Ink Paella At Fogón Still, this is what we can only describe as a "paella enthusiast's" sort of book. And yet, that rather fussy attention to detail works here, unlike in so many cookbooks. Herraiz also devotes much of the book to stovetop-to-oven cooking (traditional paella is cooked over an open fire). To finish, there is sweet paella rice with apples and Camembert, a goat milk-rhubarb and goat cheese version, and for summer, a sweet strawberry-almond-rosemary version. Damn.

Pad Sathor - Kung ผัดสะตอกุ้ง - Pad Sathor - Kung - Fried Sathor is a pod-seed fruit that is grown and eaten in the South of Thailand - it has a rather oily and acrid taste and aroma. Some variations off the fruit have a spicy hot taste to them. The smell of these beans is inimitable, some ffinding it too acrid to be attractive to the tastebuds. The sathor beans grow in pds on a tree which can reach up to 90 feet in height. the pods are normally cut down using a bamboo pole with a machete stuck at a 90 degree angle in the top of the pole to cut the pods down. I love Sathor when fried with shrimps, or even chicken and Southern Yellow curry paste. Ingredients: 8 Fresh Giant Shrimps, 1/2 a cup of pork mince, 2 cups of peeled sathor beans, 15 small red chillies, 10 cloves of garlic, 1 tablespoon of Kapi (shrimp paste), 1 teaspoon of lemon juice, 1 tablespoon of sugar, 1/2 tablespoon of Nam Pla (fish sauce), and 3 tablespoons of vegetable oil for frying. Preparation Method About Sathor Ingredients:1.

The simplest paella recipe If you want an easy-to-do simple paella recipe, just knock on us... This is the easier paella recipe you can find anywhere! Serves: 6-8Difficulty: IntermediatePreparation time: 60-90 minutes Ingredients 1/2 pint of olive oil2 bowls of rice (1lb. 5 oz. approximately)5 bowls of fish broth1/2 lb. of shrimps2 mid-sized squids2 lb. of mussels or clams1 green pepper1 red pepper1 small can of peas1 small onion2 tomatoesSaffron1 clove of garlic (optional)ParsleySalt Preparation Start to heat half of the oil and once warm toss the chopped onion. In a pot, begin to cook in cold water the shells of the shrimps, reserving the tails. Add the rest of the oil to the paella pan. Meanwhile, in a mortar mash a little bit of garlic (optional), the parsley and the saffron, with a little bit of salt so that it doesn't slip, and it wet it with a couple of soup spoonfuls of temperate water. Let it cook about 20 minutes. Serve it with some big clusters of lemon without peeling like decoration. See also...

C H E W I N G T H E F A T: Review of Fatty Crab and a recipe for a one-dish wonder called Nasi Goreng with Shrimp Now that it’s made the trek north to the Upper West Side, it’s become one of our two favorite Asian restaurants. It’s a funky place born of owner Zak Pelaccio’s love affair with Malaysian cooking following a stint cooking and eating in Kuala Lumpur. I’d never had Malaysian food ‘til Fatty Crab arrived on Broadway. The restaurant serves Malaysian street food in an atmosphere that imitates that influence. The open kitchen lets you in on another secret. Jalan Alor is a food haven in Kuala Lampur, a downtown street that was once a red-light district but is now home to the kind of food Fatty Crab does brilliantly. If you want a fork or knife, you’ll have to ask for one. Nasi Goreng, my dear Malaysian friend Ann Lee tells me, means nothing more than Fried Rice. Now I hate to ask you to wait until it arrives but it’s truly the only ingredient that is consistently found in every recipe for Nasi Goreng and I doubt it would be the same without it. 1. 3.

Paella Fest (good pictures) Posted by johngl I’ve done a couple of other posts on paella (Paella and Paella Cookoff?) so the fact that grown men venture into 100°+ Texas temperatures and cook mass quantities of food in huge pans over an open fire should come as no real surprise. So let’s leave the mere amateurs to cooking the mundane (hot dogs and burgers) on their shiny new stainless steel grills and come join me for more of this open fire cooking. Chicken thighs searing skin-side-down over an open fire The firepit is about 5 feet long and 3 feet wide. But before we talk about the fire-pit cooking, we should delve into what makes a good paella. I firmly believe that the most important part is creating a proper sofregit. For this rendition, we started with 20 fresh Roma tomatoes and four large onions. Start with the onions, cutting them into a 1/4″ dice. This takes longer than you might think. Then there is the tomatoes. After that, a fine chop will render a reasonably smooth looking sauce: Yes, this is a little wet.

Feijoada, Brazilian Black Bean Stew Recipe Hank introduced me to this Brazilian black bean stew a couple months ago and I couldn’t stop eating it. It is outstanding. And perfect for the chilly weather we’re having these days. ~Elise This is another of those big, hearty, meat-and-bean stews that seem to be the national dish of one country or another. Some versions are a little spicy from the sausages, others totally mild. One common ingredient is carne seca, a salted, dried beef often available in Latin markets. Black beans are a must in this recipe if you want it to be authentically Brazilian. Ingredients Method 1 Pour boiling water over the black beans and let them sit while you prepare the rest of the stew. 2 Heat the olive oil in a large pot over medium-high heat and brown the pork shoulder. 3 Add back the pork shoulder, and the other meats and add enough water to cover. 4 Add the tomatoes, stir well and taste for salt, adding if it's needed. Serve with white rice and hot sauce.

C H E W I N G T H E F A T: Melissa Clark's Salmon with Anchovy-Garlic Butter Before you turn the page on this wonderful dish, let me assure that those dried-out and dreadful anchovies that someone left atop your last Caesar Salad are not at work here. Instead, these flavor makers are worth a great deal more than their weight in making this fast and easy dinner worthy of any Meatless Monday. The New York Times featured Melissa Clark's recipe last week and then added it to its "Food" Email blast this week. And for good reason. It's a winner. I love Melissa whose recipes pepper this blog because they are always easy for a home cook to achieve using combinations of ingredients most of us haven’t thought of combining before. It is worth it to pay more for these anchovies. butter is used to ‘fry’ the fish in and the other half makes a quick pan sauce to spoon over the salmon once it emerges from the oven. Recipe for Melissa Clark’s Salmon with Anchovy-Garlic Butter Serves 4 (but if serving two, stick to the recipe for making the butter and do not halve it.)