Lemon-Pepper Baked Orange Roughy. Fish Pakoras with Peach Chutney Recipes. 5 Salmon Recipes That Answer the Question, "What's for Dinner?" While chicken breasts may get most of the praise in the quick-fix dinner department, salmon shouldn’t be forgotten. 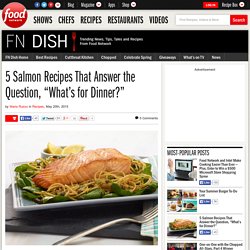 In fact, this speedy seafood may even give its meaty counterpart a run for its money as far as the clock is concerned. When portioned into individual fillets, salmon takes mere minutes to cook, and it pairs well with a variety of flavors and ingredients — think savory glazes, sweet sauces and spicy spice rubs. Since it’s a hearty fish, salmon stands up well to high-heat cooking methods like grilling, though the key to turning out moist, tender results is to not overcook the fish, no matter if you’re preparing on the grill, on the stovetop or in the oven.

Read on below to check out six of Food Network’s best-ever speedy salmon dinners, each ready to eat in 35 minutes or less. Whole-Wheat Spaghetti with Lemon, Basil and Salmon (pictured above) A single recipe that delivers a complete, well-rounded meal — healthfully and in a hurry? Salt-And-Vinegar Potato Chip Fish Recipe. English-Style Cod & Potato Pie. Sushi Rice Recipe. It may not be the most exciting part of sushi, but the vinegared rice or sushimeshi (鮨飯) is what makes sushi sushi. 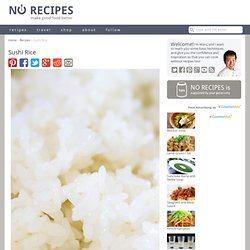 By some accounts, the word sushi is a contraction of the words su which means “vinegar” and meshi which means “rice”. Another creation legend is that the kanji character for sushi “鮨” resembles the Chinese character for salted fish “鮓” and so perhaps the origins of sushi lay somewhere in southern China. In any case, raw fish without the rice is just sashimi. In Japan, where hundreds of varieties of fresh sashimi-grade fish are flown in from around the world to local fish markets, the best sushi restaurants differentiate themselves based on their technique, not just the variety and freshness of their fish. The rice in particular is what separates the truly extraordinary sushi restaurants from the merely good, and how they make it is a closely guarded secret. Great sushi rice teeters the line between tender and hard. Equipment you'll need: Ingredients Instructions. California Roll Recipe.

I tend to categorize American sushi restaurants into two buckets: traditional places where you can get a wide selection of fresh nigiri sushi, and the non-traditional places that have pages upon pages of inventive makisushi. 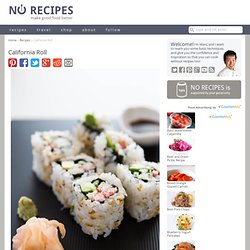 If I had to choose between the two, I’d take the one with the stoic Japanese dude forming little pillows of rice with a thin slice of aquatic bliss on top, but that’s not to say I don’t enjoy the raucous places with frat boys slinging sake bombs, phonebook sized menus, and of course the California Roll. As the name implies, California Rolls were invented in the late 1960′s by a creative sushi chef in Los Angeles. Lamenting the lack of sushi grade fish in the US he decided to turn to ingredients that were readily available for his new creation. Shrimp-and-Avocado Sushi Rolls Recipe.

Best Fish Tacos Recipe. It wasn’t long ago that beef cheeks and pork cheeks went from being a throw-away cut of meat to a highly sought-after delicacy served in some of the priciest restaurants. 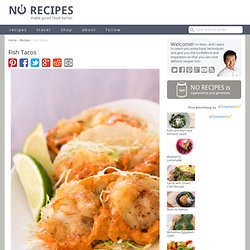 I’m willing to wager that fish cheeks will be next in line for this trend. So why do cheeks taste so good? Whether it’s a cow or cod, the cheek muscles get a lot of exercise and they also store a lot of fat. Just as chicken leg meat has more flavor than breast meat, muscles that get exercised have more flavor. In the case of fish, the cheeks are plump and moist, with a pleasantly fibrous texture that’s a dead ringer for scallops. Seasoned with spices and coated in a light crispy beer batter, fish cheeks make the best fish tacos! The cheeks need to come from a good sized fish, otherwise there’s just not a lot of meat there.