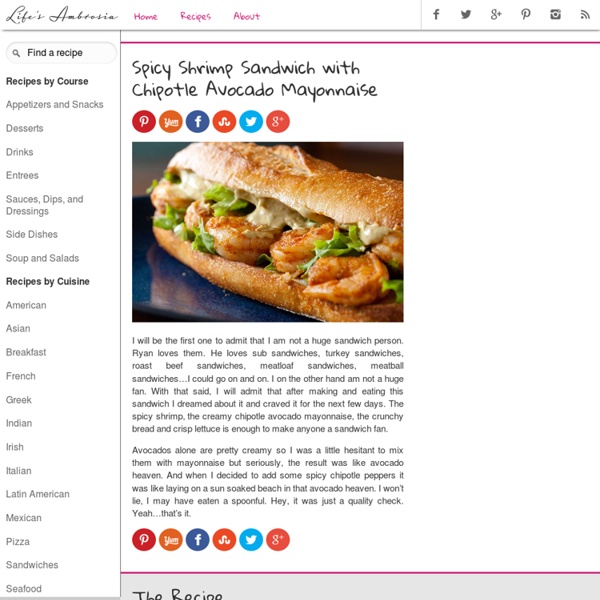 I will be the first one to admit that I am not a huge sandwich person. Ryan loves them. He loves sub sandwiches, turkey sandwiches, roast beef sandwiches, meatloaf sandwiches, meatball sandwiches…I could go on and on. Avocados alone are pretty creamy so I was a little hesitant to mix them with mayonnaise but seriously, the result was like avocado heaven. Related:  Seafood

Tender Tasty Teriyaki Chicken Kebabs | Sortachef The temperature hit 70 the other day here at Chez Bullhog. That hasn’t happened since September, according to the weather guys, but I really wouldn’t know. When you live in a city where people put on sunglasses for light rain, you learn to optimize conditions; around here, one really nice weekend can instantly wipe out months of bleary weather. So – sunshine in Seattle, the University street fair in full swing, the smell of freshly mown grass, everybody out in shorts and flip-flops and flowers blooming all over the place. Here’s how to make succulent and always-tender chicken the way we just love it. Tender Tasty Teriyaki Chicken Kebabs Tender Teriyaki Chicken Kebabs on the grill Makes 6 good-sized skewers For the Teriyaki sauce: ¼ cup soy sauce ¼ cup white wine ¼ cup water 3 Tablespoons of brown sugar 1 teaspoon of white vinegar 2 teaspoons shaved fresh ginger (see note below) 2 cloves garlic, pressed or finely chopped For the kebabs: Teriyaki sauce for marinade ½ of a medium-sized yellow onion

Oven-Fried Onion Rings I really love onion rings, and if I had to pit a good onion ring against a good french fry... well it would be a hard decision. But the problem with onion rings is that so often the are sub par and disappointing. Either the breading is too thick, the onions are too thick or thin, or the onion is undercooked. Biting into a crispy piece of breading only to be met with raw onion is the worst. For several years now I have been wanting to make onion rings at home. Leave it to Cook's Illustrated to come up with just that. In case you are wondering about the dipping sauce I have pictured, I tried to recreate the dipping sauce served at Outback (or Longhorn?) 1/2 cup all-purpose flour1 large egg1/2 cup buttermilk1/4 tsp cayenne pepper1/4 tsp paprikasalt and black pepper30 saltine crackers4 cups kettle-cooked potato chips2 large yellow onions6 Tbs vegetable oilAdjust the oven racks to the lower-middle and upper-middle positions and preheat the oven to 450 degrees. Meanwhile, prep the onion rings.

Low-Fat Fish Dishes : Ceviche Tostadas CBS Entertainment | About CBS Interactive | Jobs | Advertise © CBS Interactive Inc. All rights reserved. | Privacy Policy | Ad Choice | Terms of Use Sesame Seared Tuna with Lime Ginger Vinaigrette Sunday, April 26, 2009 In conjunction with my podcast with Michael Ruhlman’s Ratio: The Simple Codes Behind the Craft of Everyday Cooking. And true to the book’s goal, I didn’t use a recipe to develop the Lime-Ginger Vinaigrette for the Sesame Seared Tuna. After a quick check in the refrigerator, I had one good key lime and a nub of ginger…so following Ruhlman’s ratio for 3 parts oil to 1 part vinegar, I whisked together this concoction. Yes, maybe you already know a vinaigrette’s 3:1 ratio, but how about a ratio for Hollandaise, Pizza Dough, Crepe, Sausage, Brine, Custards, Caramel Sauce, Pound Cake, Biscuit Dough plus 22 more formulas? Get Michael’s book – you can buy a signed book (just tell him what you want inscribed in the book) directly from Michael Ruhlman or unsigned (slightly cheaper) from Amazon. Listen to my steamy podcast with Michael Ruhlman. One of Michael Ruhlman’s essential tools in the kitchen is his scale. . Smear wasabi on both sides of the tuna. Serves 4 as appetizer

Chicken Enchiladas Recipe | Poormet I asked Alicia what she felt like for dinner. She responded with, “Chicken enchiladas!” I then asked Google how to make enchiladas. Tyler Florence responded with, “Chicken, random veggies, tortillas, chilies, cheese, and spices.” In the past, our enchiladas also included some rice on the inside… adds an extra texture and fills it out quite nicely. Alicia was tasked with the chicken (since she hates chopping onions). The sauce started with a saute of the onions, garlic, and chilies, then ended with a can of stewed tomatoes. A few minutes later, the chicken was added back to the pan and mixed thoroughly with the sauce. The tortillas were doused in enchilada sauce, filled with the chicken mixture, and then placed seam-side-down in the baking pan. Add your favorite toppings and go to town. If you cut back on the cheese, you can almost consider these to be fairly healthy. Chicken Enchiladas – All the Mexican flavors you are looking for in a highly modifiable recipe to suit your needs. Salt

Cheesy Spinach & Bacon Quesadillas Some nights a girl just wants to be lazy when it comes to dinner. Usually, this brings to mind the little blue box of mac & cheese that we all know so well. Or maybe slapping a slice of cheese between some bread, toasting it, and calling it a day. I wasn't in the mood for fixing dinner tonight, but I wanted something that was still just a little bit special, so I rummaged the fridge to see what I could come up. Somehow, I ended up with a counter full of cheese, bacon, cream cheese, tortillas, and some spinach. You can’t go wrong with those ingredients, right? This is how I ended up with Cheesy Spinach & Bacon Quesadillas. The measurements are more of an approximation since I just eyed it, but you get the idea.Cheesy Spinach & Bacon Quesadilla (makes 4 quesadilla’s) Printable Recipe 4 flour tortillas 2oz cream cheese 1/2 cup grated cheddar cheese 1 cup fresh spinach 4 slices bacon, cooked crisp 1. 2. 3. 4. 5. Enjoy! Amber

Healthy Make-Ahead Lunches : Maple-Mustard Grilled Salmon CBS Entertainment | About CBS Interactive | Jobs | Advertise © CBS Interactive Inc. All rights reserved. | Privacy Policy | Ad Choice | Terms of Use Bang Bang Shrimp The one and only time I ate at a Bonefish Grill was about 5 years ago on a work trip in North Carolina. We went to Carrabba’s the night before and I believe we wrapped the trip up with Applebee’s on our way to the airport. My idea of food hell, most of my coworker’s idea of a good meal. When someone suggested an appetizer of fried calamari at Carrabba’s the first night and one of my coworkers looked at her like she had 5 heads having never heard of calamari before, that’s when I knew it was going to be a fun meal. I have no idea what rock he spent the first 23 years of his life living under but I sure as heck tried to find out during dinner. The answer? Southern Jersey. It’s funny how vividly I remember that trip which is one of maybe 100+ over the past 5 years all involving shitty chain restaurant meals but between the calamari incident and the Bang Bang Shrimp at Bonefish, it sticks out in my head. Those shrimp were appropriately named because 5 years later I still think about them.

Lasagna Stuffed Shells Recipe | Poormet Whenever I go to an Italian restaurant I order one of two things, lasagna or some sort of alfredo. It is something I could eat everyday but am too lazy to make it at home… ever… it just takes too damn long. So, in an attempt to decrease the time it takes to make lasagna (and because I stumbled across a post somewhere) I was going to do some sort of lasagna spin-off. This did not save me anytime at all. I can’t really call a post mine without there being some disgusting looking mixture of ingredients. The meat mix was half ground beef half sweet sausage. Next up, I got the sauce rolling and started cooking the shells according to their box. The sauce was stole from “The Worlds Best Lasagna” on allrecipes: onions, garlic, crushed tomatoes, tomato paste, tomato sauce, and sugar. As soon as I started stuffing these beasts I realized that I was not saving myself any time or effort… and there probably isn’t anyway to cut the time commitment down and still produce a worthwhile lasagna. Sauce

Roasted Parmesan Asparagus I love asparagus. From their flowery little heads to their crunchy stalks, I could eat it all day long. My favorite way to fix it is really yummy and just as quick and simple. I’m all for quick and simple side dishes! Roasted Parmesan Asparagus(serves 2) Printable Recipe 12-15 pieces of fresh asparagus 1 tbsp olive oil sea salt (to taste) fresh ground black pepper (to taste) 1/4 cup freshly grated parmesan cheese 1. Serve hot and enjoy! Amber Cara's Cravings: Curried Lentils and Butternut Squash I’m highly considering starting a Post-It Note habit. As much as I’d like to think my brain is sharp as a tack, I’m finally ready accept that it it just can’t permanently record all the little reminders I need to help me through life as fast as I think of them. My Post-It Notes would have reminders like: “Put your wet clothes in the dryer before they get all damp and stinky” (too late) “Mail your cousin that DVD full of cute pictures you took at her son’s birthday party” (despite the fact that I drive by a blue mailbox every day 1/4 mile from my house) And, “you don’t have to be rockstar every night of the week, making something completely new and different, when there’s almost five year’s worth of recipes you really liked eating sitting right here.” Which brings me to a few tips I turn to when it comes to photographing food that’s less than strikingly gorgeous. Second, think about what you can do to make the picture interesting. Next, garnish, garnish, garnish!

Kung Pao Shrimp Ok, I’ll be honest. I have no idea if this really qualifies as “kung pao” anything. I just really like that phrase. Bring me to a PF Chang’s or any Chinese restaurant and you’d be pretty safe making a bet I’ll order something with those words in front of it. It’s fun to say, it’s spicy and it’s one of the few Chinese dishes that doesn’t have at least one rando ingredient that makes you question what you’re chewing. I get stumped on lunch a lot. I’m always super skeptical about the turnaround time for Chinese food. I take all the skepticism back though after this. It’s spicy, sweet and salty and I guarantee you’ll be licking the sauce off your fingers. Kung pao shrimp Sweet, spicy and salty kung pao shrimp made in minutes. Author: Gina Matsoukas Recipe type: shrimp Serves: 2 Ingredients Shrimp 1 lb. large shrimp, peeled & deveined 1 tablespoon ginger, minced 2 cloves garlic, minced 1 hot red pepper, diced 4 scallions, chopped 1 tablespoon extra virgin olive oil Sauce Instructions