The diaries of nearly 4,000 World War One soldiers are now online 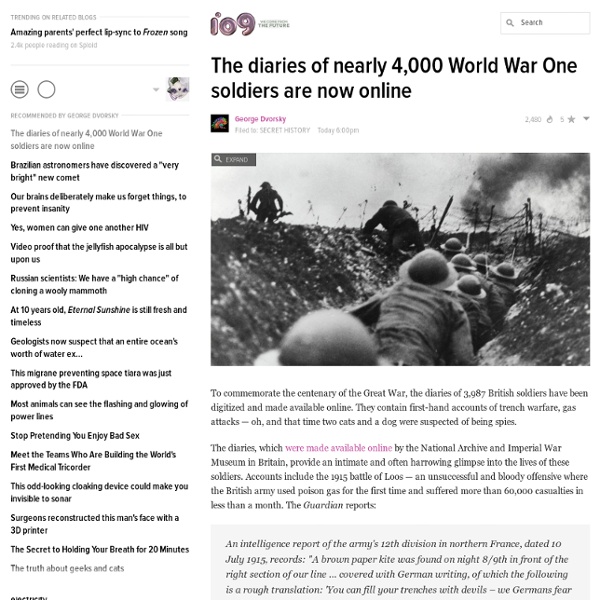 Related:  Seeing the Trees through the Forest • 2 • To be read

I paid a woman to be my friend at a Tokyo Maid Cafe I really don't see why this is creepy. In fact, it seems a bit more up front and honest than the atmosphere in a strip club - you're essentially paying for attention and affirmation, as opposed to the creepy psuedo-sexual vibe in a strip joint or something way farther down the spectrum than this. Then again, Japanese culture never really pinged me as so weird, and the concept of Host Clubs and Maid Cafes don't weird me out very much. @phoenix: Strip clubs are pretty up-front and honest too. Ever heard the sound of a nuclear bomb going off? Historian unveils one of the few surviving audio recordings of blast from 1950's Nevada tests By Eddie Wrenn Published: 11:49 GMT, 16 July 2012 | Updated: 16:22 GMT, 16 July 2012 Troops of the United States Sixth Army after an Atomic blast at Yucca Flat in Nevada on June 1st 1952 They are surely the most horrifying offshoot of modern technology - nuclear warheads which can smite hundreds of thousands of people dead within seconds, and leave lasting scars on a landscape for generations. And while most of us will have seen archive footage of nuclear explosions before, one thing we are unlikely to have heard is their sound.

166 Documentaries To Expand Your Consciousness By: Higher Perspective Here is a list of over 100 documentaries you can watch for free online. They are about Science, Consciousness, ETs, you name it. It’s a smorgasbord of fascinating subjects to learn about. If you find a dead link please let us know and we will find another to replace it. Enjoy! 1. Edge of the abyss Daddy’s little girl … Michael Schofield with his daughter, Janni, in 2006. The first weeks of Janni's life, my wife, Susan, and I are taking lots of home video, imagining her watching these tapes alongside us and her friends as a teenager, pretending to be mortified, but happy on the inside knowing how important she's been to us from the beginning. About a week into her life, she stops sleeping, aside from 20 to 30 naps within a 24-hour day. We're still recording, though.

Filippo Tommaso Marinetti Childhood and adolescence[edit] Emilio Angelo Carlo Marinetti (some documents give his name as "Filippo Achille Emilio Marinetti") spent the first years of his life in Alexandria, Egypt, where his father (Enrico Marinetti) and his mother (Amalia Grolli) lived together more uxorio (as if married). Enrico was a lawyer from Piedmont, and his mother was the daughter of a literary professor from Milan. They had come to Egypt in 1865, at the invitation of Khedive Isma'il Pasha, to act as legal advisers for foreign companies that were taking part in his modernization program.[1]

The Dawn of A New Age in Medicine: Physics Offers A Unified Field Theory of All Disease . . . MUST, MUST READ!!! - Galactic ConnectionGalactic Connection There is one salient difference between nutrients and synthetic drugs of “modern medicine” which stands in stark relief. Nutrients all deliver electrons. Drugs and vaccines all deplete electrons. It is almost impossible to convey the import of this gargantuan paradigmatic shift for medicine. A 20 Year-Old Got Appendicitis and This Was His Hospital Bill A 20 year-old man came down with appendicitis in October of this year. He posted the bill on Reddit and it has gone viral. The US Health Care system is a topic of much debate, not only in the US but around the world.

Meditation and Neuroplasticity: Five key articles Meditation not only changes our mind but also our brain – this is what more and more neuroscientific research suggests. Neuroplasticity – the change of brain structures as a result of experience – is considered to be one of the most important discoveries of neuroscience. Over the last 10 years evidence has been growing that not only the acquisition of navigational knowledge by London Taxi drivers (see video) or learning a new motor task like juggling (see article), but also meditation practice can lead to significant changes to brain structures.

Forgotten Nations History Rome annihilated Carthage to ensure it would never again rise as a major threat. The Ottomans forever ended Byzantium’s glory. The vast armies of Persia were repeatedly beaten back by the Greeks, subjugated by the might of Alexander, and destroyed by the rise of Islam. The fates of once great and proud nations fill the pages of history books—and then there are those forgotten powers even the history books seldom mention. My Daughter’s Homework Is Killing Me - Karl Taro Greenfeld What happens when a father, alarmed by his 13-year-old daughter's nightly workload, tries to do her homework for a week Charles Gullung Memorization, not rationalization.